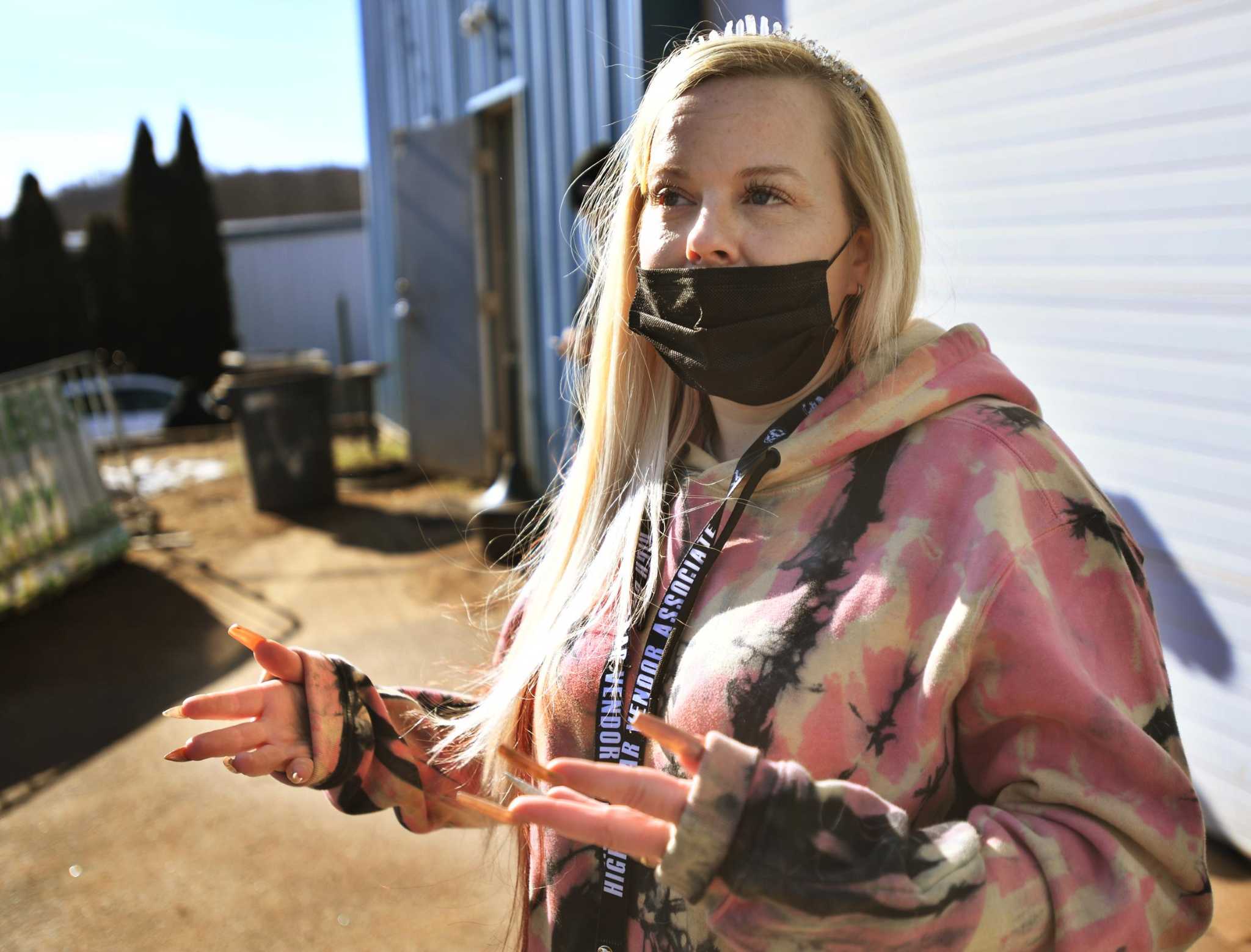 Seven months into the legal recreational marijuana landscape, Connecticut’s previously underground cannabis community is enjoying public consumption parties where growers show off flower specimens in what they believe is a gray area in the law.

Groups such as the CT CannaWarriors, High Bazaar and the New England Craft Cannabis Alliance, which have been advocating for years for full legalization as nearby states, including Massachusetts, opened recreational sales, now sponsor a weekly out-in-the-open vendor assembly and smoke-in on private property in Hamden.

And if people want to take home small plastic baggies of dried marijuana flowers, gummies or chocolates, that’s between them and the exhibitors, under the rubric of “gifting.”

“They seem to be using the gifting mechanism quite effectively,” said Hamden Mayor Lauren Garrett, noting that the town has a task force preparing to support the local sales — and taxing — of recreational marijuana.

“In general, I am glad that the state of Connecticut passed the cannabis bill. The cannabis bill did leave this window where it is legal with the mechanism of gifting. We can’t tax cannabis at this point.”

Garrett said the benefits of supporting the budding cannabis industry go beyond the extra revenue that host communities will see.

“There are going to be a lot of dry communities out there and we’re looking forward to taking those economic-development opportunities,” she said, emphasizing the associated benefits of overall town improvements, including ancillary business opportunities.

The state Department of Consumer Protection, which is administrating the rollout of recreational cannabis, has no jurisdiction over the events like the ones held each Saturday in Hamden. The agency is instead working to establish the taxable retail market to begin later this year. The law that took effect last July 1 allows those 21 and over to possess up to 1.5 ounces of cannabis, and up to 5 ounces in their homes or locked in their car trunks or glove compartments.

State law prohibits exchanging anything of value for cannabis products. People may “gift” recreational cannabis to others, but may not sell it without a cannabis license, including giving it away at the same time as another transaction.

“The Hamden Police Department advises that the organizers of any marijuana-related events operate within accordance of local, state and federal laws,” Detective Sean J. Dolan, the agency’s public information officer, said in a statement, declining to comment further.

For now, the weekend party and growers market will continue.

“First and foremost, this is about the culture,” said Joseph Raymond Accettulo, founder and president of the New England Craft Cannabis Alliance, whose years lobbying reached its goal in 2021, when the General Assembly approved legalizing marijuana in Connecticut, which launched its medical marijuana program in 2012.

Last Saturday, Accettulo spoke outside the High Bazaar’s exhibition hall in an industrial park off Sherman Avenue in Hamden. Down the steep driveway, a TV crew was interviewing people leaving the bazaar.

Dozens of cars jammed the sides of the local streets, as a steady stream of adults arrived, walked up the driveway and paid a $20 admission fee. Veterans and medical patients were allowed in for free. Everyone entered through a side tent that led to the first dozen vendor tables, then through an open door into the main exhibition hall: A stark warehouse with two huge automatic doors and a tall stage where DJs were cranking Miles Davis in the hours before a live band took over.

Hearst Connecticut Media Group was invited inside, where in the main room, vendors sat and stood behind about 70 folding tables, displaying art work, T-shirts, candles, pipes and edibles. But the stars of the show were jars with dried flowers, some dramatically lighted to show off their colors and trichome crystals, which contain the flowers’ psychoactive cannabinoids.

Accettulo said each week, about 1,200 visitors go through the event, which outgrew its original location off Dixwell Avenue, in the weeks after a much smaller open-consumption party on July 1, when cannabis possession and use became legal, prompting Connecticut’s underground to step into daylight.

“This was never meant to be a secret. This is about you and me getting together on a Saturday,” Accettulo said. “This is like a church for people. They come here and they hear the music play. The vibe is very even-keel.”

He said the bazaar is the culmination of years of hard work and there are no plans to stop.

“This is the Jedi resistance,” he said, half-joking. “This is in no disrespect to anybody, but we come with no fear. Furthermore, it’s advocates wanting to take a little more control of bringing a fair and equitable cannabis experience to Connecticut,” he said. “We’re not just trying to trump a system, so to speak. We’re trying to help bring forth a more diverse, more beautiful craft cannabis market.”

Accettulo also leads mid-week meetings in which he and experts advise the cannabis community how to apply for the upcoming licenses for growing and distributing marijuana in the state’s nascent retail scheme with the first round of applications opening in early February.

State Rep. Josh Elliott, D-Hamden, one of the chief proponents of cannabis legalization since his election to the General Assembly in 2016, said he hadn’t checked out the High Bazaar in his town, but he is sympathetic.

“They take their craft seriously and they have an overall role in the marketplace,” Elliott said, worrying that many so-called microgrowers, with only four licenses to be given out in the first round this spring, will be shut out of the new retail industry. “I hope they’re recognized in the future.”

Generally, members of the High Bazaar are skeptical of Connecticut’s plan for retail sales, pointing to recent corporate takeovers of the medical cannabis growers.

“You can’t build a community from just handing out regulated licenses,” Accettulo said.

Christina Eva Capitan, 38, of Windsor, a bazaar vendor, agreed that bringing people together is the underlying goal.

“We like to spread education and feelings of hope in our community, connecting people with information and resources, and really just try to make a positive impact on the community, to help reverse some of that stigma and try to heal some of that pain the community has felt for so long,” she said outside the blue Hamden warehouse, guarded by armed security.

Capitan isn’t interested in pursuing a license in the upcoming cannabis retail market. “I believe that process has come about pretty unfairly and a little bit hastily,” she said. “As someone with a low income and as a mother, I don’t have the money to waste on it.”

She noted a conspicuous TV camera, with a reporter interviewing people leaving the event.

“There was some concern because there was news media here, so that makes me believe that people still feel stigmatized and still feel like they could potentially lose their job or have a PTA issue,” she said.

Inside, there was a party atmosphere, with people lighting up marijuana cigarettes and vendors chatting with members of the public, showing off their flowers and discussing cultivation techniques. At the end of some display tables were cardboard boxes with holes on top, labeled “donations.”

About 20 percent of the vendors are minorities, whom Accettulo says are given discounted rates for their tables, as part of the High Bazaar’s own efforts to support under-served communities that for decades were targets of the war on drugs that led to a disproportionate number of people of color in prison.

That disparity is one of the reasons that persuaded state lawmakers and Gov. Ned Lamont to approve recreational sales and to create a Social Equity Council to assure that some licenses will go to those under-served communities and that revenue from the recreational cannabis program will be reinvested there. In fact, Lamont campaigned on the issue of full legalization in 2018, but the General Assembly didn’t approve it until last year.

“The leadership of the High Bazaar has been really adamant about being inclusive, while also not speaking for people of color, but allowing us to create a space where we can speak among ourselves and then bring that thought to the table,” said another vendor, Luis Delgado, 61, of Hartford.

“So they are very welcoming of that,” said Delgado, whose corner table had a variety of flowers in little jars. “I also have some chocolates that are very medicinal, because they are very good for anxiety, for arthritis, muscle pain and things like that. The High Bazaar gives the cannabis community an opportunity to exhibit their craft and so people who are interested in that type of medicine often come and see what’s here, you know, what’s available. Everything is based on donations and many times people who come, donate because they know there is a lot of work that people put into their craft.”

A few nights earlier, in a crowded basement bar several miles south, off of Dixwell Avenue, the cannabis activists and vendors gathered for a social hour and tutorial on how to apply for a license in the imminent legal market being planned by the Department of Consumer Protection and the Social Equity Council.

Rafael Rosario, a communications manager for the Drug Policy Alliance, outlined the 70 initial licenses in nine categories that will be awarded, 30 of which will go to social equity applicants from impacted neighborhoods, with census tracts listed on the consumer protection’s website.

Fees for the social equity lottery range from $125 for delivery licenses, to $250 for retailers and packagers, to $375 for product manufacturers.

Rosario said that while the odds will be stacked against winning a license in the upcoming lotteries, if one person in the bar room wins, there will be plenty of jobs.

“It’s going to take a whole lot of us,” Rosario said.

“It’s all a game of chance,” added Accettulo, calling a cultivation, manufacturing or delivery license a “golden ticket” in the emerging Connecticut cannabis industry.

Accettulo and Cody Roberts, of the CT CannaWarriors, stressed the need to stay mellow during the weekend bazaars.

“First of all, there are no sales,” Roberts shouted out to the 100 or so people, the majority of whom were wearing face masks in the continuing pandemic, in the standing-room crowd in the Cellar on Treadwell. “This is a no-pressure community event. I know sometimes the energy can get crazy.”

A few days later, Accettulo stood outside the two-bay garage and remarked on the steady parade of visitors up and down the driveway and the hubbub inside the Hamden warehouse.

“This was all built post-July 1,” he said. “The roots are laid in the advocacy that brought the fair home-grow portion of the bill, and the equity portion. We understand the future of this as a private party and want to make sure people are elevating each other to the higher point, not just having to rely on the corporate megalords of the cannabis industry.”

This weekend, there were even more cars on Saturday parked along Sherman Avenue, including vehicles with New York, Maine and New Jersey license plates. A steady stream of people were heading in and out of the bazaar.

At the top of the driveway, outside the exit door, where cannabis smoke wafted out, Accettulo waved first-timers to the entrance as the bazaar appeared heading toward possibly its largest attendance yet.

“There’s great art in here,” Accettulo said. “Here at High Bazaar, we’re blending it in a way where you’re almost forced to see those peoples’ items as well. Mix it in with some good old cannabis, you know, and who doesn’t like cannabis on a Saturday? It’s the most-surreal thing ever. It’s nothing but a gathering of the community.”