Home CBD News At MJBizCon 2021, the Outlook for Cannabis is Rosy—and Not So Rosy – Green Entrepreneur

In a sign that the world is kind of returning to normal, MJBizCon 2021 has opened its doors back to actual people for the largest B2B cannabis industry event. 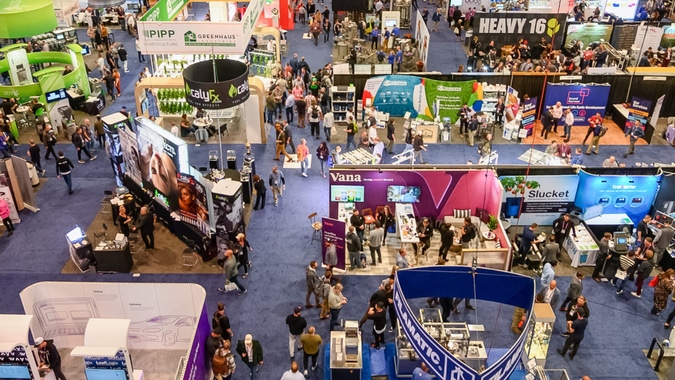 This is the time of year when tens of thousands of industry professionals descend on Las Vegas to show off their products and services, network, attend educational seminars, shake hands (or perhaps bump fists this year), smoke a few blunts, and make lots of deals.

MJBizCon, CEO and Founding Editor Chris Walsh, delivered his annual State of the Industry and Predictions for 2022 presentation to kick off the festivities. Walsh, who has been covering the industry for XX years, painted an optimistic picture of a growing and thriving industry that is becoming accepted by mainstream America.

But Walsh also pointed to some worrisome trends in the industry that need to be addressed. Here are some highlights.

Related: What’s in the future for Cannabis and Psychedelics? Industry Leaders Weigh In.

Cannabis is on track to be a $50 billion industry

Despite the pandemic and sluggish economy, cannabis continues to exceed sales expectations. Experts predict the industry will make $26.4 billion this year, and Walsh and other industry analysts predict that number will double by 2025 to $45.9 billion. For some perspective, that lofty figure would exceed both the annual revenues of Craft beer and the Global opioid market.

Other cannabinoids are gaining steam

While THC and CBD grab all the headlines, other cannabinoid compounds in the plant are being embraced by the industry, including CBC, CBG, THCV, and CBN. More controversial compounds include Delta-8 and HHC, which are not banned in many states despite having psychoactive properties.

As more people become familiar with the healing properties of these other compounds, they realize that cannabis is not a two-trick pony. This represents an opportunity for entrepreneurs to expand the plant’s reach and appeal.

For example, Walsh pointed out that the edibles market share of products with CBN is up 14.3 percent in California.

State legalization is full-steam ahead

While the federal government continues to lumber slowly towards national legalization, state legalization is in full swing. Marijuana is legal for adults in 18 states and Washington, D.C. Medical marijuana is legal in 37. More states have legalized since early November of 2020 than the previous three-plus years.

Walsh predicts that at least four states will legalize medical or recreational marijuana in 2022, including one “sleeper.” We have our eyes on you, Texas.

Like the rest of the economy, the pandemic slowed down investment in the cannabis industry. But some high-profile mergers and acquisitions this year have proved that investors are happily opening their wallets back up to cannabis companies.

M&As on the rise

As the economy returns to normal, so does the mergers and acquisitions activity. Just as before the pandemic, there has been increased consolidation in the cannabis industry as companies continue to be strategic about acquiring or investing in businesses.

Some notable M&A activity includes Truelieve and Harvest for $2.1 Billion and Jazz Pharmaceuticals and G.W. Pharma for $7.2 Billion.

MSO have also broadened their reach. Curaleaf operates in 23 states; Green Thumb Industries and Verana in 14, and Truelieve in 11.

But not everything is peachy for cannabis (despite the moniker of Justin Beiber’s new cannabis brand). Walsh highlighted several disturbing trends that continue to plague the industry.

In California, for example, the illicit market continues to thrive and cut into the profits of a highly regulated legal market.

Prohibitively high taxes and the 280e tax code, which forbids businesses from deducting any expenses from their gross income when it involves “trafficking” schedule I and II controlled substances (read: cannabis), have handicapped the industry and made the cost of doing business prohibitively expensive.

Moreover, the great promise of social equity has largely been a disappointment. Well-intentioned programs throughout the country are beset with issues. According to Leafly’s Jobs Report 2021, African Americans represent roughly 13 percent of the U.S. population, but only 1.2% to 1.7% of business owners in the industry.

Equally disturbing is that the percentage of minority executives in cannabis is actually decreasing. Walsh pointed out that in 2019, minorities made up 28 percent of the executive in cannabis. In 2021, minorities will make up 13.1 percent of executives. That’s .1 percent higher than the national average of 13 percent. So much for cannabis’s righting the wrongs of the War on Drugs.

But despite these negative trends, Walsh is mostly optimistic about the future. “Despite the lockdowns and the political, social, and economic unrest, the cannabis industry has prevailed – and been deemed essential,” he says.

Here are some of his predictions for 2022