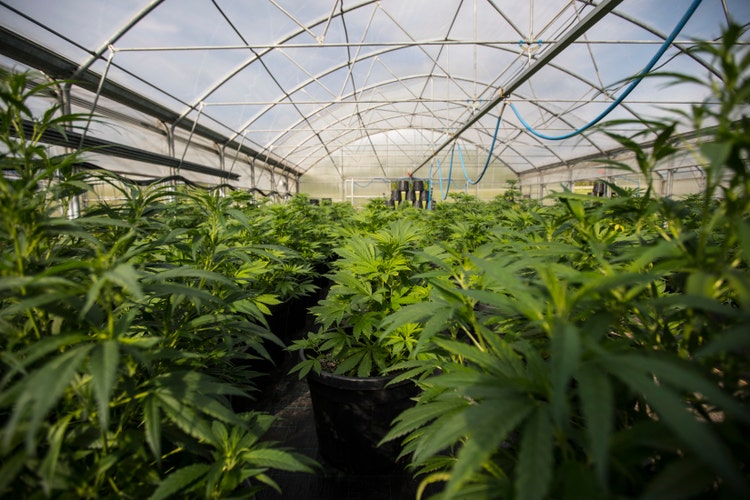 This is an abridged version of the full report published on Hoya Capital Income Builder Marketplace on March 20th.

Coming down from a seemingly never-ending ‘high’ since emerging onto the scene in the mid-2010s, Cannabis REITs have stumbled in early 2022, pressured by the broader growth-to-value rotation and uncertainty over progress on federal legalization. Within the Hoya Capital Cannabis REIT Index, we track the three cannabis equity REITs – Innovative Industrial (IIPR), Power REIT (PW), and NewLake Capital (OTCQX:NLCP) – along with the two cannabis mortgage REITs – AFC Gamma (AFCG) and Chicago Atlantic (REFI) – which together account for roughly $6.5 billion in market value.

Existing in a legal “grey area” in which federal, state, and local laws often contradict, cannabis has been federally restricted since the 1930s, but medical usage is now legal in 37 states while recreational usage is legal in 18 states following a burst of activity last year which saw five additional states legalize weed: New Jersey, New York, Virginia, New Mexico, and Connecticut. Just three U.S. states currently maintain a full prohibition of any cannabis-based product. More than two-thirds of the U.S. population now support marijuana legalization, up from roughly 15% in the 1970s and 35% in the early 2000s while roughly 1-in-8 Americans consume cannabis regularly.

Cannabis is a genus of flowing plants – one species of which is marijuana – which has psychoactive properties that have been consumed via smoking, vaporizing, within food products, or via extract for medical or recreational purposes since at least 2500 BC. The psychoactive components in marijuana – primarily THC – can produce a mild sense of euphoria, while other cannabinoids in the plant such as CBD have been shown in studies to be effective in medical use for treatments of cancer, AIDS, and other illnesses. The legal cannabis market is expected to more than double in size over the next five years, from roughly $16 billion in 2020 to nearly $41 billion in 2025, representing a compound annual growth rate of 21%.

The ongoing federal prohibition – and the resulting limit on access to traditional banking – has forced cultivators and retailers to turn to alternative sources for capital. These REITs effectively serve as “non-bank” lenders to state-licensed cannabis cultivators who often are shut out from access to traditional lending from federally-regulated banks. For equity REITs, assets are typically acquired through sale-leasebacks of cultivation, processing, and retail properties and lease are typically structured as triple-net leases (tenant pays all property expenses) with lease terms of 15-20 years. Leases are generally subject to parent company guarantees covering operations throughout the United States.

Mortgage REITs, on the other hand, typically originate 5-10 year loans collateralized by the underlying real estate, which stays on the balance sheet of the borrower. In either case, the capital provided by the REIT is typically then used by the operator to build-out a new facility or expand an existing cultivation facility, which are typically industrial-type facilities with specialized HVAC, lighting, and irrigation systems. A regulated cannabis operator must obtain proper licensing from the state for the facility which typically requires identification of specific real estate for license approval.

Despite the Democrat sweep of the 2020 Elections, the outlook for full Federal legalization remains murky, but there has been a renewed push in recent weeks to get legislation done before the 2022 midterms. The Hill reported today that the cannabis industry is in the process of an “in-person lobbying blitz” with more than 20 chief executives of top cannabis companies urging lawmakers to pass the SAFE Banking Act, which would enable legally operating cannabis firms to use banking services and credit cards. The report also notes that despite fairly bipartisan support for the SAFE Act, Senate Democrats have been slow to move on the legislation in efforts to pass a more all-encompassing reform package but, according to the report, these cannabis executives see as highly unlikely to garner the 60 votes required to pass.

In a report on the linkage of cannabis businesses with an underlying real estate asset within state legal frameworks, Hoban Law Group notes, “In many cases, state marijuana statutes and regulations are closely tied to real estate laws.” In Colorado, for example, the marijuana license is attached to the physical premises and stays with the property in the event of default. This ideal legal framework – which effectively puts the real estate asset at the center of the business – suggests that REITs would continue to be a primary capital provider even in the event of full federal legalization.

Reflecting the effects of this legal framework – along with the lack of available capital sources – demand for suitable cannabis real estate properties has outstripped the supply, particularly for large cultivation facilities that are housed in industrial facilities, a property sector that is already in short supply. Riding this supply/demand imbalance, cannabis REITs have been far and away the best-performing property sector since the start of 2017 with IIPR and PW delivering average annual total returns that are 7x and 5x higher than the Vanguard Real Estate ETF (VNQ) over the past 5-years.

As noted above, however, Cannabis REITs have stumbled in early 2022, pressured by the broader growth-to-value rotation and uncertainty over progress on federal legalization. The Hoya Capital Cannabis REIT Index – a market-cap-weighted average of the sector – has declined by nearly 18% this year compared to the 9.0% decline on the broad-based Equity REIT Index and the 6.9% decline on the S&P 500 ETF (SPY).

Both cannabis REITs have delivered significant outperformance compared with broad-based cannabis ETFs over most recent and long-term measurement periods, a trend that we expect to continue if state regulatory frameworks continue to evolve in the “landlord-friendly” structure discussed previously. Underscoring the underperformance of many of these cannabis ETFs, since its launch in late 2015, the ETFMG Alternative Harvest ETF (MJ) – the oldest and largest cannabis ETF – has produced average annual total returns -10.1%, woefully underperforming the S&P 500’s 14.9% annual returns during this time, and being “left in the dust” by the two cannabis REITs.

San Diego-based Innovative Industrial Properties was founded in 2016 with just a single property but has been on a continuous acquisition spree over the last five years, expanding its portfolio to include 105 properties spanning 19 states, all of which have legalized marijuana cultivation. Straddling the classification line between Industrial REIT and Net Lease REIT, IIPR was the first publicly traded REIT pursuing this cannabis-focused strategy. IIPR is now included in the S&P Small-Cap 600 Index and has a listed Preferred (IIPR.PA).

IIPR is the single-best performing REIT since the start of 2017 and focuses on the acquisition, ownership, and management of specialized properties leased to medical-use cannabis facilities. IIPR owns a national portfolio of over 7.7M square feet comprised of specialized industrial and greenhouse buildings and retail distribution facilities, 100% leased to state-licensed medical-use cannabis businesses. IIPR’s tenant roster includes state-licensed cultivators comprised of a diverse mix of established players and unproven “start-ups.”

Growing nearly as fast as its asset portfolio has been the share price, which has more than quadrupled since the start of 2017. IIPR has taken full advantage of the speculative investor demand for cannabis stocks, tapping the equity markets for additional “growth” capital every few months through a series of secondary equity offerings, expanding its share count by 20x over that time. Because of this valuation premium, IIPR has been able to acquire properties that are accretive to FFO, and while there have been questions about whether IIPR can continue to expand at the breakneck pace, the strong pace of activity in 2022 in which IIPR expanded its portfolio count by more than 50% – most of which were sourced through existing tenant relationships – puts to rest many of our near-term concerns about slowing growth.

New York-based Power REIT has a more complex operating history, emerging in its current form in 2011 as the successor company to Pittsburgh & West Virginia Railroad. Until it began a strategy shift in 2018 towards a focus on cannabis real estate, the firm was focused on the ownership, development, and management of transportation and energy infrastructure-related real-estate. Power REIT is currently diversified into 3 industries: Controlled Environment Agriculture (greenhouses), Solar Farm Land, and Transportation. Power REIT announced in 2019 that it intends to focus primarily on expanding its real estate portfolio of Controlled Environment Agriculture greenhouse. Power REIT owns 21 CEA properties in Colorado, Maine, and Oklahoma, comprised of 1,100,000 square feet of greenhouse and processing space.

Florida-based AFC Gamma is one of the three newer publicly-listed cannabis REIT following its $115m IPO last March. Prior to its public listing on the Nasdaq, AFC Gamma operated as a non-traded REIT under the name Advanced Flower Capital and is led by Leonard Tannenbaum, who previously founded the asset management firm Fifth Street Finance. Unlike IIPR and PW which are both equity REITs, AFCG operates as an externally-managed mortgage REIT, originating and managing real estate-backed loans for cannabis companies.

AFCG’s portfolio is comprised of loans to eleven different borrowers across 49 individual properties, totaling approximately $430 million in total principal amount. Its loan portfolio has an average cash interest rate of 11.7% and its loans typically have up to a five-year maturity, secured by a lien on the real estate. AFC noted in its IPO filing that “due to the capital-constrained cannabis market which does not typically have access to traditional bank financing, we believe we are well-positioned to become a prudent financing source to established cannabis industry operators.”

Connecticut-based NewLake Capital Partners began trading on the OTC Market last August following a $102M public offering. NLCP is an internally managed triple-net lease equity REIT that purchases properties leased to state-licensed U.S. cannabis operators. Despite its “OTC-status,” NLCP is the second-largest cannabis REIT by market capitalization and on its Q4 earnings call, the company noted that it is exploring an exchange listing on the NASDAQ. NewLake currently owns a geographically diversified portfolio of 29 properties across 11 states with 8 tenants, comprised of 17 dispensaries and 12 cultivation facilities, sharing many of the same tenants as IIPR including Curaleaf, Cresco Labs, Trulieve and Columbia Care. As of early 2022, these properties were 100% leased and primarily located in limited-license jurisdictions and NLCP has collected 100% of rents since inception.

Joining these four REITs, a pair of newcomers entered the “pot party” late last year – Chicago Atlantic Real Estate Finance (REFI) – which is slated to report its first public earnings result this week. According to its registration statement, REFI booked $5 million in revenue for the 12 months ended September 30, 2021. Elsewhere, Freehold Properties (FHP) filed for an IPO late last year to raises up to $115m, but has yet to set terms. Freehold Properties – based in Tennessee – booked $4 million in revenue over the past year and plans to list on Nasdaq under the symbol “FHP.”

Buoyed by the two higher-yielding mortgage REITs and by another wave of dividend hikes this year, cannabis REITs pay an average dividend of 4.1%, which is well above the REIT market-cap-weighted average of 2.8%. Cannabis REITs have delivered the strongest dividend growth over the past five years, averaging more than 40% per year. Cannabis REITs pay out roughly 65% of their available FFO, slightly higher than the REIT sector average.

Thriving in the murky and often contradictory regulatory framework of legalized marijuana, recent legislative movement on cannabis-related bills has raised questions about the future prospects in a federally-legalized environment. Importantly, even with full federal legalization, we don’t believe that this would fundamentally change the industry dynamics, as this process simply shifts the regulation onto the states, many of which have adopted frameworks that are quite favorable to property owners with licenses that are “attached” to real estate – and limited in quantity. While still early in the evolution of the industry, we continue to see emerging parallels with the casino industry where REITs have carved out a profitable and attractive niche with a sustainable competitive advantage.