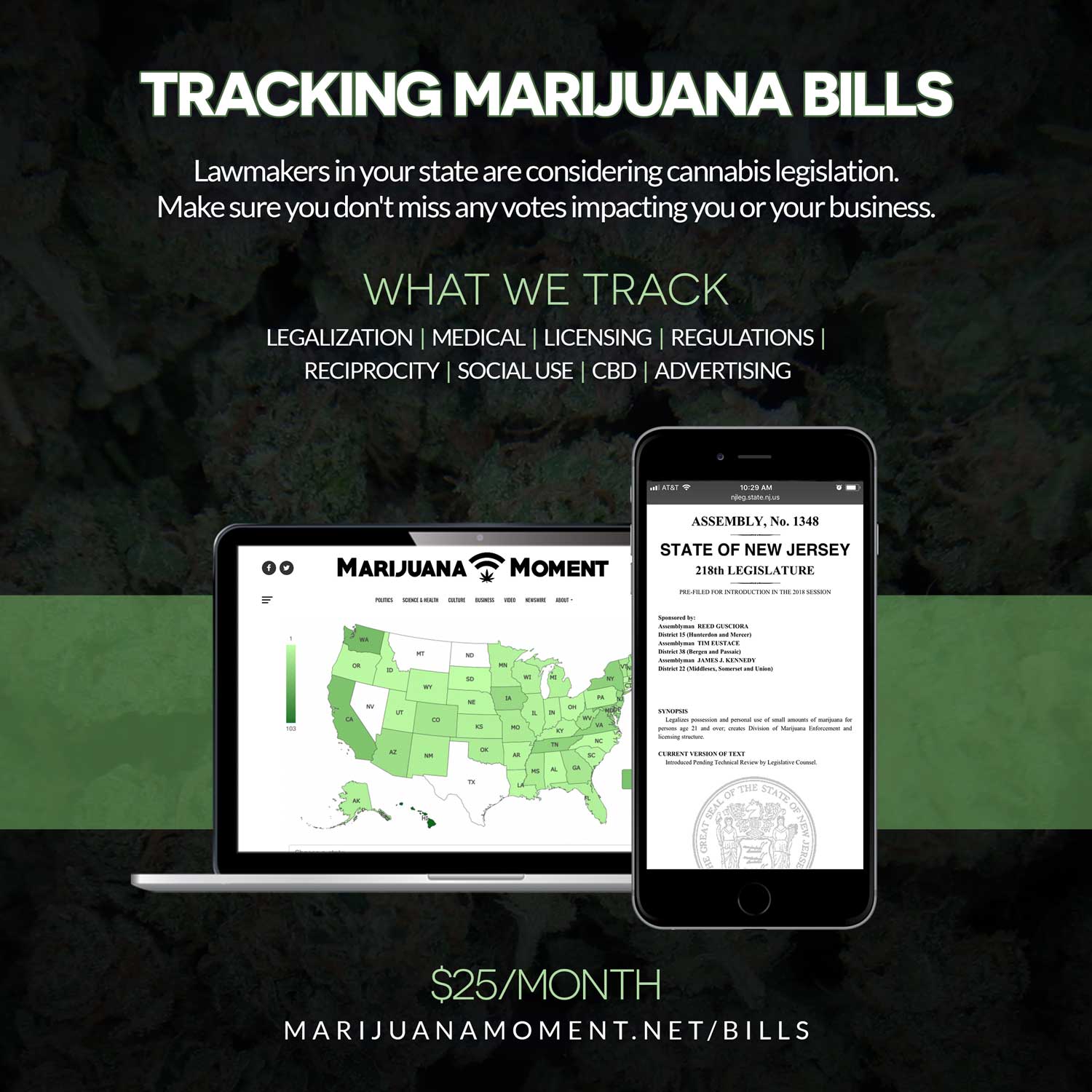 At a press conference on Wednesday to build support for his plan to legalize marijuana in Connecticut, Gov. Ned Lamont (D) and other backers described the proposal as a thoughtful, data-driven measure designed to address decades of disproportionate harm to the state’s Black and brown residents. While the bill is set for its first committee hearing on Friday, some social justice advocates have deep concerns about how the legal market would be structured.

“This has been a long time coming,” the governor said of his proposal. “We’ve been talking about this for ages, and I think now is the time to legalize adult-use recreational marijuana in a carefully regulated way with an emphasis upon equity and justice. Now is the time.”

Lamont, who began circulating a draft of the legalization bill last month, described the state’s enforcement of current laws against cannabis as “erratic with prejudice” and “fundamentally unfair” to people of color.

“I’m proud of what we’ve done in terms of justice and in terms of erasure of those convictions,” the governor said of the bill, SB 888. “We can do this in a safe way…that redresses some of the wrongs of the past and gives folks who have been hardest hit an opportunity to get back on their feet.”

Lamont introduced the legalization proposal as part of his budget plan earlier this month, after calling for the policy change earlier this year during his State of the State address.

“This is a comprehensive bill but it has three main and very logical components: decriminalization, regulation and revenue generation,” Rep. Michael D’Agostino (D), chair of the House General Laws Committee and a lead coordinator on the governor’s legalization proposal, said at Wednesday’s event. “One animating principle and theme that’s embedded through all of those components is equity.”

Among equity advocates, however, not everyone is impressed. Jason Ortiz, who served as chair of a cannabis licensing working group convened by the governor late last year, described the press event as “a disgusting display of naked greed,” adding that “SB 888 must be stopped if we are ever going to have a serious conversation on equity.”

“I am deeply disappointed and quite frankly insulted that the work of the equity discussion group would be used to support a bill that denies our community economic opportunities that they are handing over to the rich white men who control the Connecticut medical industry,” Ortiz, who is also the political director for advocacy group CT United for Reform and Equity, told Marijuana Moment in an email. “This is corruption plain and simple, and they are exploiting the suffering of my community in order to line their pockets.”

Under SB 888, Connecticut’s existing medical marijuana businesses would be able to begin selling to adults before the rest of the legal market is up and running, a head-start intended to begin legal sales as soon as possible. Critics warn the approach would create obstacles to smaller operators trying to enter the newly legal market.

The details of how communities most impacted by the war on drugs could gain from the legal industry would be mostly determined after officials receive a report from a new equity commission, and advocates are worried that big businesses may have cornered the market by then.

The Judiciary Committee scheduled a hearing on Gov. Lamont’s legalization bill on Friday. We will be imploring the committee to advance the bill, but to first make revisions to make it stronger and more explicit on equity. Witnesses can sign up here: https://t.co/tZ9ZopqlWk

Rather than give people impacted by the war on drugs priority in licensing, as some other states have attempted to do, Connecticut’s initial plan would use a portion of cannabis tax revenue to fund local governments and programs in so-called impact zones, geographic areas that have seen disproportionate arrests and convictions under the war on drugs.

“What we heard in conversations with regulators in other states, and in talking to folks in these communities, is that this social equity plan needs to be broad-based and focus not merely on who gets these businesses and licenses at the end of the day, but what our community impact is,” Arunan Arulampalam, deputy commissioner of the Department of Consumer Regulation, said at Wednesday’s press conference.

“We’re going to use the revenues from this to get back into the community, get back to municipalities, hold down property taxes and help some of the communities that have been hardest hit get back on their feet” added Lamont. “I think that’s an important piece of the equity justice that we mean to do.”

“I think now is the time for legalized adult-use recreational marijuana in a carefully regulated way with an emphasis on equity and justice.” https://t.co/1xYyEaV6g6

In a Facebook post after Wednesday’s event, Ortiz called attention to recommendations he made as chair of the governor’s marijuana licensing task force that didn’t make it into the bill, including proposals to establish a capital fund to provide zero-interest loans to equity applicants and a provision to require equity applicants to control at least half of all licenses before any legal sales could begin.

“Ask the governor and everyone of the rich white men stumping for his bill to point to the specific line in SB888 where these recommendations were implemented,” he wrote. “The bill literally says only a handful of rich white men get to sell cannabis, but the office of the governor is going to claim equity advocates like myself are the BARRIER to community investment?”

In a separate post, Ortiz drew attention to a competing marijuana bill, HB 6377, which includes additional equity measures, including priority application and funding for low-interest loans among equity applicants. “The difference between these two approaches to politics and governance,” he wrote, “could not be more stark.”

HB 6377 was introduced on February 2, more than a week before SB 888, and referred to the Joint Committee on Labor and Public Employees. The panel held a February 9 public hearing but has not yet voted on the measure.

Lamont’s bill will be heard on Friday by the legislature’s Joint Judiciary Committee.

—
Marijuana Moment is already tracking more than 700 cannabis, psychedelics and drug policy bills in state legislatures and Congress this year. Patreon supporters pledging at least $25/month get access to our interactive maps, charts and hearing calendar so they don’t miss any developments.

Mike Taylor, a professor of criminal justice at the University of New Haven, said Wednesday that more than 7,500 people were arrested and charged in Connecticut with some form of marijuana possession in 2020. “That’s a number equal to about 10 percent of the business of our criminal courts,” Taylor said.

A reporter for Hartford-based CBS TV affiliate WFSB asked Seagull whether the bill would allow advertising on billboards along interstates, noting that some businesses have already put up billboards in Connecticut inviting residents to buy marijuana across the border in Massachusetts.

“The restrictions here would apply just to the Connecticut businesses that we’re licensing. That’s sort of the universe we can control,” Seagull replied. “We can’t regulate what those [Massachusetts] businesses are putting up in Connecticut to attract people.”

Lamont interjected, saying he didn’t think cannabis companies from either state should be advertising their businesses on billboards.

“Let me talk to Gov. Charlie Baker about that,” he said, referring to his Massachusetts counterpart, “because that makes no sense that he can advertise in Connecticut and our guys can’t. I don’t think either should be doing billboard advertising. I think it’s the wrong way to go, and I’ll make that case.”

ICYMI: Watch today’s discussion on Governor Lamont’s proposal to responsibly and equitably legalize and regulate the adult use of marijuana in Connecticut.

Despite disagreement over the details of the policy proposal, many expect legalization to happen Connecticut’s near future. House Speaker Matt Ritter (D) said in November that legalization in the state is “inevitable.” He added later that month that “I think it’s got a 50–50 chance of passing [in 2021], and I think you should have a vote regardless.”

Should this year’s effort fail, Ritter said he will move to put a constitutional question on the state’s 2022 ballot that would leave the matter to voters. A poll released last year found that nearly two-thirds of voters (63.4 percent) either “strongly” or “somewhat” supported recreational legalization.