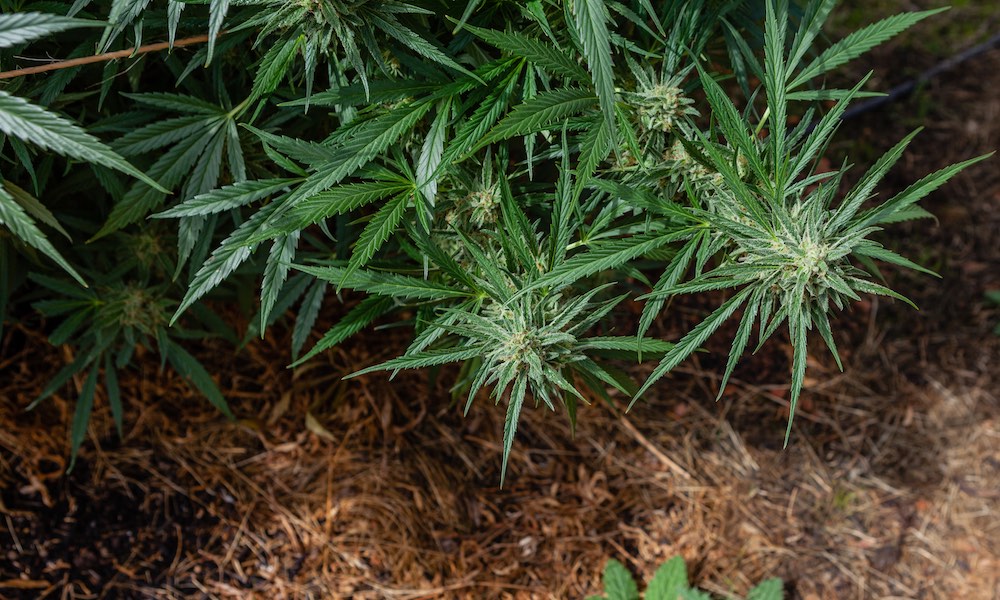 Local authorities across Oregon’s southern counties have this year reported a proliferation of unlicensed cannabis grow operations—with much sensationalism about involvement by criminal cartels. But the death of a man dropped off at a Chevron station in Cave Junction in early August brought the claims into grim focus.

This bleak discovery prompted the Josephine County Sheriff’s Office to investigate a massive outlaw grow in the Illinois Valley that they said showed evidence of human trafficking and involuntary servitude.

Sheriff Dave Daniel told local KDRV that a Hispanic man was dropped off at the gas station, “very near death,” and that he expired on his way to a local hospital. The cause of death had not yet been determined.

In the resultant Aug. 17 pre-dawn raid, troops from more than a dozen state and federal agencies, including Homeland Security and the FBI, backed up the Josephine Marijuana Enforcement Team. The target was the Q-Bar-X Ranch near the town of Kerby, where agents found some 200,000 marijuana plants in more than 400 “hoop-houses” spread across the 1,300-acre property. Some 6,000 pounds of processed cannabis and $140,000 in cash were also reported as confiscated.

Sheriff Daniel said that about 130 workers were detained for “questioning,” at the properties, and stressed the squalid working and living conditions at the site. “At this point the workers are being treated as victims,” he told KDRV.

The man whose mysterious death supposedly sparked the raid did not actually work at Q-Bar-X Ranch, authorities admitted. He is believed to have worked at a farm in Cave Junction, Jefferson Public Radio reports. But within two days of his death, the Cave Junction farm had been harvested, and the workers apparently moved to the ranch in Kerby.

Sheriff Daniel said suspicions of human trafficking followed multiple 911 hang-up calls that came from the property, as well as a source who is remaining anonymous for security reasons. Daniel said that he sees the modus operandi of a criminal cartel at work here.

“We’ve heard of the threat of harm to your family if you don’t go with us,” Daniel told Jefferson Public Radio. “And then they are transported up to the location. From what we are understanding, these workers are not paid until the end of the year when the shipment goes out and the money is brought in. There’s not like a weekly payroll going on here.”

Similar claims are now raised by authorities in Jackson County, bordering Josephine on the west—both in the Klamath Mountains along the California border.

“We’re asking the state to help us with this issue, which is a state-regulated industry,” Dyer said. “Help with law enforcement officials, we’re looking for help with code enforcement, help with the water master.” The Jackson County Watermaster’s Office coordinates with the Oregon Water Resources Department to manage the local watershed, that of the Rogue River.

A similar letter to Gov. Brown by state lawmakers from the area made accusations of “severe aggravation of the drought through massive and systematic water theft, long-term damage to agricultural lands from various polluting practices, and the financial ruin of licensed growers whose compliance obligations make competition impossible… All this is taking place across the Rogue Valley with essential impunity.”

An account in the Southern Oregon Mail Tribune described conditions reported by police at recently raided grow sites: “Workers are sleeping in tents or on shipping container floors, sometimes with nothing but pieces of cardboard for mattresses. They lack running water for drinking, showering, cleaning their clothes or using the toilet. They’re exposed to pesticides, store their personal belongings in trash bags and live near dozens of fire-prone outlets strung up on plywood, according to photos from drug busts in the Rogue Valley this summer.”

In early September, authorities made direct claims of Mexican cartel involvement in an illicit cannabis grow in Deschutes County. This is north and inland from the Klamath, on the east side of the Cascade Range.

A county drug enforcement team raided a 30-acre grow operation in the town of Alfalfa, seizing 9,227 plants and 2,800 pounds of processed bud. Authorities called it the biggest drug bust in the county’s history. Two pistols and an AR-15 rifle were also confiscated. Officers detained and released about 21 people, who they said were mostly Mexicans illegally trafficked into the United States to work in the illicit cannabis trade.

“We did not arrest any of the migrant workers,” Sgt. Kemp Vander Kamp of the Sheriff’s Office told The Oregonian. “Most of them were there to pay off debt for being smuggled into the country.”

The workers were reportedly found living in wooden shacks and dome tents with limited clean water sources.  “We didn’t know we would be walking into a humanitarian aid situation,” Vander Kamp said.

Federal Prohibition Part of the Problem?

Oregon is among the states where a big illicit sector persists despite cannabis legalization, which was approved by Beaver State voters in 2014. While conservatives point to this as a failure of legalization, Oregon’s cannabis advocates point out that the legal sector is still reined in by federal prohibition: illicit operations often produce for out-of-state markets, while licit crops are prohibited from crossing state lines—resulting in a glutted adult-use market.

Advocates have been pressing for a legal interstate market to relieve the economic pressure on the licensed industry and make it more competitive with what appears to be an increasingly sleazy and oppressive outlaw sector.