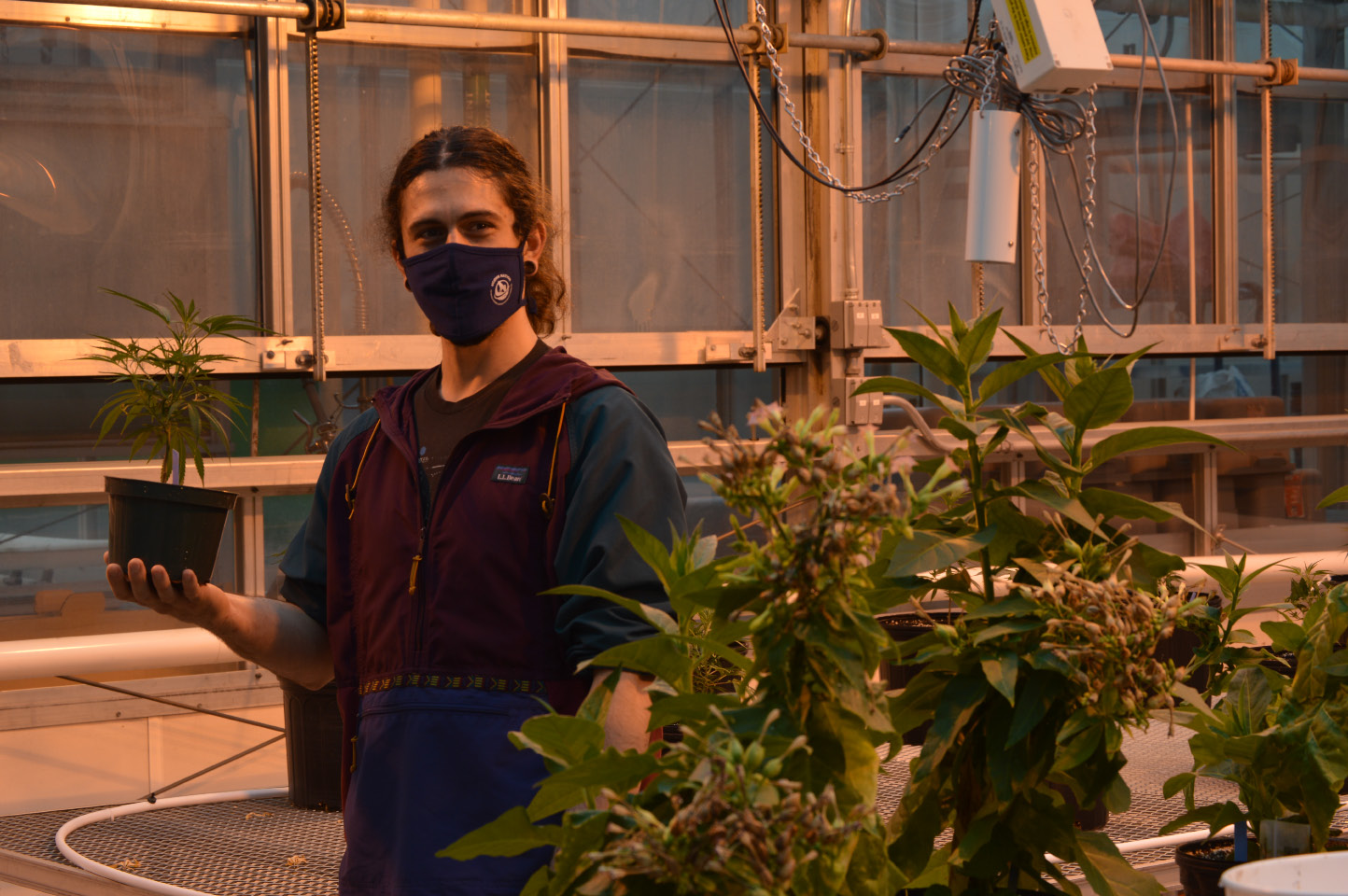 In 2017 UConn horticulture professor Gerald Berkowitz and a group of 40 students toured the facilities of Curaleaf, one of Connecticut’s four medical marijuana producers, and picked up an interesting tidbit.

“The CEO of the company was saying that he could never find any [job applicants] that had any knowledge of cannabis horticulture,” Berkowitz said. “In fact, there were no programs or anything in the country to address that.”

About two years later, Berkowitz established UConn’s first cannabis horticulture course through the university’s School of Agriculture and Natural Resources. The course was immediately popular with students, some of whom have parlayed that education into internships and jobs with cannabis companies.

As acceptance and legalization of marijuana grows, so has demand for trained professionals in the cannabis industry for positions including growing, extracting and testing plants. Marijuana industry companies have been increasingly recruiting cannabis students at Connecticut colleges, including UConn and Quinebaug Valley Community College in Danielson and Willimantic, prompting both schools to expand their course offerings, officials said.

The timing comes as more states legalize the drug for medical and recreational uses, and lawmakers in Connecticut, which already has a successful medical marijuana program, weigh legalizing the drug for all adults.

“Trying to develop [courses or programs] to make students industry-ready is my main focus,” said UConn professor Matthew DeBacco, the primary instructor for the school’s introduction to cannabis course. “I know we’ve got a pretty good rate of getting students jobs and internships.”

The U.S. cannabis industry has been hiring. As of this year, there were 321,000 full-time cannabis jobs in the U.S., according to an annual report by Leafly, a Seattle-based cannabis information resource and technology company. That’s 77,000 more jobs than 2020, according to Leafly.

Students who take DeBacco’s “Introduction to the Horticulture of Cannabis” course learn the fundamentals of the cannabis plant’s grow cycle, optimization of cannabinoid content and post-harvest handling, among other aspects of growing the drug. Starting this summer, DeBacco will start teaching an advanced course as well, which will focus on things directly applicable to employment in the cannabis industry, like how to extract cannabinoids from cannabis plants and common challenges in commercial cannabis production.

Berkowitz said adding the advanced class is a step toward developing the non-degree cannabis courses into an official certificate program or minor. He thinks the university could easily establish a formal cannabis studies program that covers multiple disciplines in the industry, and that such a program would be popular.

UConn has only offered the intro course and independent studies so far, and that class remains in high demand. Many students who took the course scored internships and jobs in the industry related to distilling and testing THC and CBD levels in cannabis plants.

“Dozens [of students] in the last couple of years have done internships,” Berkowitz said, noting that about half of those interned in Connecticut and half in Massachusetts. “They’re walking onto jobs, and they’re walking into jobs with really good salaries.”

Last summer UConn graduate student Lauren Sands interned for High Purity Natural Products, a CBD manufacturer in Southbridge, Mass. The company, which has hired at least one other person who took the UConn course, wanted Sands to stay on when the summer ended.

Samuel Haiden, 30, of Portland, Maine, worked in the cannabis industry as a legal caregiver and consultant for cannabis companies for years before he came to UConn to study under Berkowitz, he said. While he already knew a lot of the course content before taking the intro class, Haiden said a stamp of approval from an institution like UConn has become a big leg-up in the cannabis industry.

“I think companies got really tired of dealing with people who aren’t vetted,” Haiden said. “Having fundamental scientific knowledge about horticulture and plant physiology prepares me better for cultivation as well.”

“We joke that it’s a gateway program,” Kaufman chuckled. “We know there are people interested in cannabis — an emerging industry — and some prospective students haven’t found what they’re interested in. … We thought it could interest them in coming to college.”

At least one Connecticut cannabis company is interested in hiring out of that program. Nick Bard Stein, part owner of CBD and cannabis accessory store Green Valley Glass, said he’s currently interviewing people who completed the Quinebaug program for retail jobs at the company’s Colchester and Putnam stores.

“We’d really like to recruit out of that program,” Stein said. “They’re equipped with fundamental knowledge of cannabis.”