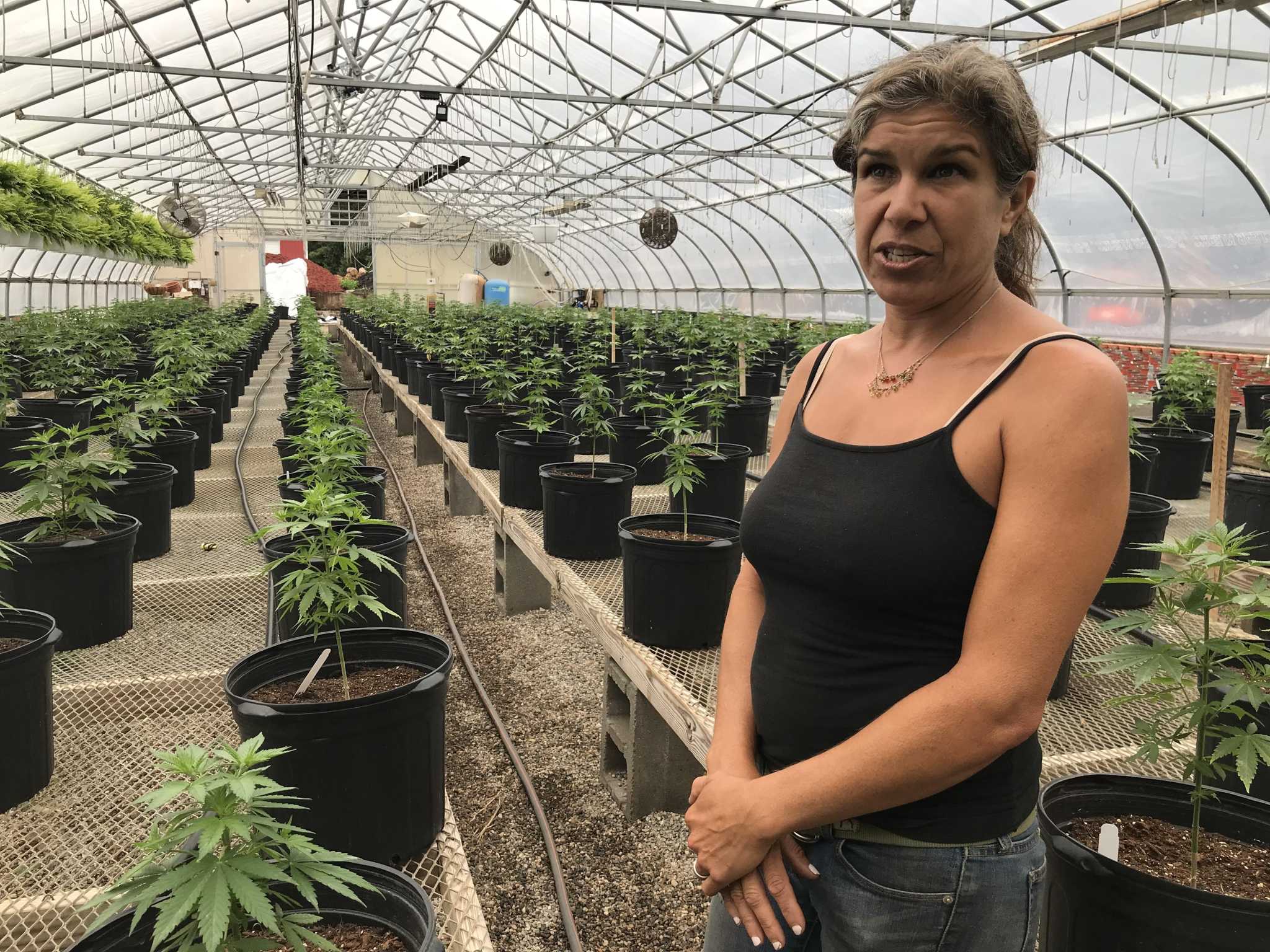 Becky Goetsch grows marijuana. She has about 800 plants spread out in a pair of greenhouses. She’s hoping to grow more.

Inside the Killingworth garden store owned by Goetsch and her partner are huge plastic bins filled with dried cannabis buds ready to be rolled into joints and smoked.

“I think Connecticut grows some of the best hemp in the country,” Goetsch said. When asked what makes good hemp, a marijuana plant with little to no THC, she replied, “good soil, good people, good farmers. Our Connecticut River Valley is so fertile. There’s some really, really good hemp being produced.”

The problem, though, is “can you sell it?”

“The sticker price for CBD is still really high to the customer,” she said. “That doesn’t translate to the income that I’m generating from growing.”

When Goetsch got started, after the federal government allowed the growth and sale of CBD-heavy marijuana in 2018, farmers like her could sell marijuana plants for about $40 a pound. Nowadays, it’s more like $7.

“When you’re selling in bulk to an extraction facility for CBD extraction, that’s where you get the least amount of money,” she said.

Instead, Goetsch is marketing herself and her company, Running Brook Hemp Co., as craft cannabis, selling pre-rolled CBD-heavy joints, tins of CBD tea coupled with valerian root as a sleep aid, and other marijuana products intended for discerning customers.

“I’d like to be more like a Sally’s pizza kind of person, than a Domino’s,” she said.

Now that Connecticut has legalized the recreational use of THC-heavy marijuana, Goetsch is applying to be a micro-cultivator, replicating her success with CBD.

Goetsch is a farmer. Even though she’s been growing marijuana for years, she understands that plants need time. Her current CBD crop is doing well, but the state has said the first recreational dispensaries, selling THC-heavy cannabis, should open by July 2022, and that’s not a lot of time from a farmer’s perspective.

“If they want dispensaries open July 2022, we’ve got to get growing it,” she said.

Goetsch is, perhaps, an odd person to be growing marijuana. Though she describes herself as a hippy, Goetsch has a doctoral degree in microbiology from Yale University, specifically in molecular, cellular and developmental biology.

She’s also in recovery. She said her shift from laboratory to farm has been a big part of that recovery.

“When I started growing it I actually was able to get off all of my pharmaceutical meds trouble,” she said. “When you go through something, and then you’re on antidepressants, and your life gets better, do you go off the antidepressants? You don’t know what to do. It’s like, what’s keeping you sane? That’s where CBD came into my life, was to aid in my recovery.”

Goetsch, originally from Branford, does not see a contradiction in being in recovery and growing recreational marijuana. Quite the opposite.

“I think that cannabis in general, be it CBD or THC, has so many benefits for the recovery community at large,” she said. “Hopefully, I can help craft products that can be beneficial to the community.”

Goetsch doesn’t just grow marijuana. She has fields of lavender, valerian, basil, turmeric and other medicinal herbs. All the plants are grown organically, without the use of pesticides.

As she walked past rows of plants, she bent down to remove bugs from the tops of the leaves and eggs from the underside. There is no organic certification for cannabis products but she’s proud that her marijuana is farm-to-table.

Her own teenagers have access to black market cannabis products, like vape cartridges, which she said are “just super toxic and harmful.”

“I don’t even know where they come from,” she said. “That’s what they have access to as teenagers and they have free access to it. It’s all over. It’s easier for them to buy than alcohol.”

‘A seat at the table’

Goetsch is applying to be one of Connecticut’s micro-cultivators, allowing her to grow 2,000 to 10,000 square feet of marijuana, which she said “fits into my model perfectly.”

She’ll pay $250 to enter a lottery, another $500 for a provisional license if she’s selected and then $1,000 once her final license is granted. But there are no guarantees.

The law, as it was drafted by lawmakers and signed by Gov. Ned Lamont, stipulates a parallel process for so-called “social equity” applicants, producers and retailers in communities that have been disproportionately impacted by the war on drugs.

“I don’t begrudge the fact that the focus was really on trying to correct the wrongs that have been done to these groups,” Goetsch said.

But Goetsch sees herself as a part of two disadvantaged groups. She’s both a woman and a farmer.

“One of our strategies is to try to get a voice about being a female-owned business,” she said. “New York state actually has language in their bill protecting farmers as a disadvantaged population. How many farmers do you know who are sporting a new boat and a Mercedes? So farmer, and then female farmer, hopefully, because women didn’t really have a seat at the table at all in these negotiations.”

During the negotiations that led to legalization, Lamont had been criticized by some advocates for favoring the state’s existing medical marijuana dispensaries at the expense of smaller growers.

“What I hope is that these initial licenses are balanced, as well, because I do think that there’s a lot of talent and a lot of people in my same situation,” she said. “There’s a lot of talent in the hemp community that can help achieve the governor’s revenue goals. We’re all set. It’s planting a different seed.”

In addition to the possession, sale and use of marijuana, the bill allows residents to grow their own cannabis. Recreational users will be allowed to grow three immature and three mature plants as of October 2023.

But Goetsch thinks many of those home growers will be “disappointed.”

“I think people are going to be disappointed getting their seeds started if they don’t have the right setup,” she said, but it’s not just growing it that can be a problem.

“At the harvesting and drawing stage, you can have a beautiful crop and everything can go perfectly, and you have this plant that’s absolutely stunning, and you’ve got these big, beautiful buds on it and it can all just fall apart on you during the drying and curing stage,” she said.

There’s a fungus called bud rot, along with spider mites and powdery mildew, “all sorts of challenges,” Goetsch said, though that’s something she’s planning to help with.

“I’m also hoping that we’ll be able to supply people who want to grow with good genetics and good seeds and good starter plants,” she said. “If we do get a cultivators license — hopefully we can — we can help the medical patient or the recreational grower be successful.”

Those regulations haven’t been written yet, but Goetsch does hope to sell directly to the consumer, just as she does with CBD.

“My interpretation of the law is, a micro-cultivator can sell to dispensaries and delivery services,” she said. “I have no idea how it’s gonna all slice out. But in my head, I could theoretically partner with a delivery service and sell directly to consumers that way.”

Regardless how the regulations are written, Goetsch’s focus will be the same: Craft cannabis with an emphasis on organic growth for medicinal purposes, not marijuana that gets people stoned. Her hope is to grow plants with a one-to-one CBD and THC ratio.

“My goal would be to try to source genetics that are balanced strains,” she said. “I won’t be growing high THC marijuana.”