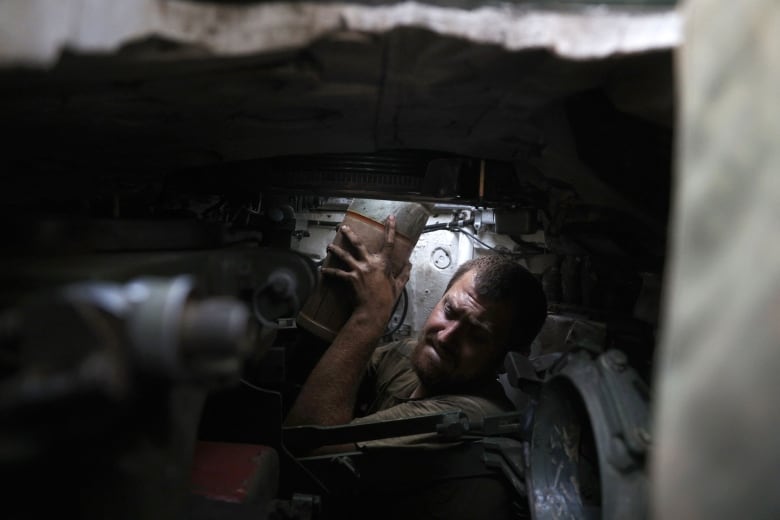 Russia reported new Ukrainian drone strikes on Friday evening, a day after explosions erupted near military bases in Russian-controlled areas of Ukraine and Russia itself, apparent signs of Kyiv’s growing ability to strike assets from Moscow away from the front lines.

The latest attacks followed large explosions last week at an airbase in Russian-annexed Crimea. In a new assessment, a Western official said those explosions had rendered half of Russia’s Black Sea naval aviation force useless in one strike.

Russian news agencies RIA and Tass, citing a local official in Crimea, said Russian anti-aircraft forces appeared to have been in action near the western Crimean port of Yevpatoriya on Friday night. Video posted by a Russian website showed what appeared to be a surface-to-air missile hitting a target. Reuters could not immediately confirm the authenticity of the video.

Tass quoted a local official as saying that Russian anti-aircraft forces shot down six Ukrainian drones sent to attack the town of Nova Kakhovka, east of the city of Kherson. Ukraine says returning to Kherson is one of its top priorities.

Further south, a Crimean official said defense forces there had shot down an unspecified number of drones over Sevastopol, Crimea’s largest city.

A Ukrainian tank soldier moves an ammunition shell this Friday at the front in the Donetsk region. (Anatolii Stepanov/AFP/Getty Images)

The night before, multiple explosions were reported in Crimea, which Moscow captured and annexed in 2014, including near Sevastopol, where Russia’s Black Sea Fleet is based, as well as in Kertch, near a huge bridge to Russia.

Inside Russia, two villages were evacuated after explosions at an ammunition dump in Belgorod province, more than 100 kilometers from territory controlled by Ukrainian forces.

At least five people were killed and 10 others injured in Russian shelling of towns and villages in eastern Ukraine’s Donetsk region, regional authorities said. Russian shelling of the city of Kharkiv also killed at least one civilian early Friday. Russian missiles again hit port facilities and a university building in the southern port city of Mykolaiv.

Kyiv’s military actions are being noticed

Kyiv has kept official comment on incidents in Crimea or inside Russia while suggesting it is behind them with long-range weapons or sabotage.

A Western official indicated on Friday that at least some of the incidents were Ukrainian attacks, saying Kyiv was consistently achieving “kinetic effects” behind Russian lines.

Huge explosions on Aug. 9 at the Rair base on the Crimean coast had put more than half of the Black Sea Fleet’s fighter jets out of commission, the official said, in what would be one of the blips Saky of Atussia most expensive of the war. 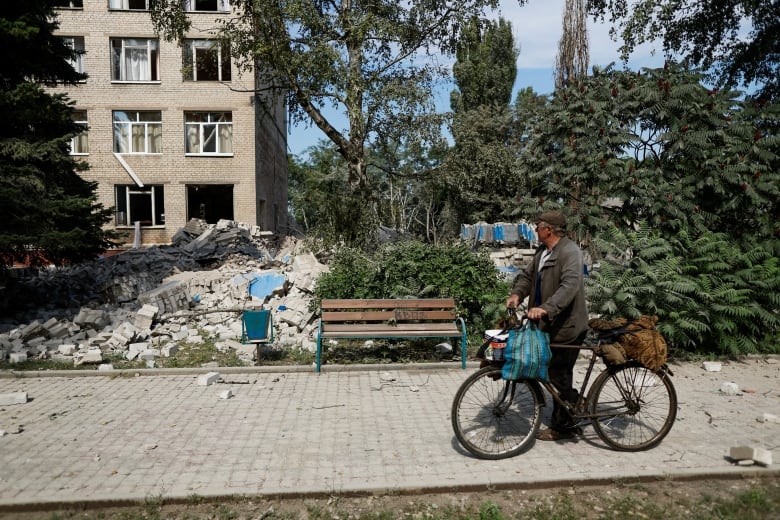 A Ukrainian examines the damage a missile attack caused to an engineering university building in Kramatorsk, Ukraine, on Friday. (Ammar Awad/Reuters)

Russia has denied the planes were damaged in what it called an accident, although satellite images showed at least eight completely burned warplanes and several huge impact craters. Earlier this week, Moscow fired the head of the Black Sea Fleet.

Ukraine hopes its apparent newfound ability to strike Russian targets behind the front lines could turn the tide of the conflict, disrupting the supply lines Moscow needs to support its occupation.

Since last month, Ukraine has launched advanced Western-supplied rockets to strike behind Russian lines. Some explosions reported in Crimea and Belgorod are beyond the range of munitions Western countries have acknowledged sending so far.

A senior Ukrainian official said that about half of the incidents in Crimea were Ukrainian attacks of some kind and half were accidents caused by Russia’s bad operations. He stressed that the attacks were carried out by saboteurs rather than long-range weapons, although he did not say whether Kyiv now had ATACMS, a longer-range version of the US HIMARS rockets it began using in June . 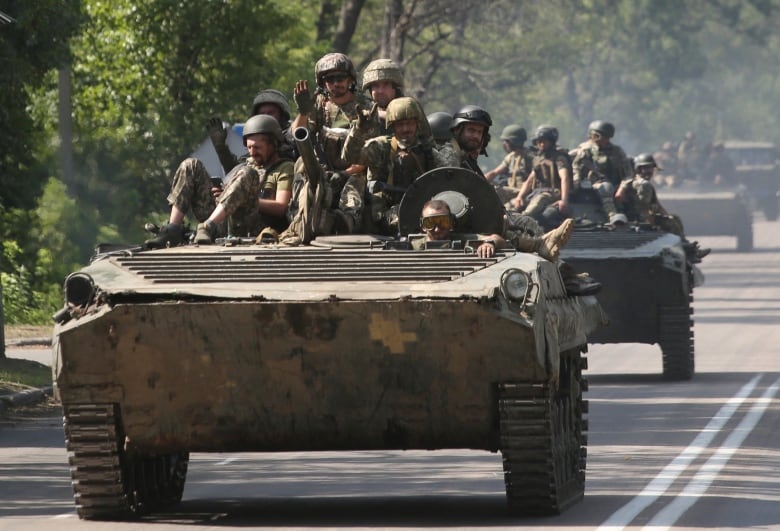 Ukrainian soldiers are seen riding in vehicles on a road in the Donetsk region on Thursday. (Anatolii Stepanov/AFP/Getty Images)

The official, who declined to be named, said Ukraine had hoped its strikes would have a greater impact on reducing Russian artillery power, but Moscow was adapting.

Fears Moscow has plans for a nuclear power plant

Ukraine also issued dire warnings about a frontline nuclear power plant, the Zaporizhzhia complex, where it said it believed Moscow was planning a “large-scale provocation” as justification for disconnecting the plant from Ukraine’s power grid and connecting that of Russia. 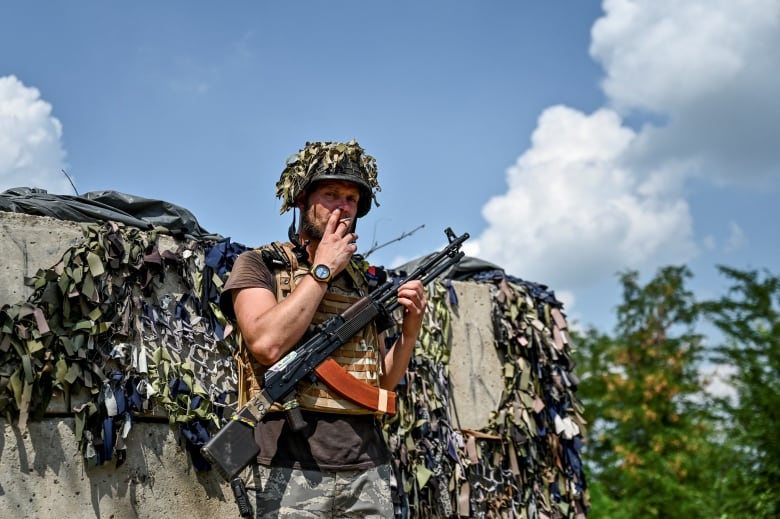 A Ukrainian soldier smokes a cigarette while standing along a front line in the Zaporizhzhia region on Thursday. (Dmytro Smolienko/Reuters)

“If Russian blackmail with radiation continues, this summer may go down in the history of several European nations as one of the most tragic of all time. Because no nuclear power plant anywhere in the world has a procedure for a terrorist state to go nuclear. electricity on a target,” Ukrainian President Volodymyr Zelenskyy said in a speech on Friday evening.

Ukraine’s nuclear operator said on Friday it suspected Moscow of planning to switch the Zaporizhzhia plant onto Russia’s grid, a complex operation that Kyiv says could cause disaster.

The power plant is in the hands of Russian troops on the edge of a reservoir; Ukrainian forces control the opposite bank.

LOOK | The UN calls for a demilitarized zone around the nuclear power plant:

The United Nations and Ukraine want to reach an agreement to end the fighting around Europe’s largest nuclear power plant, but Russia has described the idea of ​​a demilitarized zone as unacceptable.

Moscow has rejected international calls to demilitarize the plant, and Putin on Friday renewed his accusation that Kyiv was bombing it in a phone call with French President Emmanuel Macron, according to the Kremlin’s reading of the call.

Hours after speaking with Putin, Macron on Friday accused the Russian leader of launching a “brutal attack” against Ukraine in an imperialist and vindictive violation of international law.

Macron, who tried tirelessly but unsuccessfully to prevent the invasion and has long praised the importance of dialogue with Putin, has become increasingly critical of the Russian president as the war has dragged on.

He warned French citizens that the ensuing energy and economic crisis facing Europe is not over, calling it “the price of our freedom and our values”.