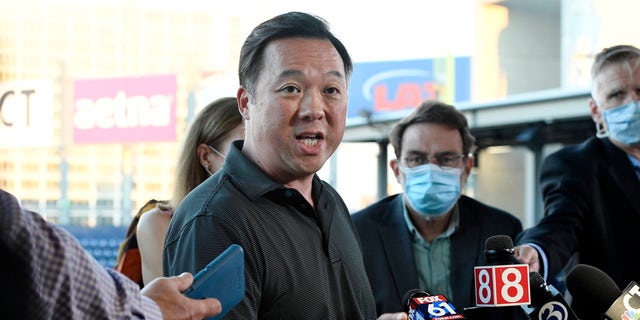 Federal officials have agreed to recognize Connecticut pardons as legally valid again and stop deporting people who have been pardoned for their crimes by a state board, reversing a tough stance by the Trump administration, officials announced Friday.

Connecticut Attorney General William Tong said the Justice and Homeland Security departments under Trump had abandoned six decades of practice singling out Connecticut and refusing to recognize his pardons, because they are issued by a board rather than the governor.

Federal officials have agreed to recognize Connecticut pardons as legally valid again and stop deporting people who have been pardoned for their crimes by a state board. Pictured: Connecticut Attorney General William Tong speaks to the media during a Democratic National Convention watch party.
(AP Photo/Jessica Hill, File)

Several Connecticut residents who were suddenly pardoned were dragged into deportation proceedings and arrested. Tong’s office filed legal challenges to the federal government’s refusal to recognize state pardons and prevailed in court.

“This settlement affirms, with the full force of law, what we have known to be true for more than a century: Connecticut’s pardons are legitimate and lawful,” Tong, a Democrat, said in a statement. “There was no reason for the federal government to ever single out Connecticut and deny our residents the second chance we decided to give them.”

Messages seeking comment were left with Justice and Homeland Security officials. The U.S. attorney’s office in Connecticut, which is also part of the settlement, referred questions to the Justice Department.

Federal officials had previously agreed to begin recognizing Connecticut pardons again in 2020 after Tong petitioned federal agencies. But the Department of Homeland Security did not give final approval to that deal and continued to refuse to honor the state’s pardons, Tong said.

In 2019, the Board of Immigration Appeals ended Walton’s removal proceedings, after deciding that his pardon was valid. The Hartford resident, who came to the U.S. from England when she was 4, was detained for nearly eight months while federal officials tried to deport her. She had been a legal citizen of the United States for 25 years until she lost her legal status in 2012 on theft charges.

In 2020, a federal appeals court overturned a decision by immigration authorities to deport Thompson because he was convicted of a felony assault 19 years earlier when he was 18, despite his state pardon.

Thompson, who lived in Bridgeport, came to the United States from Jamaica in 1997 when he was 14 to live with his father, who is an American citizen.