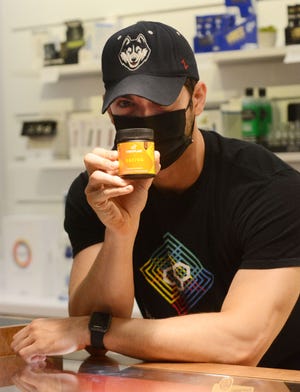 WINDHAM — Benjamin Zacks, the chief operating officer of Fine Fettle Dispensary in Connecticut and Massachusetts, said that despite the stigma that has existed around the marijuana business, towns won’t turn down the tax revenue and job opportunities.

“I hope, rather than having a gut feeling, towns do their research in understanding what these bring to the town, and do their due diligence, rather than quickly saying no to this,” Zacks said.

Some of the towns Fine Fettle is in aren’t turning down the opportunity. On Aug. 25 the Willimantic Fine Fettle location received a special use permit and zoning approval to convert its medical marijuana dispensary facility to a hybrid retailer at it’s existing location, the second one in the state after the Newington Fine Fettle.  Connecticut law defines a hybrid retailer as selling both medicinal and recreational marijuana.

Zacks said the Fine Fettle building was built with having eventual recreational sales in mind. Zacks also said the planning and zoning process in Windham went smoothly, talking about the influx of customers and handling security among other things.

However, there’s still other work that needs to be done. Mainly, that’s getting the license for selling recreational marijuana from the state. Zacks said the state is still working on the fine details for licensing requirements, how to convert from a medical to a hybrid dispensary and further guidance from the state’s Social Equity Council.

“Some of it isn’t set in stone just yet,” Zacks said.

Windham Economic Development Director Jim Bellano said Windham is a town that is more likely to get the license because it has disproportionately affected census tracts, and existing medical operations are favored to get recreational licenses in the short term. However, it’s still possible the license could go elsewhere, since it’s the state’s call.

As for Fine Fettle itself, Bellano said it hasn’t caused issues for the time it’s been in town on the regulator side, nor the complaints side.

“They’re in a really good kind of shopping plaza up on West Main St., a little set back off the road,” Bellano said. “(The plaza) has some good tenants in there, so I think that helps a lot.”

In Norwich, while City Planner Deanna Rhodes said in June her office and the Norwich Community Development Corporation (NCDC) already received requests for growing operations, and even more requests for retail. However, she declined to comment on Thursday.NCDC President Kevin Brown said communities that already have a dispensary, like Windham, have “a leg up.”

Brown also reminded that there’s potential in recreational marijuana beyond just retail operations. This can range from growing and testing, to transporting and training.

While Zachs expects the industry to keep growing, he expects that Fine Fettle will still have the same personnel for the hybrid switch, to support medical patients and recreational customers.

“There are going to be 18 dispensaries and more in Connecticut, who are professional and doing this the right way for the right reasons,” Zacks said.