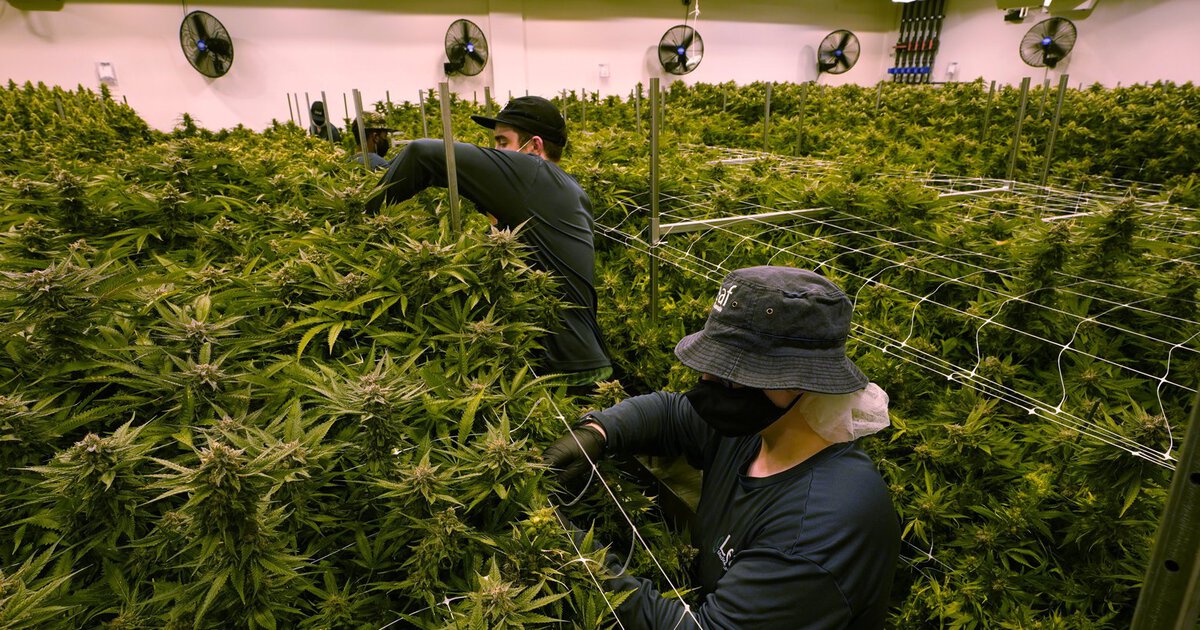 After a year on the front lines, Jason Zvokel traded in his 15-year career as a Walgreens pharmacist for a different kind of drugstore: a marijuana dispensary.

Now instead of administering vaccines and filling prescriptions, he’s helping customers make sense of concentrates, tablets and lozenges. His pay is 5 percent lower, he says, but the hours are more manageable.

“I am so much happier,” said Zvokel, 46, who’s worked in retail since he was 18. “For the first time in years, I’m not miserable when I come home from work.”

The cannabis industry is riding a pandemic high: Marijuana dispensaries and cultivation facilities — deemed “essential” by many states at the beginning of the coronavirus crisis — became an early refuge for retail and restaurant workers who had been furloughed or laid off. The industry has continued to grow, adding nearly 80,000 jobs in 2020, more than double what it did the year before, according to data from the Leafly Jobs Report, produced in partnership with Whitney Economics.

An estimated 321,000 Americans now work in the industry, a 32 percent increase from last year, the report found, making legal marijuana one of the nation’s fastest-growing sectors. In other words: The United States now has more legal cannabis workers than dentists, paramedics or electrical engineers.

Many Americans reassessed their jobs and career prospects as the pandemic reshaped their social and working lives. Retail workers in particular are quitting at record rates, in search of consistent hours, better benefits and more opportunities to advance — which many say they’re finding in the legal cannabis industry.

“There has been a seismic shift of workers from retail and restaurants to cannabis,” said Kara Bradford, chief executive of cannabis recruiting firm Viridian Staffing, where she has fielded as many as 500 applications for one opening. “There is a sense that this is a booming industry that’s fun and interesting, with a lot of opportunities to move up quickly.”

Hourly pay at dispensaries, she said, runs from $12 to $15, in line with most retail and warehouse jobs. But given the newness of the industry, entry-level workers can often move up in less than a year to more specialized positions, she said.

The current labor shortage has put pressure on traditional employers — particularly in the 18 states and the District of Columbia where recreational marijuana use is legal — to ease drug testing requirements. Amazon, the nation’s second-largest private employer, said in June that it would stop screening employees for cannabis use and would support federal legislation to legalize marijuana. A number of other employers, including retailers, restaurants and city governments have also dropped such requirements in an effort to attract workers in a labor market where job openings outpace the number of unemployed Americans 10.9 million to 8.4 million.

Workers’ rights groups are pressing for broader unionization in the cannabis industry, calling it a critical time to establish well-paying jobs with proper protections. With the right policies, they say, the industry could become a pipeline to middle-class jobs, much like the manufacturing industry used to be.

“It is so rare to have an opportunity to shape an industry from its inception,” said David Cooper, an analyst for the Economic Policy Institute, a left-leaning think tank. “There is an urgency to establish guardrails now, for well-paying, middle-class jobs, before cannabis is legalized federally and really takes off. Otherwise these jobs could quickly start to look like existing retail and agriculture jobs, which are often times the worst jobs in the economy.”

Legalization efforts have swept through the country since California began allowing medical marijuana use 25 years ago. Most U.S. states now allow its medical use, with a growing number of them legalizing the drug altogether. (The latest to do so, this summer, were New Mexico, Connecticut and Virginia.) As a result, business is soaring. Sales of legal cannabis grew nearly 60 percent to $19 billion last year, and are expected to balloon to $41 billion by 2025, according to Wall Street research firm Cowen.

For Zvokel, the cannabis industry became a reprieve from the stresses of working for a national retail chain, where his 10-hour shifts often stretched to 12 or 13 hours. By the time he left in April, he was administering 30 to 40 coronavirus vaccines a day, while trying to keep up with his usual duties. Plus, he says, there was constant pressure to increase sales and fill prescriptions as quickly as possible. As a salaried manager, he didn’t receive overtime pay and says it had been at least four years since he got a raise.

“By not moving up, I felt like I was essentially moving backward,” said Zvokel, now one of 10,000 marijuana workers represented by the United Food and Commercial Workers International Union. “People were quitting left and right and I was being asked to do a lot more than I physically could.”

Fraser Engerman, a spokesman for Walgreens, said the company has increased hiring during the pandemic and is expanding its budget for pharmacy operations and training.

“We are committed to increasing support for [our pharmacists] so they may continue providing excellent patient care,” he said.

Five months into his new job, Zvokel says things feel different: The dispensary is rapidly hiring and there is a sense of camaraderie among his colleagues. Labor economists say the industry has become defined by a desire to create favorable working conditions — both to attract employees and to gain broader legitimacy. Many employers also feel additional pressure to treat workers well, given that growing and selling marijuana is still illegal at a federal level, said Raymond Hogler, a professor at Colorado State University who studies marijuana labor relations.

“There are many issues with working with marijuana: Dust, safety concerns, dangers of harvesting the plant itself,” he said. “And, frankly, there is extra pressure to treat workers well because the industry wants to show that it provides good, solid employment.”

Brianna Price recently left a job as a grocery stocker to become a “budtender” — an industry term for a sales associate — at a dispensary. She’s been promoted three times in the year she’s worked there, and now oversees all purchasing and a staff of nine.

“It’s the best job I’ve ever had,” said Price, 31, of Midland, Michigan, who worked as a paralegal for eight years before she was laid off early in the pandemic. She took a part-time job at the supermarket chain Aldi, but says it paid so little that she had to move back in with her parents. There were other downsides, too: Her shifts often started at 5 a.m. and sometimes consisted of standing outside, wiping down shopping carts for hours on end.

“I really wanted to take my time during COVID to reevaluate my life and make a career change,” she said.

At the Hempire Collective in Loomis, Michigan, where she works, sales have more than doubled in the last year, to roughly $500,000 a month, according to co-owner Mario Porter. He’s expanded his dispensary staff from seven to 12, and expects to hire more this year. Many of his new employees, he said, come from retail jobs that they left during the pandemic.

He has dozens of applications on his desk, and hundreds more that were submitted online.

“This summer has been exceptional,” he said. “The majority of my employees come from retail backgrounds because they understand the most important part of this job: To listen to customers and meet their needs.”

In South Bend, Indiana, Ashlyn Marshall, 28, recently quit her full-time job with an RV manufacturer to work part-time at a marijuana dispensary. Her struggles with anxiety during the pandemic made her realize “a work-life balance meant more to me than money.” She earns $14.50 an hour, compared with $16 at her last job.

“I was getting cussed out by customers every day, while doing the jobs of three people,” she said. “It was just complete burnout.”

In her new role, she says the tone among managers and employees is much calmer and friendlier.

“Management is a lot more human. If I make a mistake and I apologize, the general vibe is, ‘It’s OK, we all make mistakes. Let’s fix this together.’ I’ve never had that before.”

This story was originally published at washingtonpost.com. Read it here.