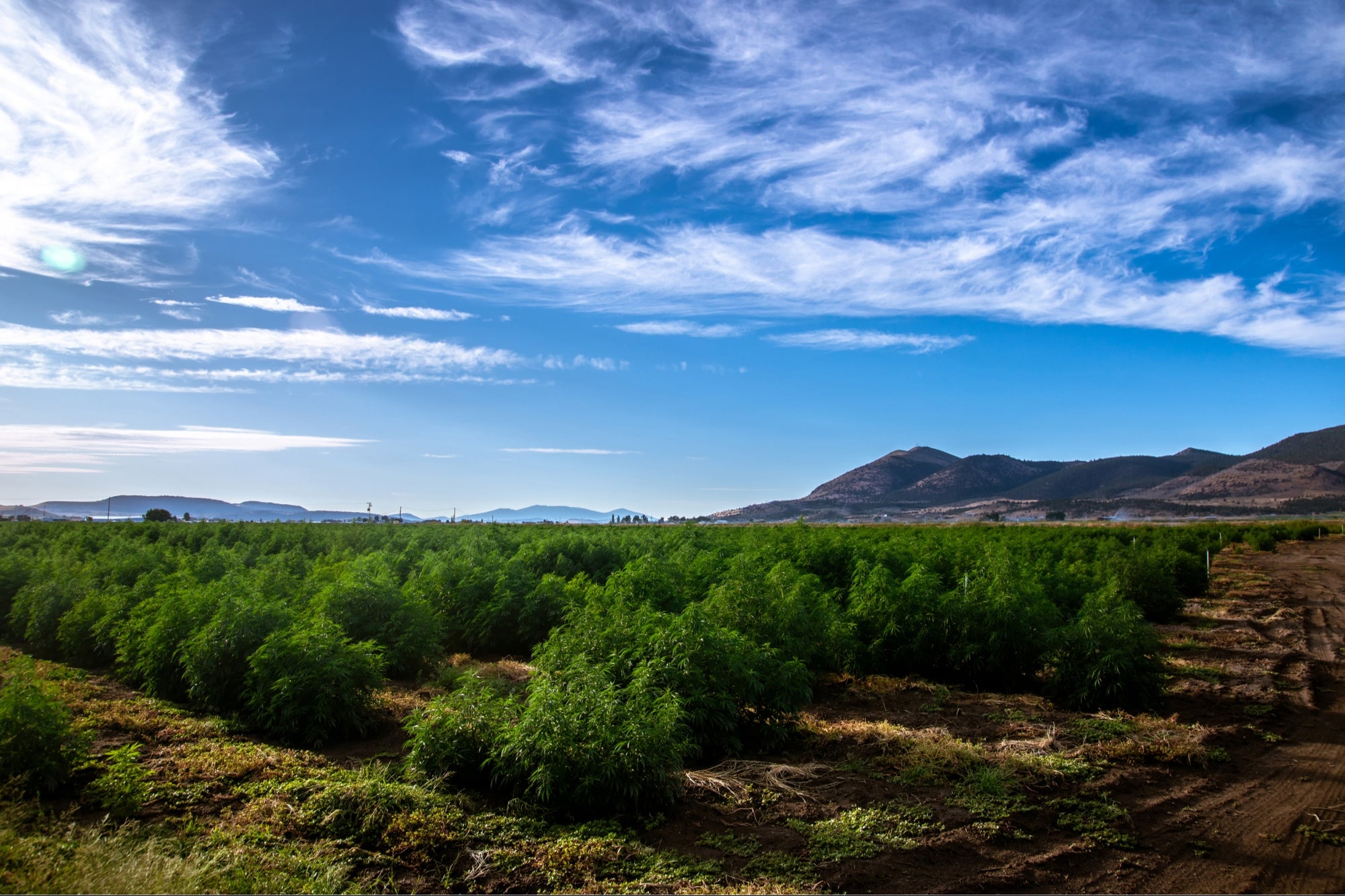 In the early 1990s, Mike Benziger was giving a tour of his California winery when one of the guests asked a simple, but lifechanging question.

“One of the women said, ‘Mike, how come I don’t hear any birds? Where’s all the life? I thought vineyards were full of life,’” Benziger remembers.

At the time, Benziger says his vineyard was following industry best practices, as the company had hired a leading viticulture specialist to help produce grapes.

Like many farms of the era, that meant eliminating all competition for the plants, from weeds to wildlife — including birds — in order to focus all efforts and inputs solely on growing grapes. But the woman’s question shocked him and has stuck with him to the present.

“I had an epiphany: I suddenly realized we had killed the environment completely,” he says, adding that at that moment, he started to see the full picture. “And I realized why we were having these erosion problems and why every time we’d have a rainstorm the parking lot would fill up with mud.”

Benziger began looking for a new way and in 1995 came across biodynamic agriculture, a complicated, eco-friendly technique that treats the farm as a single organism, connected and intertwined with the quality of crops the land produces, instead of focusing on any single input. Six years later, The Benziger Family Winery was certified biodynamic, the same method he uses today at Glentucky Family Farms to produce highly-sought-after, small-batch cannabis.

“The quality of our fermentations increased and eventually, over time, we were able to develop very, very distinct attributes that were only associated with our property because of the proprietary biology that forms over time,” he says. “So it made me a true believer.

The decision led to a wave of success and awards for Benziger and the winery, including features in Wine Spectator magazine, being named the first ever “Green Winery” in Sunset magazine and a Sonoma County Business of the Year recognition. It also set him on a path that finds him recreating his glory days from the wine industry in California’s burgeoning cannabis market, albeit on a smaller level, at Glentucky Farms, where he was the first in the country to grow cannabis on a certified biodynamic farm.

“There’s 2 million farms in America. There’s 17,000 organic farms. But there’s only 160 biodynamic farms,” he says. “I don’t know how many certified cannabis growers there are, but you can count it on one hand — that I know is a fact. It’s rare.”

Also rare is the flower he produces, about 60 pounds per year. He sells it through a unique business model based off his winery days that sends a full harvest from each strain to a handful of stores.

“Everything that I’m going to be putting in the ground is already spoken for,” he says.

RELATED: 5 Predictions for Craft Cannabis in 2021

The Glentucky Family Farm sits on 8.5 acres in the Sonoma Mountains of Northern California. It’s a small farm, but a working one, growing a variety of vegetables of his family and his daughter’s restaurant, as well as a handful of medical crops for a doctor back East.

The farm has been Demeter-certified biodynamic for more than 20 years, creating a unique biology completely free of all chemicals and toxicity and giving Glentucky Family Farms cannabis its own distinctive profile that is especially important to medical patients, especially those with autoimmune diseases and cancer.

“That biology can contribute to the color, flavor, intensity, terpene profiles and such of the plants that grow on the farm,” Benziger says.

Purity is important to Benziger because he first tried cannabis to help combat the side effects from cancer treatments he received 10 years ago.

“I thought about it and said, I have a farm that’s been certified 21 years in a row biodynamic. That means I can grow really pure, medical-grade cannabis that maybe can help other people that went through the same things I did,” he says.

Benziger got a license to grow 50 plants outdoor. In 2015, Demeter USA, the organization that maintains the biodynamic standards created in Germany in the early 20th century, certified the farm’s cannabis. Benziger also has an indoor license, but since indoor grows can’t be certified biodynamic, he only uses that for research and development, mostly in the winter months.

Benziger says cannabis is a welcome addition to the farm, even if state regulations force him to keep it separate from other crops, something that made the certification questionable at first because it complicates things like crop rotations and fallowing.

“I found a way around it by growing really good cover crops,” he says, “but even Demeter was very skeptical that I could do it, and it took me a long time to convince them that I had to grow only in one location.”

Benziger says the biggest issue is keeping the soil healthy, because cannabis is “among the greediest plants on the planet” and sucks nutrients out of the soil.

“In biodynamics we don’t have a huge array of tools,” he says. “It’s not like we can pull up a dump truck full of nitrogen and dump it on there. We have limits to how much nitrogen we have to use.”

Instead, Benziger grows fava beans, which pull nitrogen out of the air and store it around their roots. After he harvests the beans for the restaurant, the rest of the plant gets tilled back into the soil, acting as “a time-release capsule” for nitrogen and moisture.

He also has to be sure to grow insectary plants that will attract “good bugs” to go out and eat pests since he can’t spray. Benziger says unlike traditional farming, biodynamics requires farmers to watch their crops carefully for indications of potential problems down the road. Every day he and his wife — Glentucky’s only employees — have to pay attention to the plants and provide what they need on their schedule, not the farmer’s.

“In biodynamics, the No. 1 tool in farming is not a tractor, it’s not clippers, it’s consciousness. It’s a heightened state of awareness.” Benziger says. “So we spend a lot of time looking very deeply into plants so that we can see conditions that will cause problems in the future. Because we don’t have any silver bullets. Once we have a problem, we’re fucked.”

But there’s no denying the product or its popularity. But with a license for only 50 plants — about 60 pounds of flower per year — Benziger has pre-sold his entire crop, but in a rather unique way. He works closely with five dispensaries and each one gets the full harvest from a particular strain. It’s the fifth year he’s done this and says it helps prevent competition and provides exclusivity to each dispensary.

“I don’t grow that much, but I do have people that are very loyal and are my customers through thick and thin,” he says. “But I definitely get a premium for being certified biodynamic.”

Like the farming method itself, Benziger says, his sales strategy is a holdover from the winery, which he sold in 2015. In his old business, he created a direct-to-consumer wine club that educated customers on the difference between biodynamic growing methods and those at a more traditional winery. It grew to 13,000 members and became a main source of income.

It is the same formula he uses growing cannabis, which has given him loyal business customers. This year, Glentucky is growing four strains of cannabis — La Bomba, Prayer Pupil, Banana MAC and First Class Funk — which will be sold exclusively through three local dispensary groups: Solful, OrganiCann and SPARC.

He also says there’s a larger education component involved, both with budtenders to explain why Glentucky cannabis is different, but also with consumers, which is why he does meet-and-greets at stores to talk about biodynamic principles, part of a larger effort to try and change people’s views on growing cannabis and farming in general.

“What I’m trying to do is elevate the idea that pot is grown in a responsible way for the entire industry, at least for the artisan part of it,” he says.

Benziger says his goal now is to tell his story and try to be a good example of how biodynamics can help heal farms and the earth as a whole, while providing cannabis farmers a way to distinguish their product from other brands. Benziger says that without his certification, he would have to sell for less than the cost of production. But as a whole, Benziger says farmers tend to be very averse to change, something he says as a first-generation farmer he did not have to overcome when he saw the damage he was doing to his vineyard’s soil those decades ago.

“Farming is a violent activity. If you don’t have a way of healing it on a day-in, day-out basis, eventually the farm will become sick,” he says. “My goal now is to try and be a good example and try to be able to teach as many people this natural technology. Because biodynamics has this ability beyond all other kind of agriculture to heal the earth.

“I fucked it up really bad and in the process of trying to make it better stumbled on biodynamics and it became our formula for success in both healing the land and helping market our crop,” he says.