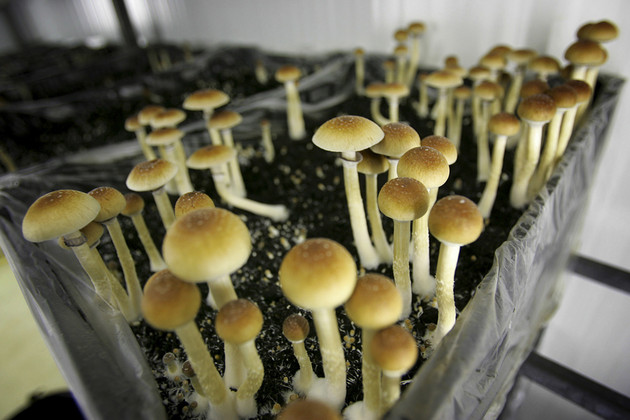 What was something of a taboo issue half a decade ago is now the subject of bills from both Republicans and Democrats in more than a dozen states. They range from proposals to study the medical benefits of psychedelics to bills that would allow adults to consume such drugs under supervision.

“It’s gone viral and sparked an interest nationwide,” said Democratic Washington state Sen. Jesse Salomon, who is sponsoring a bill that would allow psilocybin use among adults over age 21 under supervision. “I just didn’t know there were so many like-minded people on this.”

Oregon led the nation when voters approved a ballot measure in 2020 to legalize and regulate psilocybin therapy, alongside another decriminalizing drug possession more broadly. Voters in cities such as Denver, Oakland and Washington, D.C., have also pulled back on enforcing laws against magic mushrooms and other plants that contain psychedelic compounds. Now, these ideas have spread to a politically disparate collection of states such as Utah, Missouri, Connecticut, New Jersey, Texas and California.

The newfound enthusiasm for loosening restrictions on psychedelics is yet to gain much traction with federal policymakers, either in Congress or the executive branch. Like marijuana, most psychedelics — including psilocybin, LSD and MDMA — are classified as Schedule I narcotics under the Controlled Substances Act, meaning they’re deemed to be highly addictive and have no medical applications.

However, there are some signs of growing interest: In January the National Institute on Drug Abuse hosted a workshop on “psychedelics as therapeutics,” and last year it awarded a $4 million grant to explore the impact of psilocybin on tobacco addiction. In addition, Rep. Alexandria Ocasio-Cortez (D-N.Y.) has sought to make it easier to conduct psychedelics research, but those efforts have been rejected by lawmakers.

The U.S. had a similar “psychedelic renaissance” once before. LSD was the subject of more than 1,000 scientific articles published between 1950 and 1961, and psychiatrists in North America pioneered the therapeutic use of LSD in the early ‘50s.

But the substance became politicized and stigmatized as a dangerous part of the 1960s counterculture, stifling research and sending psychedelics underground for decades.

What was once the province of acid-heads in Haight-Ashbury has since emerged as a nootropic tool embraced by Silicon Valley tech bros and a potentially lucrative business opportunity for investors. Popular writers such as Michael Pollan and Ayelet Waldman documented their own use of these compounds. And researchers at NYU and Johns Hopkins were eager to pick up where others left off, creating research and training programs focused on therapeutic uses just as there is now greater attention on mental health.

“In a post-pandemic America … we have to address the mental health crisis as thoughtfully as we can with all the options on the table,” said Oklahoma state Rep. Daniel Pae, a Republican who introduced legislation this year to facilitate psilocybin research, in an interview.

Pae said he was “humbled” by the bipartisan support for his bill, which the House approved earlier this month. He was inspired by similar legislation passed in Texas last year and is driven by a desire to help veterans. Pae represents a district near the U.S. Army post of Fort Sill, and is concerned about the suicide rate among Oklahoma’s veterans, which is higher than the national average.

Pae is not alone: Similar research bills have been introduced by Republican lawmakers in Maryland, Utah and Missouri.

The impact of classic psychedelics such as psilocybin and LSD on the brain differ from other drugs like MDMA. But fMRI imaging of people under the influence of these drugs indicate an impact on the brain’s “default mode network” — which connects different regions of the brain that appear to be involved in one’s sense of self and conception of other people. These studies offer clues to how these substances can be therapeutic.

Veterans have become leading advocates in the push to allow legal access to psilocybin, sharing personal stories about how their own experiences with psychedelics have helped them cope with the trauma of war and help treat their anxiety and depression.

“For a few hours, it takes the blinders off that keep you focused on the scary painful things that are in front of you,” Eric Gaden, a veteran and nurse, told lawmakers. “Rather than just masking a symptom, it allows you to go and look at the cause of the problem and figure out the best way to address that moving forward.”

Yet it likely will be a while before Washington residents get access to psilocybin. A bill that would direct the state health department to develop a regulatory program to allow adults to use psilocybin therapy services has been tabled. Instead, lawmakers approved a budget that includes $200,000 for researching psilocybin and how to implement a legal program.

Salomon said he’s hopeful that work will allow the Legislature to move quickly when his legislation is picked up again. “We should be ready to roll next session,” he said.

There’s little organized opposition to these proposals so far. The only people who testified against Salomon’s bill did so because they felt his proposal wasn’t broad enough. Not a single public commenter registered any public health concerns, while a litany of medical professionals and researchers talked up the scientific promise of therapeutic psychedelics.

Existing research suggests these drugs are quite safe in certain respects: The risk of fatal overdose or addiction is very small compared to other illicit substances such as heroin, or even alcohol.

But just like cannabis, psychedelic substances aren’t harmless. There are stories (though very few) of people becoming dependent or even dying after consuming these substances.

Proponents will argue that regulating the use of these substances in a therapy setting will help prevent such harms. But that model comes with its own risks: Cover Story, a New York Magazine podcast series, investigated the abuses that can happen in psychedelic therapy, even during federally sanctioned clinical trials. Many of these substances can leave people who are under their influence vulnerable to abuse and manipulation by their therapists or guides.

While researchers focus on the benefits of psychedelic therapy, there’s little analysis seeking to understand how to help people who have a difficult experience while taking these drugs — a significant minority based on the available data.

“This is a glaring hole in the research,” said Jules Evans, an honorary research fellow at Queen Mary University of London who is seeking funding to conduct empirical research on how to help people who experience difficult trips. “Imagine if NASA spent all its money researching how to take people into space, and invested nothing on how to bring people back to Earth.”

Evans is quick to emphasize that he supports decriminalizing psychedelics and research with the aim of eventually providing legal access to these compounds. But he’s concerned that the field is not mature enough to be fully aware of the risks, yet is fearful that talking about their potential harm could undo the progress in dispelling the stigma around such drugs.

“If you go to the Amazon jungle, you know you’re rolling the dice a bit,” Evans said. “[In] the medicalized route of patients seeking help, they should be informed of the risks.”

Just like cannabis, the psychedelics movement faces deep divisions over decriminalization, regulation and social justice. With fears over big marijuana firms dominating the debate, lawmakers and advocates are trying to address similar issues in the psychedelics space.

“Cannabis is a billion-dollar industry in the state and people are still walking around with felonies on their records,” said Oregon state Sen. Akasha Spence Lawrence, a Democrat who is sponsoring a bill to promote equity in the psilocybin program.

Use of psychedelic plants has a long tradition rooted in the intersection of spirituality and medicine among Indigenous populations.

“We have to ensure that communities of color gain access to the treatment [and] that they also gain equitable access to facilitating the treatment,” Lawrence said in an interview.

Oregon officials are running into tensions as they move to create the first state-regulated psilocybin program. Regulating the practice is supposed to prevent abuses and help ensure safety, but requiring significant training could pose barriers to entry for those who lack financial resources.

Meanwhile, biotech firms funded by venture capital are eyeing such compounds, buoyed by promising research to treat a variety of mental health issues, and even other conditions like cluster headaches.

“There’s been a true cultural shift, mainly due to the recognition that these compounds … likely will have a huge effect on how we treat mental health, said Daniel Goldberg, co-founder of Palo Santo, an investment fund focused on psychedelic therapeutics.

Both state- and federal-sanctioned research is poised to move forward in the meantime.

The FDA has granted breakthrough therapy status to both MDMA, a psychoactive drug similar to stimulants and hallucinogens, and psilocybin in recent years, a designation that recognizes the drugs’ promising early clinical research for treating serious conditions.

Groups behind this political push intersect with the marijuana advocacy world. The Multidisciplinary Association for Psychedelic Studies, Students for Sensible Drug Policy and Drug Policy Alliance have all supported broader efforts to decriminalize drugs other than marijuana.

Financial backers of the efforts also overlap with marijuana advocacy — New Approach PAC, which has backed most of the successful marijuana legalization ballot measures across the country, chipped in more than $3.8 million to two ballot committees backing Oregon’s psilocybin initiative. New Approach is also backing a campaign to put psilocybin legalization on the ballot in Colorado this November. Dr. Bronner’s, purveyors of castile soap, has given millions to back marijuana reform, along with psychedelics liberalization too.

“It does feel like cannabis activism 10 years ago,” said Jason Ortiz, executive director of Students for Sensible Drug Policy.