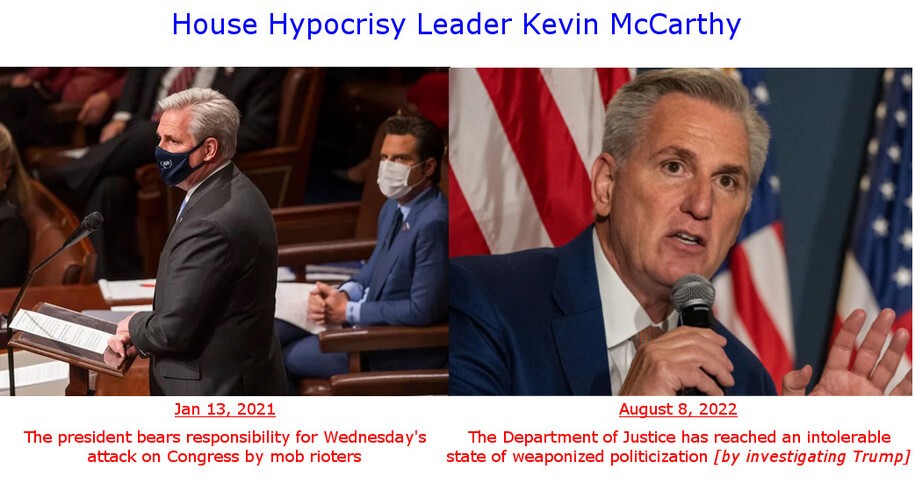 On January 13, 2021, when heat was still emanating from the embers of public outrage in response to January 6, House Republican Leader Kevin McCarthy believed the contemporary wisdom that Trump was toast. He was certain enough of Trump’s death to state on the House floor, “The president is responsible for Wednesday’s attack on Congress by mob rioters.” Strong words, which seemed to put aside partisanship for the good of the country and democracy, an act that was very out of character for McCarthy.

However, McCarthy did not anticipate the cult the obsequiousness and ignorance of the MAGA sheep, nor Rasputin’s ability to “grab them by the cunt” Teflon Don to once again fail to account. The Lyin’ King began to rise from the ashes, and McCarthy soon found himself doing a spectacular 180°, earning his title as leader by being unrivaled among his fellow toadies (McConnell, Graham, etc.) in the shamelessness of his moves to get back into Father Slob’s good graces, including at least one humiliating pilgrimage to Mar-a-Lago.

So it’s no surprise that when the FBI today conducted a legal search of Mar-a-Lardo’s residence in Florida — to investigate irregularities like those that McCarty himself acknowledged when Trump appeared impotent — which McCarthy immediately defended the now relevant. Winnie the coup d’étatstating:

“I’ve seen enough. The Department of Justice has reached an intolerable state of weaponized politicization… When Republicans take back the House, we will conduct immediate oversight of this department, follow the facts, and leave no stone unturned… Attorney General Garland, preserve your documents and clear your calendar”

no kev we’ve seen enough, from your clown show. Your BS may impress the MAGA morons you count on to carry out the coup you condemned just 18 months ago, but we see through your blatant nonsense, as history will, where your legacy will be summed up in one word: shit stain.

Yes, this is not really news, sadly it is a predictable fact of the pathetic and transparent propaganda campaigns of the republican (sic) party reigns to try to destroy democracy to further their own power and gain. So get your ass and every reasonable person you know to the polls in November, it might be the last stand!