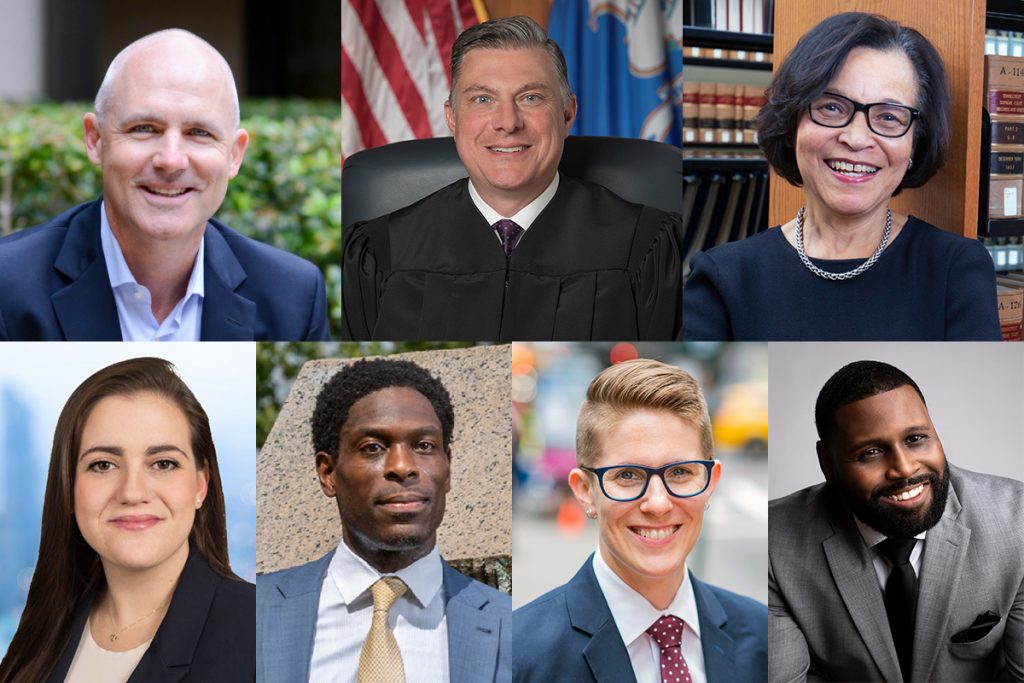 The University of Connecticut Law School Alumni Association will honor seven graduates at a virtual awards ceremony and annual meeting at 6 p.m. on Oct. 26, 2021. The event is open to all UConn Law alumni.

The annual awards recognize the contributions of UConn Law graduates to the law school, the legal profession and the community.

In 2020, Callahan and his wife, Dana Weintraub, established the Mike Callahan ’95 Family Scholarship for Veterans at the UConn School of Law.

Judge Robert W. Clark CLAS ’93 JD ’97, who was sworn in as a judge of the Connecticut Appellate Court in March 2021, will receive the Public Service Award. Clark previously served as a Superior Court judge in the Bridgeport GA and juvenile court and as general counsel to Gov. Ned Lamont. He worked for 14 years in the Connecticut Attorney General’s Office, first as an assistant attorney general in the Special Litigation Department and later as special counsel to Attorney General George Jepsen. He previously worked for the law firms of Day, Berry & Howard LLP, now Day Pitney, and Kramer Levin.

Constance Belton Green, JD ’72, the first Black woman to graduate from the UConn School of Law, will receive the Distinguished Service Award. In addition to her JD, Green holds an education doctorate from Teachers College Columbia University. She began her legal career as a staff attorney at the New Haven Legal Assistance Program and at Greater Hartford Legal Aid. She served as an education consultant at the Connecticut Department of Education and as chief diversity officer at Eastern Connecticut State University. Green is the author of “The Trailblazing Bessye Bennett” and “Still We Rise: African Americans at the University of Connecticut School of Law.”

Green, a diversity consultant, serves as a co-chair of the Diversity Equity and Belonging Committee at UConn Law. The Constance Belton Green Diversity Fund, established in 2020 by Dean Eboni S. Nelson, supports diversity and social justice initiatives at the law school.

The association will also honor four alumni with the Graduates of the Last Decade Impact Award:

Alexandra Cavaliere JD ’16 is an associate at Locke Lord LLP, where she focuses on general corporate, regulatory and transactional insurance matters. She began her legal career as an associate in the Boston office of Proskauer Rose LLP. After a long journey beginning in July 2019, she was officially diagnosed with amyotrophic lateral sclerosis, also known as ALS and Lou Gehrig’s disease. While she is still working, she is transitioning her focus to advocating for ALS patients’ access to funding and treatments full-time.

DeVaughn L. Ward JD ’11 is senior legislative counsel at the Marijuana Policy Project and has worked in several states on marijuana legalization. He previously spent nearly a decade gaining experience in law and public policy by serving in legislative roles in the Connecticut State Senate, the Connecticut Department of Public Health, and the City of Hartford. In addition to his role at the Marijuana Policy Project, he manages a boutique civil rights practice in Hartford and has worked on behalf of Connecticut inmates in their battle to receive adequate medical care.

“One of the wonderful traditions of the UConn Law School Alumni Association is the annual awards dinner,” association President Tara Trifon said. “Not only is the event an opportunity for fellow alumni to connect — even if we have to do it virtually — but it offers us a chance to honor some of the incredible graduates from our alma mater. This year’s honorees include people who have devoted their time and energy to helping others through education, public service and advocacy. Indeed, they have worked tirelessly to make our society and legal community a better place. They are truly inspirational leaders, and the LSAA is honored to be able to present them with these awards.”