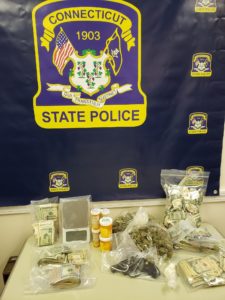 GOSHEN – Authorities in New York and Connecticut have arrested several people in connection with a long-term drug sale and possession operation.

Dubbed “Operation Off the Brick,” the investigation involved the trafficking of cocaine in Orange County and Connecticut.

Antonio Perez-Molina, 39, of Otisville, was arrested and charged with being a major drug trafficker as well as criminal sale of drugs, conspiracy and criminal possession of a weapon.

Juan Mejia, 51, of the Town of Blooming Grove, was charged with conspiracy, criminal possession of a controlled substance, and criminally using drug paraphernalia.

Anthony White, 50, of Middletown and Jenah Vega, 22,of Kerhonkson, were charged with conspiracy.

During the execution of the search warrants, police seized over 1,100 grams of cocaine, three loaded handguns, a shotgun and approximately $70,000 in cash.

Perez-Molina, Lopez, White, Mejia and Vega were arraigned with Perez-Molina and Mejia remanded without bail. Vega was released on her own recognizance despite the district attorney’s request for bail. White and Lopez were released on their own recognizance because they are charged with offenses that are not bail-eligible under New York’s current bail laws.

“The sale of illegal drugs is among the worst problems in society today and illegal narcotics activity has a significant adverse impact on our communities,” said District Attorney David Hoovler. “That activity is especially egregious when it crosses state lines, as it did in this case.”