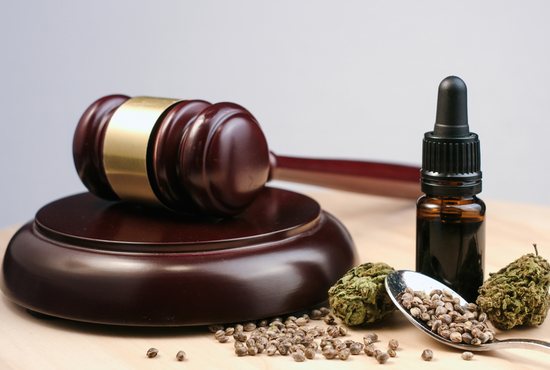 When the Minnesota House passed HF 600 on a vote of 72-61 to legalize recreational marijuana May 13, it brought the state one step closer to joining 19 other states, including Michigan and South Dakota, as well as the District of Columbia.

With Gov. Tim Walz in favor of the legalization, only the Minnesota Senate stands in the way as lawmakers prepare to open the second year of the biennial session Jan. 31.

It is a step the Minnesota Catholic Conference, representing the public policy interests of the Catholic Church in the state, does not want the state to take.

“Our direction on this issue comes from the pope himself,” said Ryan Hamilton, MCC’s government relations associate, in an email exchange with The Catholic Spirit. “In his 2014 address to the International Drug Conference in Rome, Pope Francis said, ‘Attempts, however limited, to legalize so-called ‘recreational drugs,’ are not only highly questionable from a legislative standpoint, but they fail to produce the desired effects.”’

House Majority Leader Ryan Winkler, DFL-Golden Valley, the legislation’s sponsor, has argued for legalizing recreational marijuana in part because he believes law enforcement efforts against the drug have failed. The drug is readily available across the state, and Blacks are disproportionality arrested and penalized for marijuana possession compared with whites, a racial injustice, Winkler told The Catholic Spirit.

“In all my conversations, and I have had a lot of conversations on this issue, I have not had anyone say that the current system we use is much benefit to anyone,” Winkler said.

In addition, many states have legalized recreational use of marijuana, and he thinks Minnesota should step up now to create a regulatory structure that can address legitimate concerns about youth access, health and road safety.

“The change is coming,” Winkler said. “As states around us legalize recreational marijuana, it will not be viable for Minnesota to be an island.”

Legalizing marijuanaColorado and Washington first legalized recreational marijuana in 2012. Since then, 17 other states, with Connecticut the latest, June 22, and the District of Columbia, Guam and the Northern Mariana Islands have followed suit, according to the National Conference of State Legislatures. Others are: Alaska; Arizona; California; Illinois; Maine; Massachusetts; Michigan; Montana; Nevada; New Jersey; New Mexico; New York; Oregon; South Dakota (tied up in court challenge); Vermont; Virginia.

Thirty-six states, including Minnesota since 2014, as well as the District of Columbia and three U.S. territories allow for medical use of cannabis products. In November 2020, voters in Mississippi passed a ballot initiative to allow for medical use, but it was overturned by the state Supreme Court.

Winkler held 15 town hall meetings in communities across the state on recreational marijuana before introducing his bill in February. He consulted with Walz and 13 state agencies, held 250 meetings with individuals and groups, and the bill made its way through a dozen House committees before getting to the floor.

But the Republican-controlled Senate did not allow a hearing. HF 600’s companion bill, SF 757, has languished. Then-Senate Majority Leader Paul Gazelka of East Gull Lake has stepped down from his leadership position to mount a campaign for governor. Republican Sen. Jeremy Miller of Winona will be the new majority leader.

“Jeremy Miller may have a different outlook and be more willing to put it up for discussion,” Winkler said of the marijuana bill. The legislation does have bipartisan support, he said, citing the fact that six Republicans joined Democrats to pass HF 600.

MCC’s Hamilton said he doesn’t think the Senate will pass SF 757 in 2022, but the push to legalize marijuana will not go away. Miller might open the door to debate on the Senate side this session, Hamilton said.

“He has said only that he has ‘concerns’ about legalizing recreational cannabis,” Hamilton said. “He has not provided the type of clear and firm statements of opposition that we received from Sen. Gazelka.”

And while Winkler is running for Hennepin County Attorney in November 2022, he said he intends to remain majority leader through this legislative session.

The fact 2022 is an election year could impact the attention given to legalizing recreational marijuana, Hamilton said. “We (MCC staff) imagine the attention on legalizing marijuana will take the form of proponents pressuring the Senate to act on the Winkler bill and blaming any lack of movement toward legalization on their political opponents,” he said.

Winkler’s bill would allow adults 21 and older to possess in public up to 2 ounces of cannabis and up to 10 pounds in their homes, and cultivate up to eight plants, four of which could be mature.

Among other things, it also would focus on developing micro-businesses and a craft market, in an effort to keep large companies from taking over. To address racial inequities in previous law enforcement actions against marijuana, the bill would expunge most cannabis convictions, Winkler said. The bill would fund public health awareness campaigns, youth access prevention and substance abuse treatment. It would provide grants, loans, technical assistance and training for small businesses in the trade, require testing and labeling of products, and restrict packaging for dried cannabis and infused products based on dosage size.

While some argue that the black market will undercut a legal market every time, Winkler said HF 600 is not set up as a state revenue engine through its tax structure of marijuana businesses and transactions.

“The goal of our bill is not revenue,” Winkler said, and that should keep costs down.

Hamilton said the bill’s regulatory structure fails in the area that matters most: potency limits on THC, tetrahydrocannabinol, the main psychoactive compound in cannabis.

“Recreational marijuana products tend to be extremely potent,” Hamilton said, with some concentrated oils, waxes and edibles at up to 90% TCH. “This is not the low potency ‘grass’ of yesteryear, making it more dangerous. The truth is, the average potency of marijuana has skyrocketed since the 1970s, and research demonstrates it is associated with substance abuse disorders, drugged driving crashes, lower IQ and other negative consequences.”

A study published in Biological Psychiatry in 2016, “Changes in Cannabis Potency over the Last Two Decades (1995-2014) — Analysis of Current Data in the United States,” backs Hamilton’s claim, finding that potency of illicit cannabis plant material alone had increased from about 4% in 1995 to 12% in 2014. “This increase in potency poses higher risk of cannabis use, particularly among adolescents,” the report concluded.

Some cannabis concentrates sold in Colorado, Oregon and other states with legalized recreational marijuana have potency rates of 60% to 80%.

Racial inequity found in marijuana enforcement is a concern, Hamilton said, but it can be addressed in separate legislation. There is no need to set up a for-profit industry that can take advantage of the vulnerable, he said.

“Our view is that the House legalization bill misleads Minnesotans of color by perpetuating the myth that the only solution to disparate enforcement of current marijuana laws is full legalization and commercialization,” said Hamilton, who is Black. “Even though Black and white people use marijuana at similar rates, a Black person is almost four times as likely to be arrested for marijuana possession than a white person. Meanwhile, the facts reveal that African-Americans are twice as likely to be arrested for marijuana in Colorado and Washington, both states that have legalized recreational use and sales.

“As an omnibus bill, HF 600 conflates credible demands for social justice and criminal justice reform with the profit motives of a small group of privileged investors,” he said. “Social and criminal justice reforms related to marijuana can be implemented as stand-alone policy measures without necessitating the legalization of recreational marijuana use and enabling a for-profit industry to prey on the poor and vulnerable.”

Dr. Vic Vines, a former Midwest regional medical director in Center City for the Hazelden Betty Ford Foundation’s addiction and mental health services, said recreational marijuana is problematic because while cannabis doesn’t have a reputation for being addictive, it can lead some people into dependency.

“The issue concerning me is that when we make something available recreationally, we give some idea it is not a problem. But in some, (marijuana) can lead to dependency, mental illness and learning disabilities,” Vines said. “Especially young people.”

Minnesota legalized medical marijuana in 2014. Until this year, it was one of the strictest programs in the country because it required all products to be in liquid, oil and pill forms. It also was relatively expensive. That changed May 18 with passage of a bill that beginning March 1 — or until appropriate testing is in place for dried raw cannabis used as medicine — will allow patients to smoke the dried plant, a less expensive product. The state’s medical marijuana manufacturers are LeafLine Labs and Vireo Health.

MCC has been neutral on medical marijuana, arguing that whether it is an “effective therapeutic is a question of some debate, and one best left between doctors and individual patients,” Hamilton said.

“That said, the Legislature’s decision this year to allow smokeable medical marijuana seems incredibly imprudent and will have to be well monitored to prevent it from turning into the backdoor legalization of recreational cannabis,” he said.

The U.S. Food and Drug Administration “has not found smoked marijuana to be either safe or effective as medicine for any condition, let alone anxiety or PTSD (post-traumatic stress disorder),” Hamilton said.

The federal government considers marijuana an illegal drug but has largely left enforcement to states.

Statistics from the medical cannabis program in Minnesota, kept by the Department of Health’s Office of Medical Cannabis, show that as of Dec. 31, 2020, about 7% of patients in the program were suffering from cancer, 1% had HIV/AIDS, 1% had glaucoma and 1% had a terminal illness.

About 63% of patients reported having intractable or chronic pain, 25% had PTSD and 11% had severe and persistent muscle spasms.

“Allowing recreational use as a means of self-medicating is a bandage, not a solution,” Hamilton said. “It seems that reform of the medical marijuana system would be the logical step.”

MCC will continue to oppose efforts to legalize recreational marijuana because Catholics must help lawmakers understand the principled reasons for opposing legalization of a recreational cannabis industry, Hamilton said. Odds are good that if the effort to legalize fails this session, similar bills will be introduced in 2023, he said.

“We want to make sure legislators, and their constituents, are hearing from more than industry proponents who only give one side of the story,” he said.

“MCC’s opposition moving forward will be based on standing up against an industry that has proven to do more harm than good to the poor and vulnerable and the common good,” Hamilton said. “Specifically, this means we will be working with our partners to dispel myths about legalization, expose false binary (dual) choices which proponents so often portray as the only way, and share empirical evidence of the harmful effects of legalization.”