Home Miscellaneous Marijuana and CBD Info Mixing Weed and Alcohol — the Good, the Bad, and the Ugly

Taken responsibly, both alcohol and cannabis can be a great time. But what about when you mix the two? Drinking alcohol and getting high at the same time can enhance the effects of both and potentially lead to some real side effects – and not just the morning after. Here’s what happens when you get to mix the two. 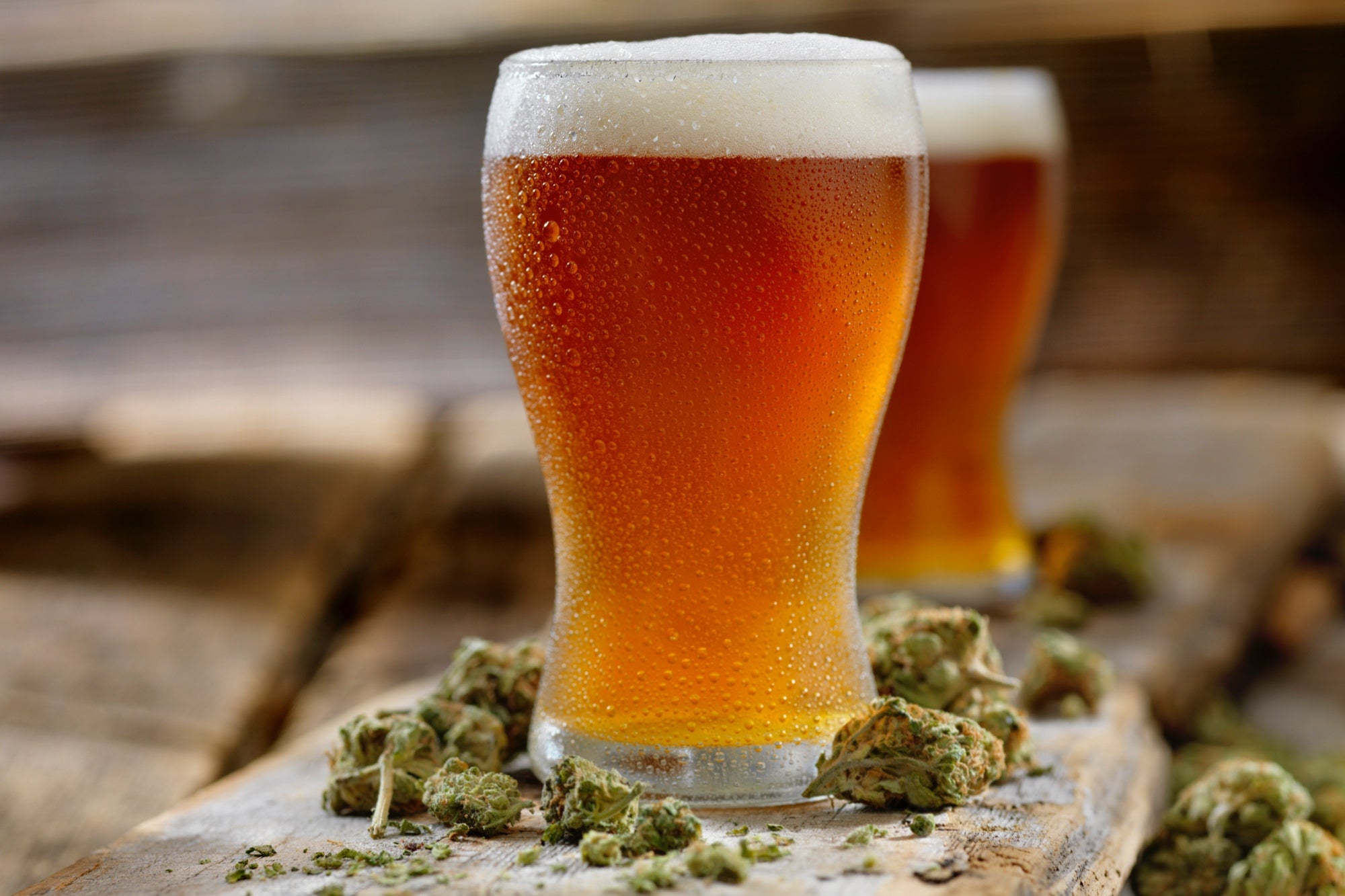 What happens when you mix weed and alcohol?

RELATED: Will Cannabis Be More Prominent Than Liquor In a Post-COVID World?

A clinical trial published in 2015 found that the test subjects had “significantly higher blood THC” levels when they used cannabis along with alcohol, and combining the two led to increased performance impairment.1

In that same study, the researchers found that the level of THC in plasma increased dose-dependently as the amount of alcohol increased. These findings mirror those of a 2001 trial, in which the subjects who consumed alcohol along with cannabis “reported more episodes of euphoria and had higher plasma THC levels.” 2

The researchers stated that the findings “suggest that ethanol may increase the absorption of THC resulting in an increase in the positive subjective mood effects of smoked marijuana and contributing to the popularity of this drug combination.”

But are the results different for more frequent cannabis users? A 2010 study found that consuming alcohol “slightly prolonged” the half-life of THC in the blood. At the same time, the study only used 19 subjects, and the researchers were cagey about drawing wider conclusions from their findings.3

Drink or smoke first: Does ‘weed before beer everything clear’ really matter?

Arguably, one doesn’t need to see any scientific data to know that the mixing of cannabis and alcohol is more common with younger cannabis users. In high school, there is rarely a house party where weed and alcohol are not shared freely, and the same goes for countless college keg parties. But much like the party adage “liquor before beer, everything clear – beer before liquor, never been sicker” does the order in which you consume cannabis and alcohol make a difference?

According to at least one study, it might. A study published in January 2021 found that when cannabis was used first, there was a tendency to consume less alcohol and more cannabis. The researchers stated that “using cannabis first within a co-use day was associated with lower daily alcohol consumption, but greater daily cannabis consumption.” They added that substance use ordering was not linked to consequences, but that the number of drinks consumed was a predictor of whether or not the person would be more likely to experience negative effects of drinking.4

Physical side effects of  mixing alcohol and weed

As anyone who has polished off a few beers and had to hurry off to the bathroom can tell you, alcohol is a diuretic. It is also a powerful intoxicant depending on the dose, and large doses can cause major behavior changes, inflammation, stress the liver, alter blood sugar levels and more. It can dehydrate you and cause side effects such as:

A dry mouth and increased thirst are also common side effects of cannabis, and taken together, the two substances can worsen the likelihood of dehydration. A shortage of fluids makes a severe hangover the next morning more likely, and dehydration can require medical treatment in severe cases.

Drunk driving, self-harm, and other risks

The physiological effects of mixing alcohol and cannabis perhaps aren’t the only cause for concern. A 2016 study used data from the 2005 and 2010 National Alcohol survey and found that simultaneous use “approximately doubled the odds of drunk driving, social consequences, and harms to self.” 5

2. having a physician recommend reduced drinking

3. feeling that drinking was hurting health

4. getting into an accident while drinking.

The researchers wrote in their conclusion that in states with legal cannabis, policymakers should consider requiring distributors to include warning labels about the risks of combining cannabis and alcohol on cannabis product packaging.

On the other hand, while a 2010 clinical trial found that combining alcohol and THC caused performance impairments in driving, the study also found that those people who combined the two were less likely to drive a longer distance while under the influence. So perhaps this shorter driving could help to mitigate some of the risk associated with co-consuming cannabis and alcohol. 6

In addition, while many people with substance abuse problems transition to cannabis as a safer alternative, there is some reason to believe it may have the opposite effect on those who abuse alcohol. A 2018 trial found that using cannabis 12 or more times a month while in treatment for Alcohol Use Disorder was “associated with increased rates of physical consequences attributed to alcohol use.” The researchers added that people in treatment for AUD might benefit from stopping or reducing their cannabis use. 7

Does the type of cannabis or alcohol make a difference?

Just like not all users are the same, not all cannabis products are created equally and not every type of booze has the same makeup. A 2021 study recruited 274 college students who frequently use cannabis and alcohol together and found – perhaps not surprisingly – that using multiple alcohol products along with cannabis was more likely to produce negative consequences than one type of alcohol with cannabis. 8 9

The researchers found that combining just beer with cannabis (flower or concentrate) was significantly less likely to produce negative consequences, which included hangover, nausea or vomiting, “injured self,” “drove car high,” “had a blackout,” “rude or aggressive” and “unwanted sex.”

They also found that negative consequences were not more likely to occur when multiple types of cannabis products were used with one type of alcohol and that using concentrates with alcohol was not more dangerous than flower.

When mixing alcohol and edibles, even more caution may be required. Edibles produce a high that can be more potent and unpredictable at times – even for seasoned cannabis users. In addition, because of the delayed onset, it can be hard to gauge the effects of the edible in real time while also consuming alcohol. Edibles can also produce a very strong body high that can be lethargic and overly relaxing – much like the effect of consuming a large amount of alcohol.

The safest advice is to not mix the two, but if you do, make sure to wait at least an hour or two for the edibles to kick in and only then consider a reasonable amount of alcohol. Even then, the combination can sneak up on you and driving while high and drunk increases the risk of an accident, even compared to cannabis alone and alcohol alone.10

CBD does not have the psychotropic effects of THC, so consuming it with alcohol does not include the risk that you will experience heightened levels of intoxication from the alcohol.

At the same time, CBD can have a relaxing, sedative effect, which could potentially be heightened if taking a depressant like alcohol.

It’s possible that consuming CBD along with alcohol could have a tempering effect. While a bit outdated, a 1979 study found that when six male and four female volunteers were given CBD and alcohol together, the combination “resulted in significantly lower blood alcohol levels compared to alcohol given alone.” 11

RELATED: This Canned Cocktail Entrepreneur Doubled Her Business in 2021. Here’s How.

Are cannabis and alcohol more dangerous for young people?

The research has shown that both cannabis and alcohol use at a younger age (during adolescence) can have significant negative and detrimental effects on brain development. According to a 2017 systematic review, adolescent cannabis users and alcohol users tend to perform more poorly on tasks requiring attention, and “have less brain volumes in many areas than non-users.” 12

The researchers state that a critical factor to determine is whether or not the differences between users and non-users were provoked by exposure to alcohol or if these issues were present beforehand.

What to consider when mixing cannabis and alcohol

Cannabis and alcohol intersect at countless get-togethers – and nights kicking back at home. If you are mixing the two, there are a number of considerations to keep in mind.

This can be easier said than done and both alcohol and marijuana can cloud your judgment, but the main way to avoid any regretful consequences is to simply not overdo it in the first place – whether you’re consuming cannabis and alcohol alone or together. THC and alcohol are known to have augmenting effects

Your tolerance can be affected by the potency of the alcohol and the cannabis used, so be mindful that not every mix may have the same effect. As much as possible, know what you’re drinking and which cannabis you’re using, and let this factor into how much you consume of both.

Alcohol can dehydrate you quite quickly, and if you haven’t had enough fluids, this can heighten the intoxicating effects of alcohol. Cannabis can also leave you with a dry mouth (“cottonmouth”) and make you feel parched. Taken together, alcohol and cannabis can compound these side effects of one another, so it is imperative that you stay hydrated if you are consuming alcohol or cannabis – together or on their own.

Have a designated driver

Even if you’ve only had one or two drinks your driving can be significantly impaired, a problem that is worsened by the fact that alcohol tends to make people more confident about their ability to drive. Cannabis on the other hand, can often make people more cautious or anxious about their driving, and can slow down reaction time and situational awareness. Simply put, neither substance should be consumed if you plan on driving, so make sure to have a designated driver take the keys if you’re going to mix the two and get a cross fade going.

Consuming too much alcohol can lead to all types of dangerous situations, especially if you are alone or with people you don’t know or trust (or both). In such situations, exercise caution and consume in moderation.  Combined with high doses of alcohol, cannabis can contribute to some memory loss (blacking out) typically associated with alcohol.

Pace yourself and know when to call it a night

Too much of a good thing can be a real bummer, even if the worst thing that happens is a bad hangover (or a bad “weedover”).  Luckily, this is easy to avoid by just knowing your limits and not overdoing it. If you’re going to use alcohol and cannabis together, we recommend starting low and going slow.