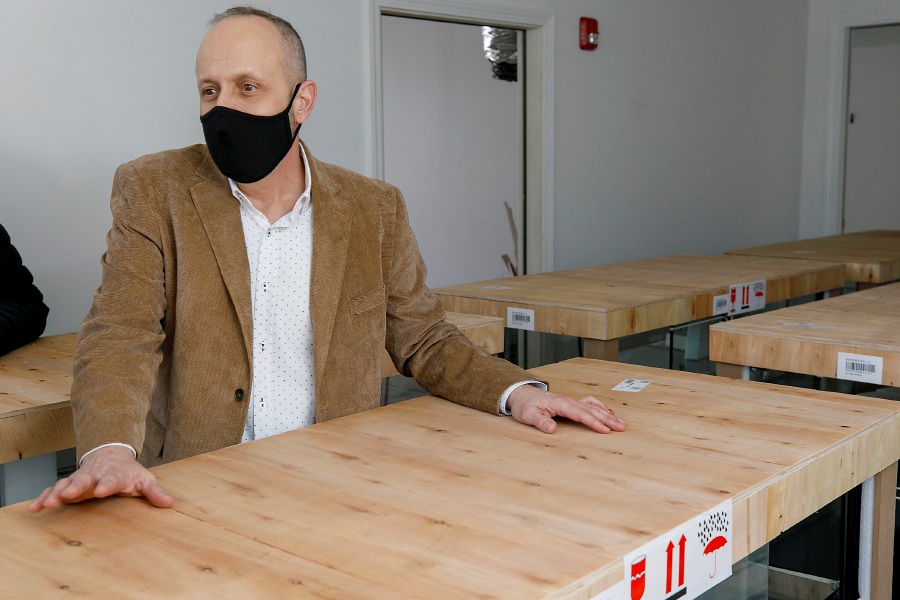 MERIDEN — Instead of rakes and lawn mower parts, the former Civali’s Hardware store at 1387 E. Main St. will become a health and wellness center with a doctor’s office, a hemp and CBD product shop, and a glass accessory shop.

The new plaza, which has yet to be named, is Tomarin Holdings LLC’s latest venture in the city. It is expected to open in several weeks.

“It’s really beautiful,” said Tomarin partner Rino Ferrarese. “It’s really exciting, new businesses, jobs. There is a body of water behind the property. We’re cleaning it up and putting in benches. We’re going to try to make it as nice as we can.”

The idea is to create a wellness destination and provide overflow parking for the Willow Brook medical marijuana dispensary next door. The small plaza is estimated to create about 25 new jobs.

In addition to Ferrarese, Tomarin Holdings also includes partners Mary Morgan and the late Thomas Schultz. Ferrarese is the chief operating officer and co-founder of CTPharma in Rocky Hill, one of the four licensed producers of medical cannabis in Connecticut. Morgan is the manager of Willow Brook medical marijuana dispensary at 1371 E. Main St.

Ferrarese is connected with a well-known leader in the state’s hemp industry. Luis Vega, a Meriden resident who was among the first 65 people in the state to get a license to grow hemp. Vega operates leased farms in Shelton, Monroe, and two other locations under the name Wepa! Farms and has been featured in Hemp Grower Magazine and Forbes.

“One of the things we’re excited about is having a hemp wellness center here at this location on East Main Street, next to the dispensary,” Vega said. “This is built up to be a destination.”

CBD stands for cannabidiol. It is the second most prevalent of the active ingredients of cannabis (marijuana), but does not include the psychoactive THC component. While CBD is an essential component of medical marijuana, it is derived directly from the hemp plant. A lesser-known cannabinoid called cannabigerol (CBG), while not present in large quantities in most strains, has shown promise in treating certain ailments, advocates said.

The Food and Drug Administration has approved one drug derived from cannabis and three synthetic drugs, but is working with companies to test other products, according to the FDA website.

As a member of the Connecticut Hemp Industry Association, Vega networked with other growers and manufacturers on ideas for businesses and products to retail in the plaza. The Hemp Wellness Center will feature a full line of hemp, CBD and CBG products, and proteins from Wepa! Farms and local manufacturers.

“In Connecticut, they require our product to match up with their product and it maintains that pharmaceutical model,” Vega said.  Wepa! Farms has both state and federal licenses.

Dr. Nicholas O’Brien APRN, PhD, will see patients at the center and can certify patients for a medical marijuana license for purchase at the dispensary. Gary Krol, will operate the glass accessory store.

“We appreciate the support for the young entrepreneurship that’s going on in Meriden,” Vega said. “Meriden makes you feel comfortable about doing business here.”

Tomarin initially purchased the property for the overflow parking but decided to renovate the building, and include a medical doctor’s practice on site, Ferrarese said. After talking to Vega, they added the hemp and CBD store and glass shop. About 200 square foot of space is left for another user to complement the other three businesses.

Construction was delayed about three months because of the pandemic, said general contractor Andrew Simonow.

“This additional new business activity on East Main Street is very encouraging – especially in the midst of the pandemic,” Ford stated in an email. “Just as encouraging is Luis Vega’s commitment to the city of Meriden.  As a resident and business owner, he has illustrated that commitment in the time he’s been involved with the Midstate Chamber of Commerce and through his activity with our HOLA (Hispanic Outreach Leaders in Action) Committee.  We wish him the very best with this expansion of his business.”

As state lawmakers debate Gov. Ned Lamont’s proposal to allow for recreational marijuana, Ferrarese doesn’t see any future changes for Willow Brook. The current space is too small for a recreational retail operation. Ferrarese said should the laws change, he hopes the state continues to preserve the medical aspect of the cannabis industry.

For his part, Vega will expand his operation to include recreational marijuana growing, he said.

The General Assembly’s Judiciary Committee is scheduled to hold a hearing on Lamont’s proposed legalization bill.

The bill addresses the broad topic of social equity — who should benefit from the new industry, including communities disproportionately impacted by criminal marijuana laws — but it also defers many questions to an Equity Commission that could make recommendations before the start date in 2022.

The governor’s bill would also create licenses for entry-level portions of the business that would require relatively little capital: micro-cultivator, food and beverage manufacturer, and delivery. Those licenses could be limited to so-called social equity applicants.