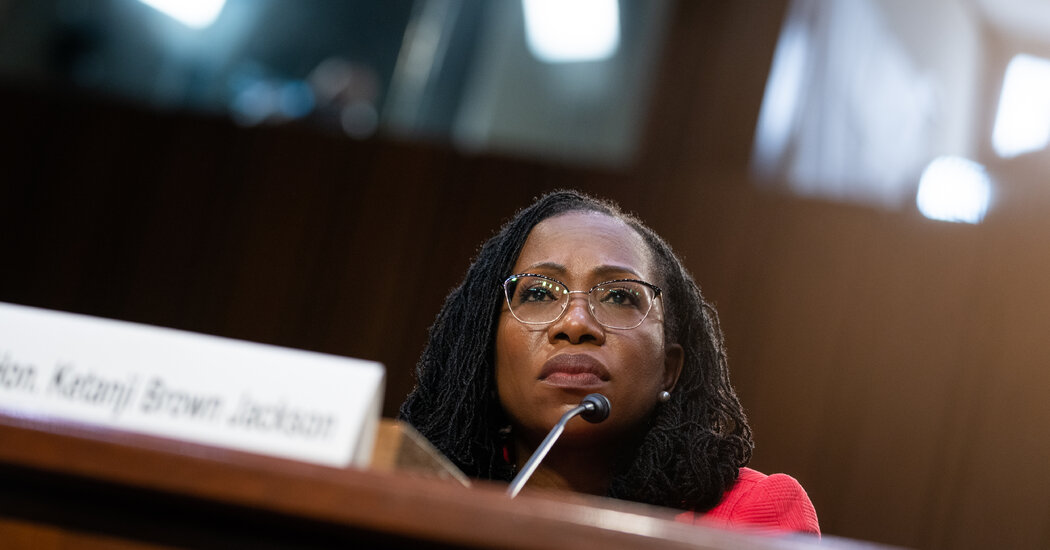 The reasons Republicans gave for opposing Solicitor General Kagan were standard fare. They portrayed her as a closet political activist who, in the words of Senator Charles Grassley of Iowa, had failed to provide assurance that she would “change her political ways or check her political instincts or goals at the courthouse door.” One of her home-state senators, Scott Brown, Republican of Massachusetts, who had introduced her at the committee hearing and was widely expected to vote for her, voted no at the last minute, having apparently discovered that she lacked judicial experience.

While the opposition was tedious and vapid, it wasn’t mean. No one accused her of coddling pedophiles or terrorists. The senators were following their leader. It was just business.

The difference between then and now is stark. The alternating question periods between Democratic and Republican senators induced a kind of whiplash. While the Democrats celebrated Judge Jackson’s accomplishments and the symbolism of her nomination, the Republicans oozed venom. Their collective fixation on her irrefutably mainstream sentencing practices in cases involving child sexual abuse imagery — a topic seemingly plucked from thin air because there was nothing of substance for them to complain about — verged on the unhinged.

“Every judge who does what you are doing is making it easier for the children to be exploited,” Senator Graham exclaimed, evidently overcome with remorse for having voted less than a year ago to confirm her to the federal appeals court on which she now sits.

It was inevitable that some Republican would bring up the mother of all confirmation battles, the defeat of President Ronald Reagan’s nomination of Judge Robert Bork in 1987. It turned out to be Senator Cruz. “It is only one side of the aisle, the Democratic aisle, that went so into the gutter with Judge Robert Bork that they invented a new verb, to ‘bork’ someone,” he said.

If Senator Cruz meant to justify himself and his fellow Republicans for “borking” Judge Jackson, he missed a crucial difference. In 1987, six Republicans joined with all but two Democrats to reject the Bork nomination for what the nominee had said and written. Judge Bork actually criticized a key measure of the Civil Rights Act of 1964, which he said embodied a principle of “unsurpassed ugliness.” He really did believe that the First Amendment protected only pure political speech and not other means of expression. He called the Supreme Court’s 1965 decision in Griswold v. Connecticut, which recognized a constitutional right to contraception, an “unprincipled” judicial overreach. That he would vote to repudiate Roe v. Wade when the opportunity arose was a given.

In other words, the Bork hearing was really about Robert Bork and what impact he would have on the Supreme Court if confirmed to what was then the swing seat. The Republicans’ role in the Jackson hearing was not remotely about Ketanji Brown Jackson. It was about concocting a scary version of a Black woman to serve up to their base. In addition to associating her with crime and criminals, they repeatedly questioned her representation of Guantánamo detainees.