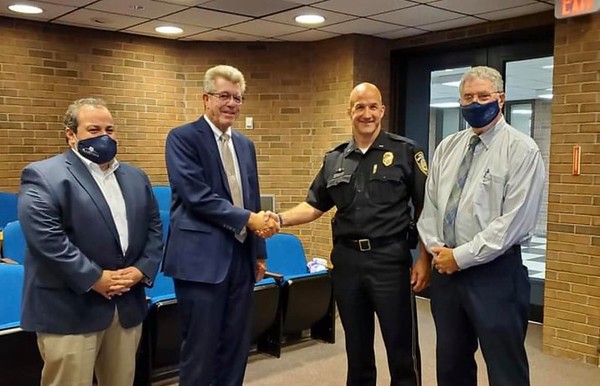 Peterson, who was appointed to the interim chief position last Thursday, said his goals are to train officers on body cameras, getting the department fully staffed, working with the town council on the town’s marijuana policy and increasing patrols to better prevent car thefts and break-ins.

Peterson said the police department has been outfitted with body cameras for the past three months. A state grant covered 30% of the costs.

“We will begin training in two weeks,” Peterson said. “By October, they will be fully implemented. The Police Accountability bill mandates that police departments accomplish this by July of next year.”

Another priority for Peterson is to get the Plainville Police Department fully staffed.

“We’re looking to do quite a bit of hiring,” Peterson said. “We just recently brought Kelsey O’Donnell, who was a police officer in Waterbury, on-board as a patrol officer. To get fully staffed, we have to bring in two more people and we’re in that process now. We’re continuing to do a background investigation for the possible candidates.”

Peterson said it takes approximately a year to bring in a new officer, which includes six months of academy training and three months of field training.

“We’re a 40 person department, so when someone retires we feel that,” Peterson said. “I will be working with the town manager (Robert Lee) over the next year to come up with a plan that allows us to stay fully staffed by planning ahead and hiring in advance.”

The recent legalization of recreational marijuana in Connecticut has raised questions about where the town will allow it to be smoked. Peterson will be participating in workshops with the town council as they work to determine local policy.

“The decision is in the council’s hands, but I don’t mind saying that I don’t think we should allow people to smoke marijuana in town parks,” he said. “Right now, if you go to Norton Park and you’re pushing your child on a swing, there’s nothing to tell people they can’t stand next to them and smoke.”

Peterson is also in the process of pursuing a $30,000 state grant to allow the local police department to step up their patrol efforts.

“Car thefts and break-ins continue to climb,” he said. “If we can secure this grant, it would be a big help. Both Farmington and Southington have their own task forces to address these issues. If we can get this grant, we can do the same.”