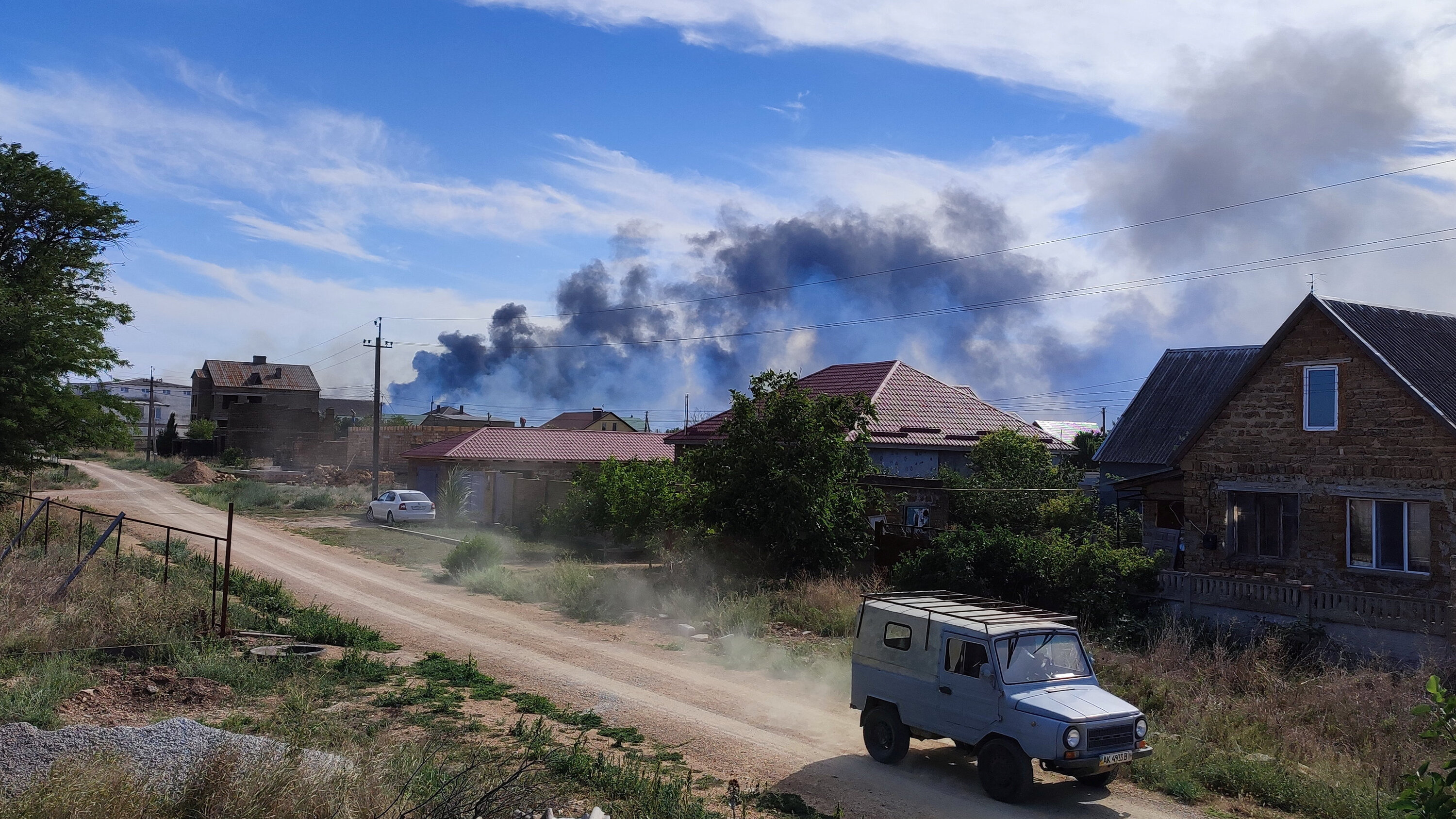 videoUkraine claimed responsibility for a rare attack on a Russian airbase in the occupied Crimean peninsula.creditCredit…Reuters

ODESSA, Ukraine — A series of explosions rocked a key Russian air base on the Kremlin-held Crimea peninsula on Tuesday, sending up huge plumes of smoke, killing at least one person and leaving local officials confused about exactly what had happened.

As Russian and occupation officials scrambled to determine the cause, raising the terror threat level in the area, a senior Ukrainian military official with knowledge of the situation said Ukrainian forces were behind the blast in the Saki Air Base on the western coast of Crimea.

“This was an air base from which planes regularly took off for strikes against our forces in the southern theater,” the official said, speaking on condition of anonymity to discuss sensitive military matters. The official did not reveal the type of weapon used in the attack, saying only that “an exclusively Ukrainian-made device was used.”

A Ukrainian attack on Russian forces in Crimea would represent a significant expansion of Ukraine’s offensive efforts, which have so far been largely limited to driving Russian troops away from territories occupied after February 24, when the invasion began.

It would also be an embarrassment to Russian President Vladimir V. Putin, who often speaks of Crimea, which he illegally annexed from Ukraine in 2014, as if it were holy ground.

Ukraine has few weapons that could reach the peninsula, other than aircraft that would be at risk of being immediately shot down by Russia’s strong air defenses in the region. The airbase, which is located near the town of Novofederivka, is nearly 200 miles from the nearest Ukrainian military position.

Videos verified and reviewed by the New York Times show a plume of smoke rising from the air base just before the explosions. There were at least three explosions: two in quick succession and a third a few moments later. It is not clear from the videos what caused the explosions. Additionally, a video posted on social media shows at least one warplane, a Su-24M, completely destroyed on the base’s tarmac.

The senior Ukrainian official said the attack involved partisan resistance forces loyal to the Kyiv government, but did not say whether those forces carried out the attack or helped regular Ukrainian military units target at the base, as has sometimes happened in other places occupied by Russia. territories

Publicly, Ukrainian officials on Tuesday did not confirm the involvement of the Ukrainian military. Ukraine’s defense ministry said in a statement that it could not “determine the cause of the explosion” and suggested that staff at the base adhere to no-smoking rules.

Other officials did not exactly deny that Ukraine was behind the blast.

“The future of Crimea is to be a pearl of the Black Sea, a national park with unique nature and a world tourist spot, not a military base for terrorists,” said Mykhailo Podolyak, a senior adviser to Ukrainian President Volodymyr Zelensky. a tweet “It’s just the beginning.”

Russia’s Defense Ministry said in a statement that the explosion was caused by the detonation of munitions stored for warplanes at the base. While the ministry offered no speculation on whether Ukrainian forces might have been involved, the decision by Crimea’s Kremlin-installed leader, Sergei Aksyonov, to raise the terror threat level to yellow suggested that the officials were concerned about security on the peninsula.

“This measure is purely prophylactic, because the situation in the region is under full control,” Aksyonov said in a statement on Telegram.

In the eight years of Russia’s occupation of Crimea, the peninsula has been transformed from a quiet beach destination in southern Ukraine to a major base of military operations. Saki Air Base is home to Russia’s separate 43rd Naval Strike Regiment, which is part of the Black Sea Fleet. Ukraine’s military intelligence service has accused the regiment’s pilots of committing war crimes by bombing civilian areas during the war.

Shortly after the explosion, Mr. Aksyonov arrived at the scene. Standing in front of a large plume of black smoke, he said a three-mile perimeter had been erected around the base site to protect residents.

“Unfortunately, one person died,” he said. “I express my deepest condolences to the family and friends.” Crimea’s health ministry said at least nine people had been injured.

Christiaan Triebert contributed to the report.