At least eight people have been killed, including a senior militant, as a result of Israeli airstrikes, Palestinian officials said.

An explosion was heard in Gaza City on Friday and smoke was seen rising from the seventh floor of a tall building.

The palestinian The health ministry said 40 people were injured, with a senior Islamic Jihad commander and a five-year-old boy among the dead.

The strike comes after days of tensions following the arrest of a senior militant in the occupied West Bank on Monday.

Israel had roads closed all around Gaza earlier this week and sent reinforcements to the border in anticipation of retaliation.

“The IDF (Israeli Defense League) is currently attacking the Gaza Strip. A special situation has been declared on the Israeli home front,” the Israeli military said in a statement.

Hamas spokesman Fawzi Barhoum said that “the Israeli enemy, who started the escalation against Gaza and committed a new crime, must pay the price and take full responsibility.” 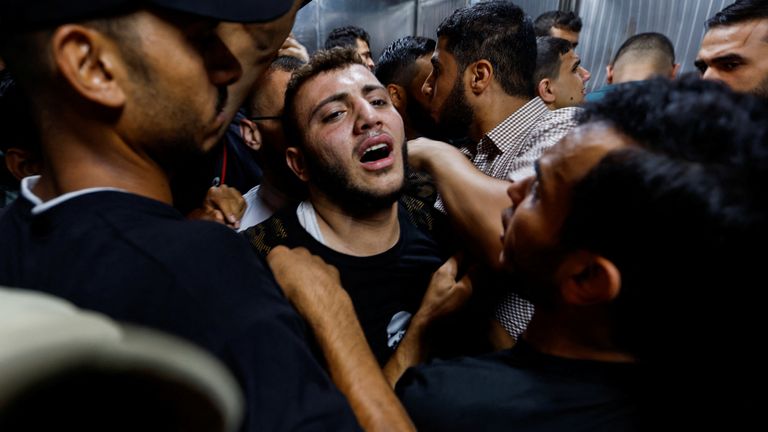 Image:
Palestinians react at a hospital after Israeli attacks in Gaza City

“There are no red lines in this battle and Tel Aviv will fall under the rockets of the resistance, as well as all Israeli cities,” he said.

Read more on Sky News:
“All civilian casualties are tragic”
Crisis management rather than peace talks

Israeli Defense Minister Benny Gantz visited communities near Gaza earlier Friday, saying authorities were preparing “actions that will eliminate the threat from this region,” without elaborating.

“We will act with internal resilience and external strength to restore routine life in southern Israel,” he said.

“We do not seek conflict, but we will not hesitate to defend our citizens, if necessary.”

The PIJ is smaller than Hamas, but shares a similar ideology, with both groups opposed to Israel’s presence.