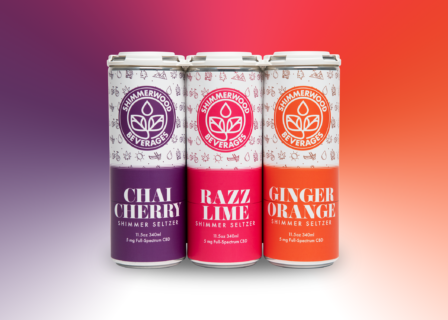 Announced for immediate availability Shimmerwood Beverages introduces its fourth CBD seltzer flavor, Chai Cherry. Chai Cherry combines the warmth of Chai with the woodsy flavor of cherry bitters. To round out the mysterious spiced flavor Chai Cherry includes chaga, a mushroom native to cold climates. Somewhat bitter and savory, this fungi blends seamlessly with the chai spices. Enjoyed cold from the can or as a mocktail or cocktail mixer, Shimmerwood Beverages Chai Cherry is a refreshing effervescent CBD seltzer. “We wanted to introduce a flavor that matched the holiday season. The unique mix of chai, chaga and cherry is a great match and something that lends itself to being very mixable with a variety of spirits” said Tibor Mascari VP Product Development.

Shimmerwood Beverages also announced they are now shipping to New Jersey and Virginia. “Expanding coverage down the east coast has been one of our business plan goals from day one. This expansion allows customers in New Jersey and Virginia, as well as our existing markets, to order our 5mg Full Spectrum CBD Seltzer from the comfort of their homes.” Said Shimmerwood VP of Marketing, Josh Ahadian. With the addition of New Jersey and Virginia, Shimmerwood Beverages is now shipping to eight states including Maine, Vermont, Rhode Island, Connecticut, New York and Florida. Shimmer Seltzer is also available through retail locations in Connecticut, Maine, Rhode Island and Vermont.