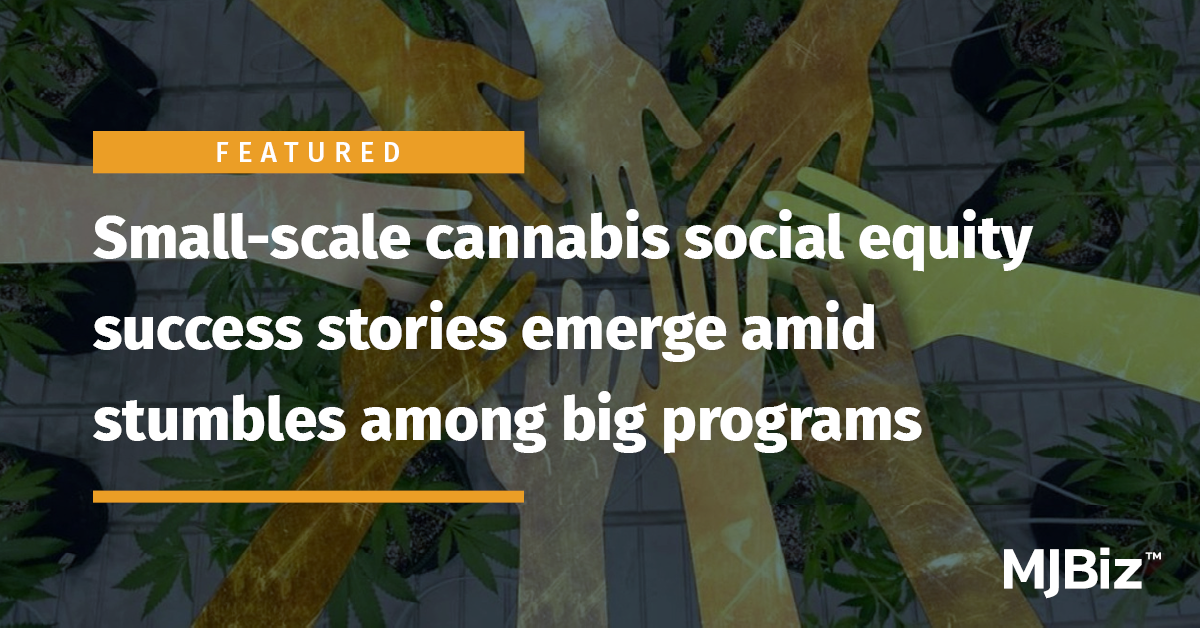 Many of the success stories appear to involve minority entrepreneurs who have become equity activists or formed incubators to help others get the know-how and capital needed to break in.

“They (the entrepreneur-activists) are fighting for every dollar to be invested in social equity,” said Amber Littlejohn, executive director of the Minority Cannabis Business Association (MCBA).

“These are people who are standing up and fighting for the community, in spite of running businesses” of their own, some of which are still struggling.

The association recently conducted a sweeping and critical study of equity programs across the U.S. that showed state programs have yet to fulfill the promise of boosting cannabis industry participation among minorities and those affected by the war on drugs.

But in general, he stressed, it’s important to go beyond the negative headlines to “celebrate the people who did get in,” while also recognizing that a sea change has occurred.

“When I first got started in the industry, social equity wasn’t even a term being used. There was no discussion of it at the table,” Horton said.

Today, he noted, social equity, diversity and inclusion are at least an essential part of any legalization discussion.

“Without a doubt, it’s something we need to recognize and understand the importance of and realize it has come a long way.”

Change also is occurring among some marijuana multistate operators, which critics charge with curbing opportunities for minority entrepreneurs by supporting limited-license markets.

In certain cases, MSOs are giving back to communities they operate in and providing resources to help social equity applicants break into the market.

But minority entrepreneurs and minority-led incubators appear to be leading the way in equity efforts, sometimes with strong support from municipalities.

Blunt, who served years of probation after being arrested in 2004 for possession with intent to sell marijuana, has become a role model for how someone who was a casualty of the war on drugs can become successful in the cannabis industry.

The annual Women & Minorities in the Cannabis Industry Report breaks down the current state of social equity and lack of diversity in executive roles across the industry as more states legalize cannabis, including:

“All of this work is difficult,” Horton said. “But Tucky Blunt, he’s making a lot of progress. He’s definitely waving the flag high.”

Littlejohn cited Amber Senter, CEO of Makr House, an Oakland infused cannabis processor and distributor, and executive director of Supernova Women in Oakland, a group formed in 2015 to empower people of color in the cannabis industry.

And Senter played a role in the California Cannabis Social Equity Act of 2018 and Oakland’s cannabis equity program.

“Who else can say that? Nobody.”

In December, Senter received approval from the San Francisco Planning Commission to open a marijuana store and is now going through the building permitting process.

“I became an advocate for my community out of necessity to create space for myself and my Black colleagues to operate,” Senter wrote in an email to MJBizDaily.

“I believe in liberation for all Black people and prioritizing the communities damaged by the war on drugs to have precedence in the cannabis economy.”

Littlejohn described Senter as “an extraordinary leader in a tough market.”

Los Angeles has been criticized for delays and allegedly mismanaging its social equity program, issuing licenses only last summer.

She also formed the Life Development Group to educate the community on cannabis regulations as well as the Social Equity Owners and Workers Association to advocate for fair and equitable equity policies.

“Those folks are incredible leaders,” Littlejohn said of Keith’s group, “and they’re doing it in the face of really significant adversity.”

In the Pacific Northwest, Horton’s wife, Jeannette Ward Horton, co-founded the NuLeaf Project in partnership with the city of Portland to provide minority entrepreneurs with financial resources and access to mentors and other resources.

Grants, which typically range from $15,000 to $60,000, and zero-interest loans have boosted cannabis retailers, craft producers and delivery services.

The NuLeaf Project to date has issued more than $1 million to 32 businesses, according to its website.

In Michigan, the Detroit Metro-Times recently gave a shout-out to 20 Black-owned cannabis companies based in the state.

One was Calyxeum, a Detroit-based grower and wholesaler of edibles, flower, concentrates and topicals.

Its co-founders are Rebecca Colett, who has a master’s in business administration, and Latoyia Rucker, a master gardener with a bachelor’s degree in biology and a master’s in education.

“We thought if anyone could raise money, it would be us,” Colett, Calyxeum’s CEO, told MJBizDaily.

But “Oh, man, it’s been extremely challenging, even though I have a background in finance and tech and crowdfunding and SEC regulations, and my partner (Latoyia) has an intense background in science.”

As a result, they have taken a staged approach, “kind of bootstrapping if you will,” Colett said, going from a caregiver to a licensed operator in 2019 with a grow and processing facility that today totals 15,000 square feet.

The next goal is to raise $250,000 for expansion through crowdfunding and without help from equity programs.

At the same time, Colett and Rucker are active in developing the next round of minority cannabis entrepreneurs.

Colett said she noticed a lack of technical and financial knowledge, so she partnered with the city to create the Detroit Cannabis Project a little more than a year ago to provide training and mentoring to social equity applicants.

So far, close to 300 social equity applicants have gone through the training, which includes weekly webinars on “everything from operations to marketing to compliance.”

The webinars even include advice on what’s permissible for social media posts, “so you don’t get your accounts shut down,” she said.

Colett said there never was a question of whether to be an activist.

“You’ve got to be an activist, especially in a community like Detroit, where there’s lots of churches, zoning is very restrictive.

“In order to be successful, you have to do a lot of education with the community and local politicians.”