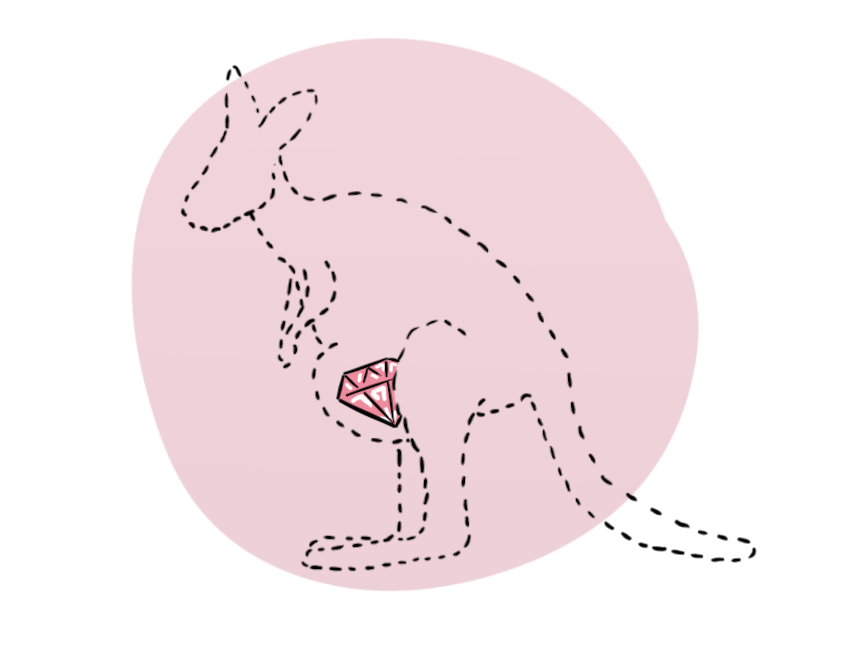 When George Clooney and Brad Pitt pull off an elaborate heist in the movies, sharp suits, charisma and some high-tech wizardry are order of the day.

The thieves in the Argyle diamond heist in the Kimberley of Western Australia may not have been as sophisticated as the cast of Ocean’s Eleven, but they were audacious.

They stole up to $50 million of diamonds right under the nose of the mine’s owners in the late 1980s, including the famous fairy floss pinks.

When making the ABC’s Pink Diamond Heist podcast we discovered there was actually an expert that examined what makes the perfect heist.

United States security expert Jarret Lafleur has crunched the data and found that the world’s most audacious heists had some key ingredients.

And lo and behold our Argyle heist has some of the key elements.

In keeping with the caper of the podcast, our resident cartoonist has re-imagined the six different heists, and given them a very special pink-roo twist.

Snap on your catsuit and take a journey through the world’s ultimate heists.

A type of heist known as a stealth raid.(ABC News: Kemii Maguire)

The Antwerp diamond heist was one of the largest robberies in history and it happened in one of the most fortified businesses in the world – the Antwerp Diamond Centre.

What the thieves pulled off on the Valentine’s Day weekend in Belgium in 2003 was of Mission Impossible proportions.

They hacked into multiple security mechanisms including a lock with 100 million possible combinations.

“The thieves, in this case, executed what I called a stealth raid, where they broke into a facility over a holiday weekend,” Jarret Lafleur said. Surprisingly low-tech methods have been used in heists such as stealth raids.(ABC News: Kemii Maguire)

“The mastermind of that heist, as far as we know, planted himself in the facility two years in advance of the heist, to gather the information he needed to actually execute [it].”

Jarret Lafleur works for the United States government in the security lab Sandia National Labs and co-authored the study The Perfect Heist: Recipes from Around the World.

The reason to study high-stake heists was to see what they could learn about protecting US government assets from attack. Jarret said the Antwerp thieves made off with up to $600 million in cash, gold and diamonds but some of their methods were surprisingly low-tech.

“In order to disable the motion sensor, it was hairspray and a styrofoam block,” Jarret said. It was a regular day on the casino floor for Stardust Casino croupier William Brennan.

Instead of taking a lunch break, he exited the building in plain sight.

Wearing a backpack of cash and chips worth $US800,000, he passed the security guards on his way out.

“I understand he stopped by his apartment to pick up his cat before he left.” The theft at the Stardust Casino in the US in 1992 was an example of a walk away heist.(ABC News: Kemii Maguire)

William Brennan may have been the ultimate cat burglar riding off into the Las Vegas sunset with his feline companion, but Jarret said his was a well-executed crime.

“Some of the top lessons learned that I learned as a result of this report, and that we highlight in the report, are that often the ways that you get into a facility, they’re not particularly high tech,” he said. 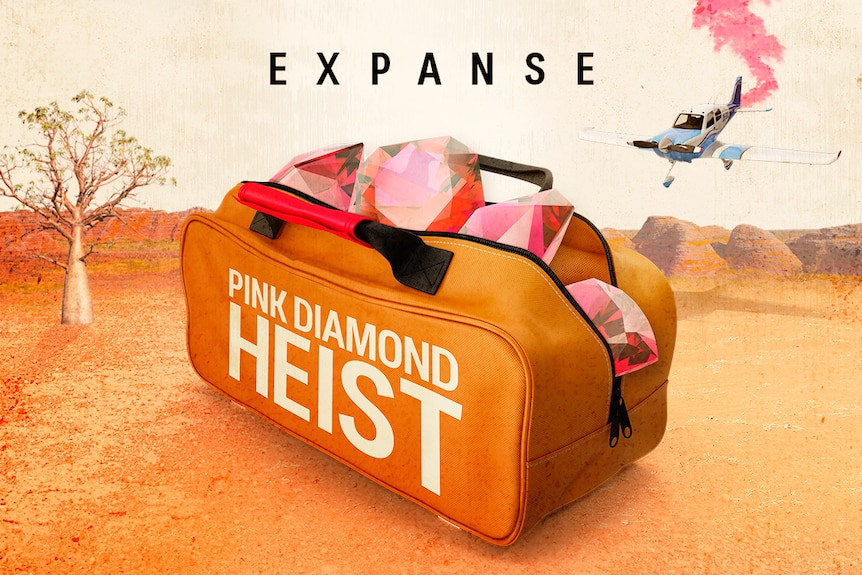 In all my years of journalism, there is one story that’s stuck with me.

Space to play or pause, M to mute, left and right arrows to seek, up and down arrows for volume.

“They don’t have to be high-tech, often you just need to find the right combination of low-tech measures to get you into the facility, and get you the goods that you’re looking to steal.”

It was an insider that was also instrumental in the Argyle diamond heist in the late 1980s/early 1990s at the mine in WA’s Kimberley.

Argyle security officer Barry Crimmins pocketed diamonds from the mine, including the famous Argyle pinks, in cahoots with Perth horse trainer Lindsay Roddan.

The stolen gems were then sold into the famous diamond trading centres of Antwerp and Geneva. Some of the stolen pink diamonds that were recovered.(Supplied: WA Police/John Watling)

Richard Corfield was in charge of security for all of Argyle’s operations, including the mine.

He said he was shocked when they finally worked out the diamond heist was an inside job.

“Barry was recruited as a security guard and then he was made up to superintendent,” he said.

“I agreed to it … later on, we find out how wrong we had been.

“He was that good, a really clever criminal.” A category of heist known as a smash and grab.(ABC News: Kemii Maguire)

Employing violence towards property rather than people, thieves seize valuables by relying on the delay between theft detection and security force response.

When you think of a daring heist, Hollywood has programmed us to imagine thieves landing via helicopter on a roof, stealthily lowering themselves down a pyramid skylight to a basement vault, emptying it and disappearing into the night.

The crooks involved in the Vastberga Helicopter Heist of 2009 obviously read the same script.

“There was one [heist] in Sweden [Vastberga] involving a helicopter, where criminals landed on top of the building … and broke into the facility while there were people still working in the facility,” Jarret said.

“But you know, in my book, if you’re a criminal, you probably don’t want to have to do that.” Smash and grabs are perhaps what you imagine to be the quintessential heist, but not so for thieves, say security analysts.(ABC News: Kemii Maguire) Via violent means, individuals and/or security systems are controlled or incapacitated prior to the seizure of valuables.

Then there are the heists that rope innocent bystanders into the robbery.

One of the most notorious was the robbery at the Brink’s-Mat security depot near Heathrow airport in London in 1983.

A gang of armed men entered the warehouse with the help of a security guard at dawn. Once inside they poured petrol over the staff and threatened them with a lit match if they did not reveal the combination of the vault.

“In many cases like Brink’s-Mat, these were people who were coerced in real time during the robbery, and enforced to help,” Jarret said.

The thieves got away with £26 million worth of gold bullion, diamonds and cash from the depot near Heathrow.

Scotland Yard eventually tracked the thieves down but most of the gold was never recovered. Art worth $US440 million was stolen from a museum in a deceive, subdue and seize heist.(ABC News: Kemii Maguire)

A subdue and seize event preceded by a deception or diversion, typically permitting the thieves access that they would not normally have.

Almost all high-value robberies involve deception, according to Jarret Lafleur.

The Isabella Stewart Gardner Museum art heist in 1990 was no exception.

They claimed to be responding to a disturbance and convinced security to let them in.

The phoney officers handcuffed the security guards, wrapped duct tape around their eyes and mouths and left them in the basement. A list of motion alarms from the night of the art heist.(Supplied: Isabella Stewart Gardner Museum, Boston)

The crime remains unsolved despite a $US10 million reward for any information that leads to the safe return of the works.

Museum staff told the ABC its commitment to resolving the crime had never diminished.

“The Gardner Museum’s investigation, in coordination with the FBI, is active and ongoing.

“We remain optimistic for the recovery of the objects and the return to their rightful place — on view in the galleries of the Isabella Stewart Gardner Museum for the public to enjoy.” One of the stolen works is The Concert by Johannes Vermeer, from about 1665.(Supplied: Isabella Stewart Gardner Museum, Boston) Another is Rembrandt van Rijn’s Christ in the Storm on the Sea of Galilee (1633).(Supplied: Isabella Stewart Gardner Museum, Boston) A type of heist known as a tiger kidnapping.(ABC News: Kemii Maguire)

A subdue and seize event preceded by a kidnapping, typically of an individual with access and his family, coercing a person with access the thieves need to act as an insider.

Just as a tiger stalks its prey before it strikes, so do some of the criminals behind some of the world’s most notorious heists.

Tiger kidnappings were adapted from Irish Republican Army (IRA) tactics in the 1970s.

The gang behind the Northern Bank heist employed this strategy in 2004 when they abducted family members of two bank officials.

The thieves made off with £26.5 million from the bank’s vault in central Belfast. An artist’s impression of a tiger kidnapping.(ABC News: Kemii Maguire)

Jarret Lafleur said despite the fact that most of perpetrators of the heists he studied were caught, it wasn’t because of a lack of planning.

“Valerio Viccei, who is the mastermind of the Knightsbridge safe deposit centre heist, once said, ‘It’s like a big challenge, like the Olympic Games,'” Jarret said.

“So I think there’s a lot in that quote. That is really interesting, right?

“When he says here, ‘It’s like a big challenge, you’ve trained for a good part of your life, you’ve gone through your initial criminal career, and now you’re at … the top of your game, going after these big targets’, in that process, you’ve probably learned a lot.” Jarret Lafleur said the US government wanted to crunch the data on high-value heists to see what it could learn about protecting valuable government assets.

But as he found out, almost all daring heists share a key ingredient: insiders.

“I was a small Latin scholar, and there was a great quote in Latin, which was quis custodiet ipsos custodes, which basically says, ‘Who watches the watchers?’ or ‘Who will watch the watchers?’