Just weeks after Connecticut Gov. Ned Lamont (D) signed a marijuana legalization bill into law, the state’s newly formed Social Equity Council met for the first time on Thursday to discuss its approach to fostering a diverse, equitable cannabis industry that benefits those most harmed by the war on drugs.

Among other agenda items, the 15-person group approved a list of geographic areas disproportionately impacted by the drug war, which will be used to determine eligibility for social equity business licenses. Under the state’s new cannabis law, half of all licenses must go to equity applicants, who may also qualify for lower licensing fees, technical assistance, workforce training and funding to cover startup costs.

A portion of tax revenue from the eventual sale of legal cannabis—expected to begin sometime next year—is also set to be reinvested into communities in the affected areas.

A cornerstone of CT’s legalization of adult-use cannabis is the Social Equity Council.

This talented group — who met today for the first time — will break down barriers for a lot of Black & Brown folks who have traditionally, and unfairly, not been given a seat at the table. pic.twitter.com/sTB0XAstRu

The impacted areas were determined through historical drug-related conviction rates and unemployment rates among U.S. Census tracts in the state. The 200 qualifying Census tracts across the state span 35 cities and towns. Together they account for about 23 percent of the state’s current population, noted local reporter John Craven, but are responsible for more than two-thirds of past cannabis convictions.

The tracts include sections of big cities with larger Black and brown populations, who have disproportionately borne the brunt of the war on drugs nationally, as well as towns that have smaller communities of color but higher unemployment rates. 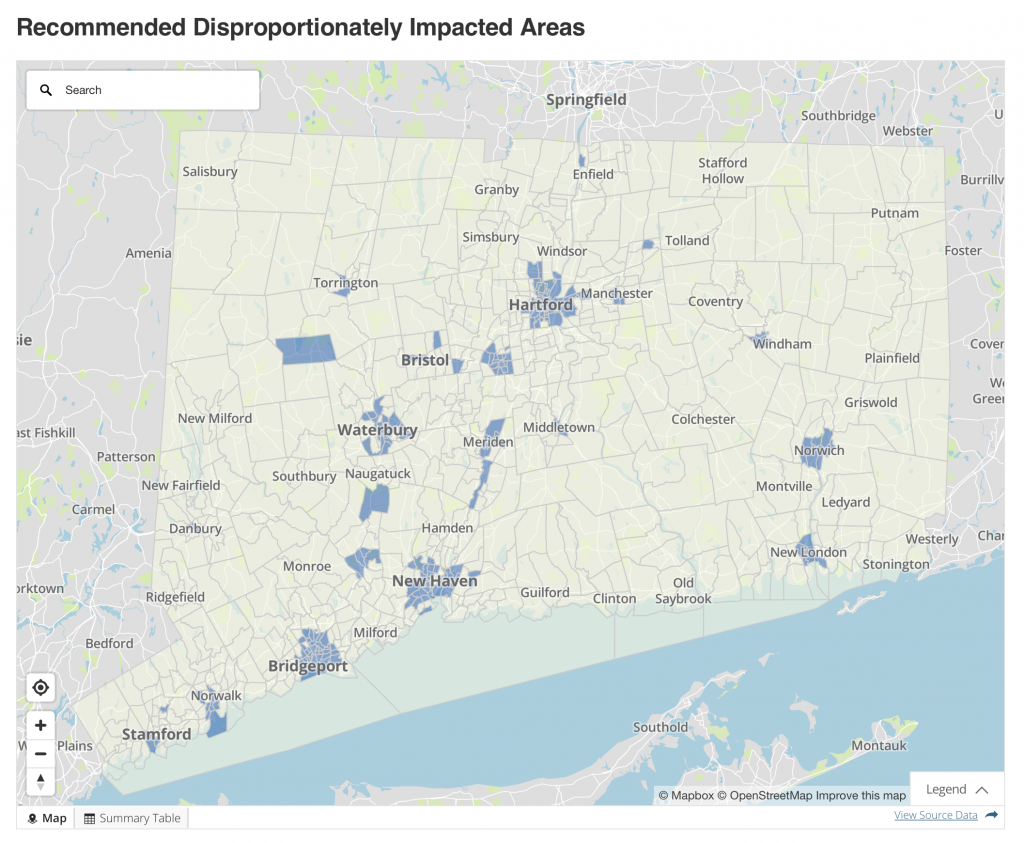 The Social Equity Council was initially supposed to adopt the list of areas over the weekend, but the action didn’t happen until Thursday. At the meeting, the council also pushed back a separate deadline related to selecting an independent third party to prepare a report on the historical and present-day consequences of cannabis policy.

The council was supposed to move forward on that selection process within 45 days of the cannabis legalization bill becoming law, but members delayed that deadline until mid-September.

State Treasurer Shawn Wooden (D) acknowledged at Thursday’s meeting that while there’s still controversy around legalization, “we’re here now, and the objective now is to get it right.”

“Let’s be honest, folks, the war on drugs failed. And it did more than fail: It harmed [and] incarcerated generations of predominantly Black and brown people,” Wooden said. “As someone…born and raised from a community in which I saw it, and how it ravaged a community, I saw how ineffective the policies the policies of the past were.”

HAPPENING NOW: The Social Equity Council, which was established by the recent enactment of legislation on adult-use cannabis, is holding its first meeting.

?Learn more about the council: https://t.co/aqugJLUFMa

Jason Ortiz, executive director of Students for Sensible Drug Policy and a member of a legalization working group assembled by Lamont that last year issued recommendations on social equity, described the meeting as a positive step but stressed that there’s far more work to be done.

“It’s exciting to see a cannabis equity-focused board form in Connecticut,” Ortiz told Marijuana Moment. “That alone is a huge step forward and serves as a positive example that public pressure can create structures for justice. Now it’s on all of us to hold their feet to the fire to ensure the implementation matches the stated goals of ensuring our most impacted communities benefit the most from legalization.”

Other elements of the Connecticut’s new marijuana system are also coming together. Last month the state launched a website with up-to-date information about what’s legal and what isn’t. While retail sales have yet to begin, for instance, other changes took effect immediately. Adults 21 and older, for example, are free to possess up to 1.5 ounces of cannabis. And beginning in July 2022, individuals with past cannabis convictions will be able to ask state courts to erase those convictions.

Homegrow also takes a phased-in approach. Medical patients will be able to cultivate cannabis at home in Connecticut beginning in July 2022, but adults won’t be allowed to grow for personal use until a full year later.

Virginia regulators similarly launched a web page in June that breaks down the various provisions of the adult-use legalization law that was enacted in April and also took effect on July 1. New Mexico and New York, meanwhile, also launched websites this year to detail the provisions of their new cannabis programs.

In Connecticut, officials recently updated their revenue projections for the legal marijuana market over its first five years. The state Office of Fiscal Analysis said that the state could earn $4.1 million in state and local taxes for the 2022 fiscal year, which would rise to $73.4 million by fiscal 2026.