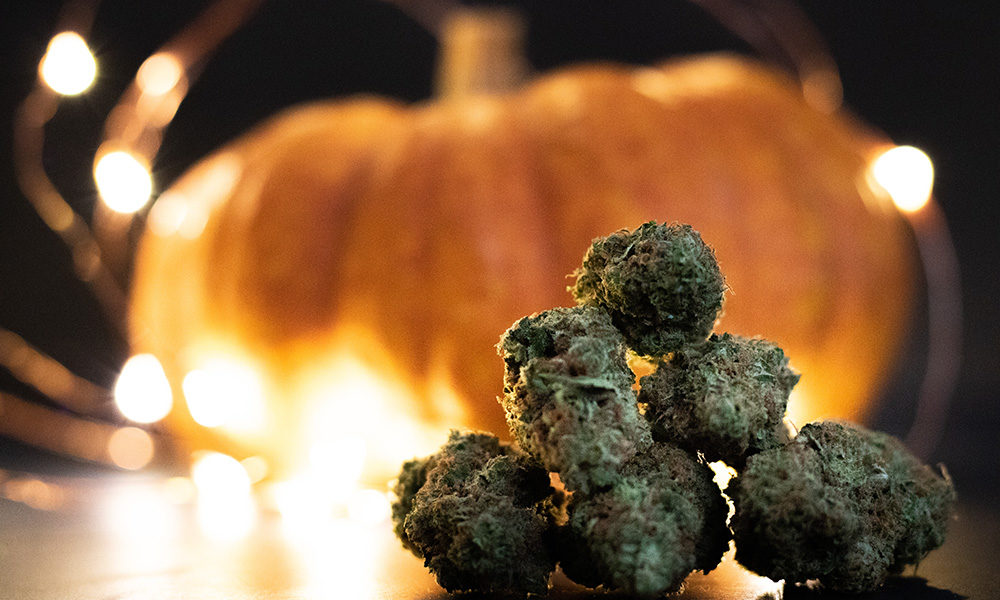 Trick or treating might be out for you, but you can still have some fun that is equal parts cool and creepy. Scary movies are always an easy go-to for celebrating Halloween as an adult without feeling like you’re missing out on anything — especially if you’re not really into the idea of costume parties or haunted house attractions. And if you add some weed into the equation, you have the beginnings of a perfectly content night at home.

Need some help picking out a strain for your movie marathon?

These particular strain pairings are just for the fun of the holiday and not at all based on matching the post-consumption experience with the type of movie you’ll be watching…. which is a good thing. It’s probably not a good idea to try to intentionally smoke strains that will mirror the potential fear and paranoia of watching a scary movie. Instead, these strains will mellow you out, help you chill and just add to the entertainment factor.

Whether you choose the original (which you should) or the remake, there are lots of moments that you’ll be glad you went for a high-CBD indica to calm your nerves. Plus, seriously, what is more peak stoner than smoking a strain that is the exact same name as the main character of the movie you’re watching? Like, really, just pat yourself on the back for this one.

“The Shining” + Jack the Ripper

Jack Nicholson plays Jack Torrance in this classic film about a family’s weird and disturbing winter at a hotel in Colorado. This energizing sativa might be a good choice to help keep you and your friends upbeat during some of the more slow or meandering parts of the movie where you could lose interest. Instead, you guys can giggle your way through until the next scare.

Bust out this oldie but goodie where the infamous David Bowie plays an ageless, but still somehow relatively youthful vampire on the hunt for fresh blood. This movie is definitely more eerie than downright scary and the paired strain works well with keeping you relaxed and feeling good with the calm, methodical pace of the movie.

Mean teens, hella blood and a nightmare prom? Check. Though this film adapted from a Stephen King novel was made back in the ’70s, it’s still just as creepy now as it was then. You can expect lots of cerebral effects with this hybrid strain that will keep you feeling energized as your body settles into deep relaxation.

Wes Craven did a pretty good job at making people never want to fall asleep again thanks to the disturbing and frequent appearances by Freddy Krueger in their dreams and waking life. This creeper strain is good for lasting through the movie and getting you nice and relaxed for a good night’s sleep — minus the nightmares.

Considered one of the best psychological horror movies of all time, this movie is home to the infamous shower scene that has been copied and parodied since its introduction in 1960. Pairing a nice indica strain with this film will have you feeling zenned out and comfortably relaxed even through all the screeching.

Take a break from your “Walking Dead” marathon and throw on this classic movie all about the undead feeding on those still living. Like the name suggests, this strain is super potent and will have you feeling heavily sedated. It’s great for a late night solo smoke where you have every intention of falling asleep right afterward.

This strain is good for stress and anxiety which could help you keep your cool during an intense, high stakes movie about clearing a kid of demon possession. And to help with the residual trauma, Holy Ghost is good for a mood boost that can help you shake that lingering sinister feeling.