You’re reading a copy of this week’s edition of the New Cannabis Ventures weekly newsletter, which we have been publishing since October 2015. The newsletter includes unique insight to help our readers stay ahead of the curve as well as links to the week’s most important news.

After completing what we viewed as a mostly favorable Q2 financial reporting season for the American cannabis companies, the stocks remain mired in a consolidation that has now extended past six months. In fact, the New Cannabis Ventures American Cannabis Operator Index, which is predominantly multi-state operators (MSOs) and single-state operators (SSOs) but also has a few CBD companies, is now down 9% in 2021:

The four largest MSOs by revenue have generally fared better than the index, with GTI rallying more than 23%, Cresco Labs and Curaleaf up marginally and Trulieve down slightly more than the index. ETF AdvisorShares Pure U.S. Cannabis ETF has declined 9.6%, in line with the fall in the index: 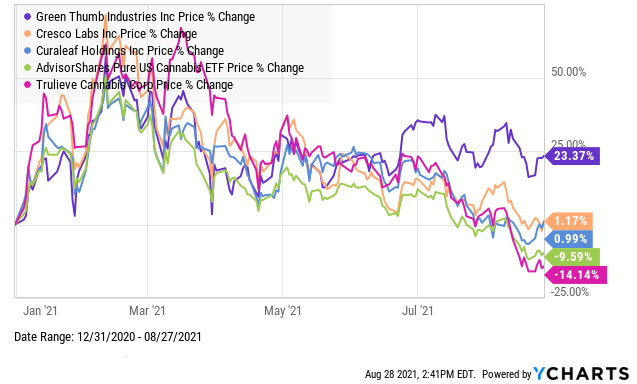 To put things in perspective, the index is up 49% over the past year and 296% since the low in March 2020 despite the weakness in 2021 that has left the index down more than 50% from its close on February 10th.

We think that several factors have contributed to the negative sentiment over the past several months. First, the stocks got ahead of fundamentals in February, so it hasn’t been surprising to see a pullback for merely technical reasons. There are other factors as well. Early in the year, there was institutional interest in the sector, but that seems to have dissipated. Further, federal legalization was viewed as more likely to happen soon early in the year than it is today. In fact, much of the recent discussion has shifted to the threats of federal legalization, a topic we shared here a year ago. Another likely factor has been share unlocks related to go-public transactions and M&A conducted in 2020.

The outlook for the American cannabis industry has never been better. So far in 2021, as we had predicted would be the case, several states have legalized for adult-use through the legislative process, including Connecticut, New Mexico, New York and Virginia. These rollouts, along with New Jersey’s, will fuel growth for years to come, and we expect that other states could join in the next year or two. Relatively new legal markets Illinois and Michigan are poised for strong growth as they mature. California, though almost four years into its regulatory regime, is another market we expect will grow strongly after a slow start. Additionally, the legal cannabis industry has been taking share from the illicit market, a trend driven by convenience afforded through e-commerce.

Looking out, some investors may be concerned that the growth in the industry ahead could lead to equity sales, as there will be substantial capital needed to build out cultivation and production facilities. We think these fears are overblown and point to substantial cash on the balance sheets presently. Additionally, the debt markets have opened to the sector, with lower rates, longer terms and larger amounts of money available. Finally, we are encouraged by the large pool of money potentially available through sale-leaseback transactions. A year ago, Innovative Industrial Properties was the only publicly traded REIT. Today, it has been joined by two that have gone public this year, AFC Gamma and NewLake Capital. All of these companies have cash available to deploy and have held in well during the downturn. AFC Gamma continues to trade above its IPO price, while NewLake, which just went public, has rallied 15% initially.

We pointed above to the fact that the American Cannabis Operators Index has declined by more than 50% since the peak in February. Innovative Industrial Properties, in stark contrast, has rallied by more than 14% since then, hitting an all-time high on Friday: 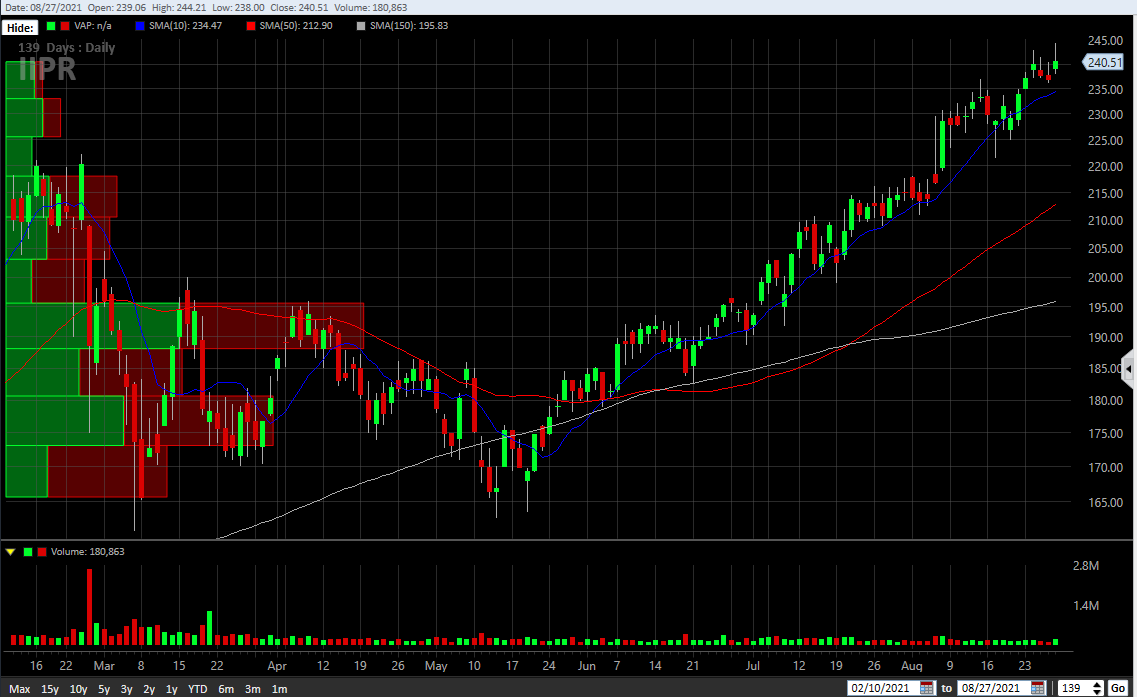 The strength in the REIT stocks points to the likelihood that they will be able to continue to raise and deploy additional capital for sale-leasebacks or mortgages. Along with this funding source, the increasing availability of debt capital should allow the MSOs to build out in the newly legalizing states without having to sell equity. Many of these companies are generating positive cash flow, and some are generating free cash flow presently, and the revenue growth and margin expansion over the next year could also reduce the likelihood of having to tap the equity markets to fund expansion, relying instead upon their own cash as well as sale-leasebacks and debt.

When investors see a company like HEXO Corp destroy its stock with a massive equity raise at a low price, it can instill fear that others might follow. The dynamics for MSOs are very different from those for the large Canadian LPs, and we don’t think that the disastrous equity raise by HEXO Corp has any implications for MSOs. We expect that most American cannabis companies will avoid selling equity at the current prices and look for announcements over the balance of the year regarding funding deals through debt and sale-leasebacks.

TILT Holdings has transformed into a more focused company since its debut in 2018. Through a reset and maturation of the business, TILT is now simply helping cannabis businesses build brands. The company supports multi-state operators, licensed producers and cannabis brands worldwide through a diverse portfolio of technology, hardware, cultivation and production assets. Today, the company’s services spans across 36 states in the U.S., as well as Canada, Israel, Mexico, South America and the European Union. 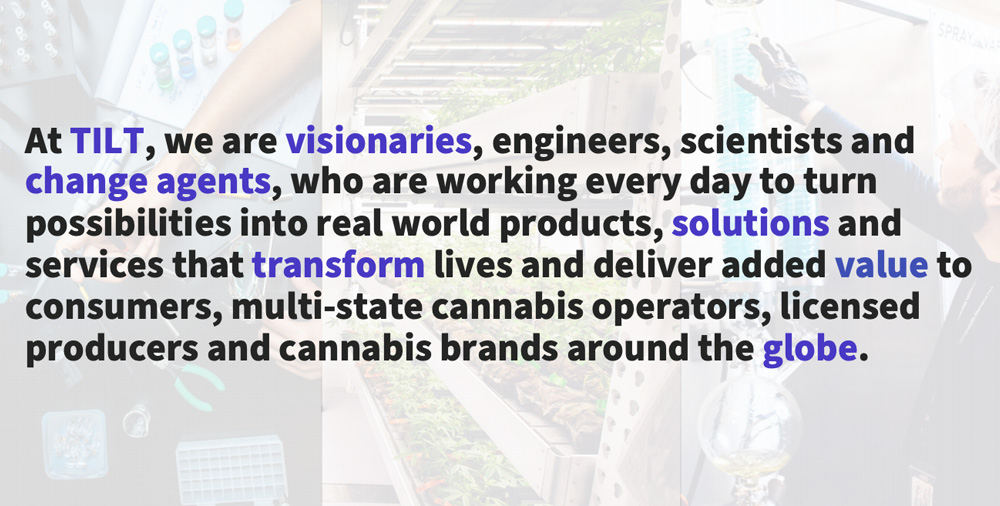 Get up to speed by visiting the TILT Holdings Investor Dashboard that we maintain on their behalf as a client of New Cannabis Ventures. Click the blue Follow Company button in order to stay up to date with their progress.

New Cannabis Ventures publishes curated articles as well as exclusive news. Here is some of the most interesting business content from this week:

Get ahead of the crowd! If you are a cannabis investor and find value in our Sunday newsletters, subscribe to 420 Investor, Alan’s comprehensive stock due diligence platform since 2013. Gain immediate access to real-time and in-depth information and market intelligence about the publicly traded cannabis sector, including daily videos, weekly chats, model portfolios, a community forum and much more.

Use the suite of professionally managed NCV Cannabis Stock Indices to monitor the performance of publicly-traded cannabis companies within the day or over longer time-frames. In addition to the comprehensive Global Cannabis Stock Index, we offer a family of indices to track Canadian licensed producers as well as the American Cannabis Operator Index and the Ancillary Cannabis Index.

Stay on top of some of the most important communications from public companies by viewing upcoming cannabis investor earnings conference calls.