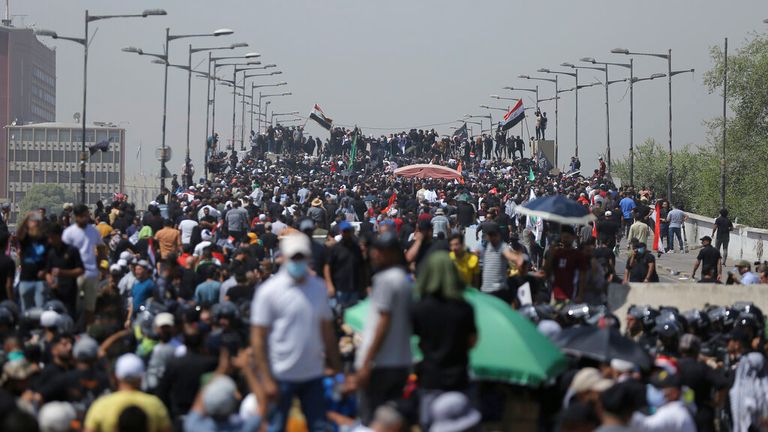 Thousands of protesters have breached Iraq’s parliament for the second time this week.

Followers of influential Shiite cleric Muqtada al-Sadr are demonstrating against efforts by Iran-backed political groups to form the next government.

Security forces deployed tear gas and sound bombs to prevent people from entering the Parliament building in the capital Baghdad.

But protesters used ropes to tear down cement barricades leading to the gate of the Green Zone, which houses official buildings and foreign embassies.

The protests erupted as Iraq continues to face political gridlock, with ordinary people suffering the most as a result of the gridlock.

Al-Sadr’s party came first in the general elections in October, but did not get a majority. Nine months later, no official government has been formed.

The party left the talks in June after failing to form a government without Shiite rivals, mainly backed by Tehran.

The withdrawal gave the Coordination Framework bloc, led by Shiite parties backed by Iran and its allies, the majority needed to move forward.

Hundreds also stormed the Iraqi parliament on Wednesday in protest of the nomination of Mohammed al Sudani for the Iraqi government by the Coordination Framework.


Image:
Protesters gather on a bridge leading to the green zone in the Iraqi capital, Baghdad. Image: AP

Al-Sadr insisted that any new government should be free of the foreign influence and corruption that has plagued Iraq for decades, and has promised civil unrest if the new regime is not approved.

One person in the crowd, Raad Thabet, 41, said: “We came today to eliminate the corrupt political class and prevent them from holding a session of parliament and to prevent the framework from forming a government.

“We answered al-Sadr’s call. We will go to the Green (Zone). No matter the cost.”

Another protester, Abu Foad, said: “We are asking for a corruption-free government and these are the demands of the people.”

The political stalemate is exacerbated by the fact that al-Sadr loyalists are involved in running the country and hold powerful positions within Iraq’s ministries and state organizations.

Acting Prime Minister Mustafa al-Kadhimi has urged the protesters to “withdraw immediately” while urging people to show calm and restraint.

Read more: Demonstrators violate the parliament in Baghdad in protest of the nomination of the prime minister in Iraq 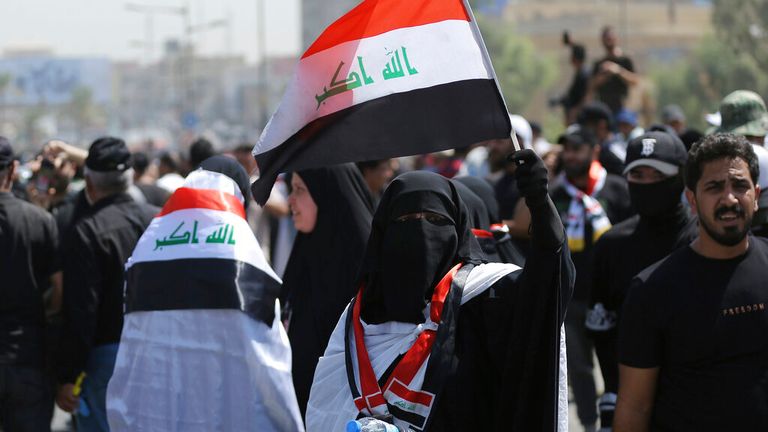 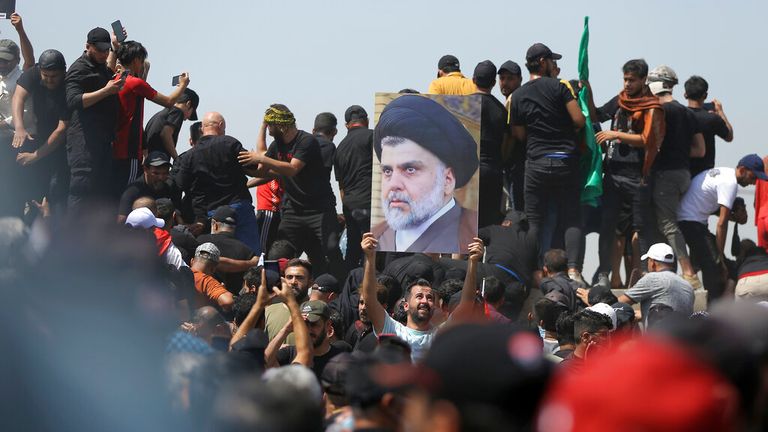 Image:
A protester holds a sign depicting Muqtada al-Sadr on a bridge leading to the Green Zone area Photo: AP

Why is Iraq in a political deadlock?

The selection of a president and prime minister has been a painfully slow process since Saddam Hussein was toppled by the US-led invasion of Iraq in 2003.

In March of this year, the Iraqi parliament failed to vote again for a president following a boycott by Iran-backed groups.

Al-Sadr had hoped that Rebar Ahmed Khalid, a veteran Kurdish intelligence officer and interior minister of Iraq’s autonomous Kurdistan region in the north, would be elected.

But only 202 members out of 329 attended the vote – less than the two-thirds minimum needed to elect a new president – while 126 officials boycotted the session.