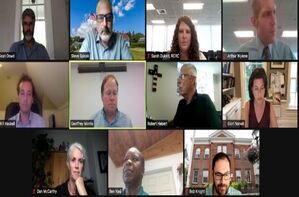 On July 1st, Connecticut became the 19th state to legalize recreational marijuana. Left with the mysterious future of how cannabis will be sold retail starting in 2022, the Ridgefield Enocomic & Community Development Commission (Ridgefield ECDC) hosted a public Zoom information session about this subject on Monday evening.

To start the call, State Senator Will Haskell explained the ins and outs of the Connecticut bill passed on July 1st that legalized recreational marijuana and allowed for the retail sale of the product. As marijuana is one of the most regulated industries in the country, there was a lot of information to take in. People are now able to grow cannabis with some limitations, possess one and a half ounces of marijuana, and hold an additional five ounces in their homes or cars. Like cigarette smoking, marijuana smoking is only allowed in certain areas. Haskell wanted to make it clear that if these rules are broken and boundaries are crossed there will be consequences.

Just like with alcohol, the consumption and purchase of marijuana is only an option for those that are 21 and over and this will be hard to bypass for scheming kids. Strict rules for dispensaries will make advertising only possible with evidence that at least 90% of their audiences will be 21 or over. Public safety is of the utmost importance in the bill and law enforcement now has all of the necessary material to prevent and stop people from driving under the influence of marijuana.

In an effort to try to make up for the war on drugs that negatively impacted minorities and their communities, the rollout of retail cannabis will be done in an “equitable manner” by prioritizing dispensary license applicants who have been severely affected.

State Senator Haskell added that one of the most significant concerns from the opponents of the bill was that marijuana’s legalization would send the wrong message that it is perfectly fine to use. He reiterated that this is not the case and there are many dangers surrounding the drug that the public must be aware of. “Legalizing is not normalizing,” he said. The bill, he explained, was only passed with the knowledge that people in Connecticut have been smoking pot illegally for years and the state wants them to now do it safely.

With California and Massachusetts legalizing weed in 2016, the two states and their people have a lot more experience in the field of effective retail cannabis. This made the presence of retail marijuana experts from California, Sarah Dukett and Arthur Wylene, and Massachusetts, Meg Sanders, giving advice for the 2022 start of retail cannabis in Connecticut very helpful.

Massachusetts dispensary owner Meg Sanders stressed the importance of Connecticut encouraging and allowing marijuana businesses to thrive because of the jobs and revenue they create and their positive impact on the economy. For example, Ms. Sanders explained that Massachusetts and California do not have as high retail marijuana advertisement requirements as Connecticut. She also wanted to voice the risk involved for citizens starting weed retail as this process has been popularly called “a license to lose money.” Prospective business owners must be properly informed about when and where to start their businesses.

RCRC members Sarah Dukett and Arthur Wylene from California spoke from experience about the fact that the rollout of retail cannabis is a long process and should not be rushed. They say that Connecticut’s strategy of leaving local communities to make their own decisions at their own pace on how cannabis will function in their areas is wise as every community is different. Changes, they explained many times, are innate in this weed legalization process and Connecticut, like California did, will not get it right immediately. To fix this, Connecticut will rely on the people to provide advice on how to move forward.

At the end of the call, opinions that were sent in from the public were read aloud and questions were answered allowing citizens to utilize their right to advocacy. “[The marijuana legalization] will put a stench on this town,” one Ridgefield resident stated strongly in an email to the ECDC. Another worried about underage people purchasing cannabis products. The thoughts from the public were wide-ranging and provided a multitude of different perspectives for our political leaders to take into account in their decision-making.

Most Americans believe that marijuana should be legalized. Now that Connecticut has answered this call from the majority of its citizens, the only task left at hand is to intentionally and successfully put this legislation into effect. Because of this Zoom information session and the many similar ones to come, Connecticut is now more informed to accomplish this feat.