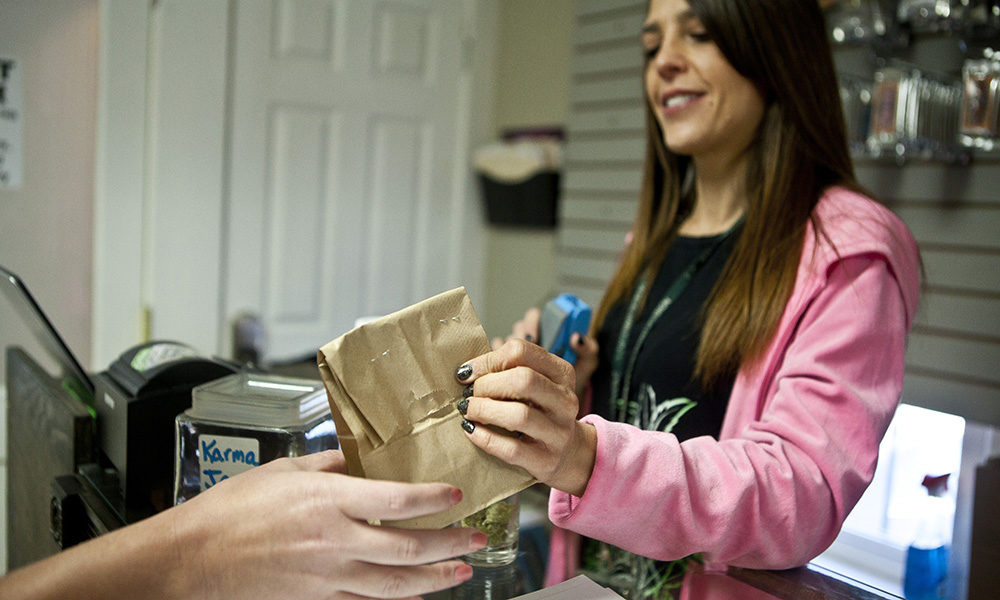 Credit card powerhouse Visa is cracking down on “cashless ATM” transactions processed by cannabis dispensaries and other retailers, saying the popular workaround for credit and debit card payments is prohibited and subject to unspecified penalties.

In a compliance memo sent this month to banks that process payment card transactions for merchants, Visa, the world’s second-largest payment card processing company, noted that it is “aware of a scheme” in which point-of-sale (POS) terminals known as cashless ATMs are used to process purchases. Instead of processing the sale as a purchase, however, the merchant codes the transaction as an ATM withdrawal.

“Cashless ATMs are POS devices driven by payment applications that mimic standalone ATMs. However, no cash disbursements are made to cardholders,” the December 2 memo obtained by Marijuana Moment explains. “Instead, the devices are used for purchase transactions, which are miscoded as ATM cash disbursements. Purchase amounts are often rounded up to create the appearance of a cash disbursement.”

Due to federal banking and money laundering laws that leave traditional financial services largely unavailable to legal cannabis businesses, many marijuana dispensaries utilize the cashless ATM solution to accept credit and debit cards as payment for customers’ purchases. Instead of requiring customers to pay by cash, retailers who utilize the cashless ATM process can offer the convenience of accepting payment cards at the cash register. The option is also more secure for dispensaries than handling large amounts of cash, which puts them at greater risk of armed robbery and other crime.

Although Visa did not specifically mention cannabis dispensaries, the memo noted that cashless ATMs “are primarily marketed to merchant types that are unable to obtain payment services—whether due to the Visa Rules, the rules of other networks, or legal or regulatory prohibitions.”

Visa warned that miscoding POS purchases as ATM withdrawals violates requirements that all transactions processed through the company’s networks contain accurate data. Visa also noted that processing transactions with inaccurate information such as a misidentified merchant or incorrect business location is also prohibited. Although Visa was not specific about the repercussions of processing illegitimate cashless ATM withdrawals, the company noted that such transactions “will be subject to non-compliance assessments and/or penalties” or “subject to further compliance enforcement.”

Morgan Fox, media relations director for the National Cannabis Industry Association, says that it “is unfortunate that Visa is unwilling to work with the cannabis industry, which is legal in dozens of states and represents billions of dollars in economic activity, at a time when this country needs all the financial options it can use.”

But it is even worse that they are trying to discourage alternative solutions that are primarily utilized by small businesses to protect themselves and their customers from theft and violent crime,” Fox told Marijuana Moment.

“The announcement amounts to intimidation,” Fox added, “and will directly put cannabis businesses at even greater risk that could cost lives.”

“They are doing everything they can to ensure transactions are taking place safely and legally, but they keep running into these problems due to the illegal status of cannabis under federal law,” Sederberg wrote in an email to Cannabis Now. “Unfortunately, it is smaller businesses and social equity applicants who are at the greatest disadvantage.”

To address the challenges accessing financial services faced by cannabis businesses, the industry has long sought a legislative solution from federal lawmakers. Under the Secure and Fair Enforcement (SAFE) Banking Act, federal banking regulators would be prohibited from penalizing banks that choose to serve cannabis firms doing business in compliance with state law. The legislation was initially introduced in the House of Representatives in 2013 by Democratic Rep. Ed Perlmutter of Colorado, who has reintroduced the bill each subsequent congressional cycle.

The SAFE Banking Act was passed by the House of Representatives in 2019 and again last year as part of COVID-19 pandemic relief legislation. The House passed the bill again in April of this year as a standalone bill and included the measure in this year’s defense authorization bill, but the version of the legislation passed by the Senate this week does not include the cannabis banking provisions.

Tom DiGiovanni, the chief financial officer for California vertically integrated cannabis company Harborside Inc., noted that a lack of access to traditional financial services has led the cannabis industry to create innovative workarounds for banking and payments. But often, the solutions are less secure for both businesses and customers.

“More credible fintech solutions than the ‘cashless ATM’ that have hit the market have been a step in the right direction, but this does not lessen the urgency of the need for the government to intervene and address the dire situation of cannabis banking,” DiGiovanni wrote in an email. “As we’ve seen in our hometown of Oakland, businesses like ours are at constant risk for burglary or shutdown (as Visa is suggesting) until a solution like the SAFE Banking Act is passed.”